Built from the 1/3-scale Balsa USA kit, Mike Gross Sr.’s aircraft has a ready to fly weight of 46 pounds, including the 3 pounds of lead ballast added to the firewall. Its 3W-85xi-CS engine, equipped with a 3W header pipe and canister muffler system, easily turns a Xoar 28×8 propeller. Mike’s radio is a Gen 2 Spektrum DX18 transmitter and receiver with Savox SA1231SG and SC0251MG servos. Mike also has aboard three A123 2500mAh LiFe battery packs and switches from NoBS Batteries. The 9.3-inch vintage wheels are from Du-Bro and the aircraft is equipped with a Sullivan Skywriter smoke pump and a Bad Dog smoke injector. 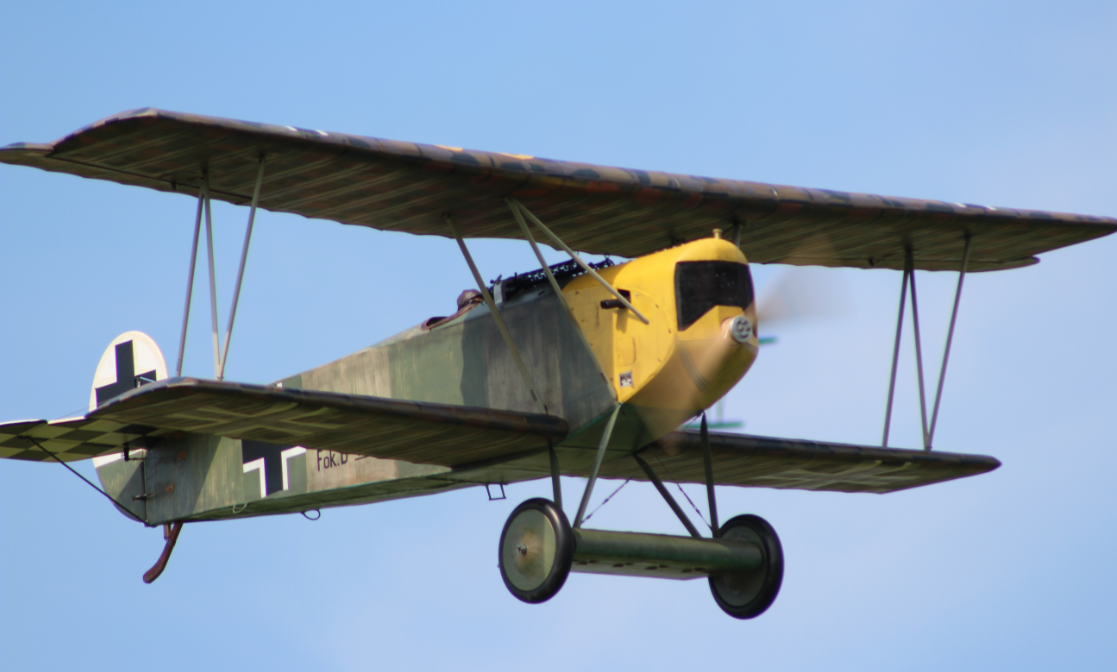 The covering on the wings is 1/3-scale printed four-color Lozenge Linen fabric from Glenn Torrance Models, while the fuselage is covered with 2.7 oz./yd. unbleached and softened linen. All of the linen has two coats of nitrate dope followed by six coats of butyrate dope. Mike finished all of the painted surfaces with Klass-Kote epoxy paint, and he drew the lettering and markings with Red 5 Designs paint masks. Mike created the weathering with stains and acrylics, all of which he protected with a final finish of two coats of Min-Wax oil-based polyurethane.
The Fokker’s scale paint scheme is that of pilot Lt. Alois Heldmann’s aircraft in the spring and summer of 1918. The fuselage bottom and axle fairing are pale blue with the standard factory applied fuselage streaky green, with a yellow nose and checkered top and bottom stabilizer and elevators. Also of interest is that in July and August of 1918, Lothar von Richthofen (the Red Baron’s brother) flew several sorties with this aircraft.