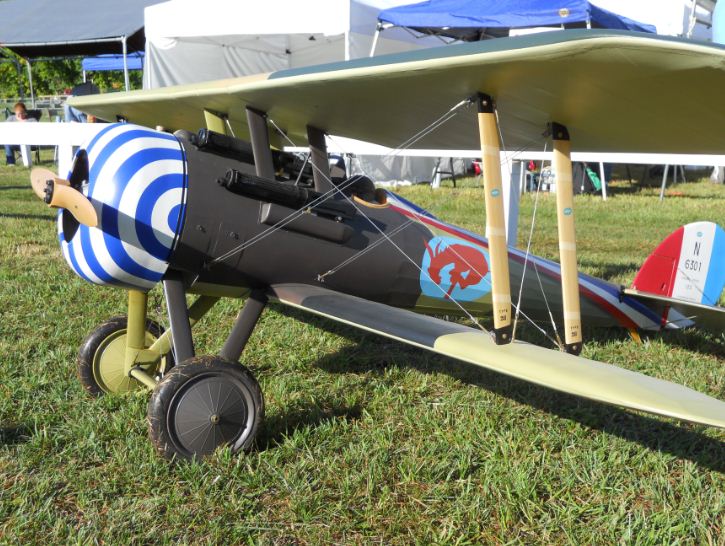 The Nieuport 28C1 was America’s first fighter. Relegated to a backup role by the French in the later days of WW1, American pilots learned to love the speedy and maneuverable N28. It gave America its first official air to air victories in WW1. Later the Nieuport 28A served as a fighter trainer for U.S. pilots earning their wings in Europe. Preserved examples of the Nieuport 28A can be found in the Smithsonian Air and Space Museum and the U.S. Air Force Museum in Dayton.  The only surviving example of a combat flown Nieuport 28C1 is in Switzerland. 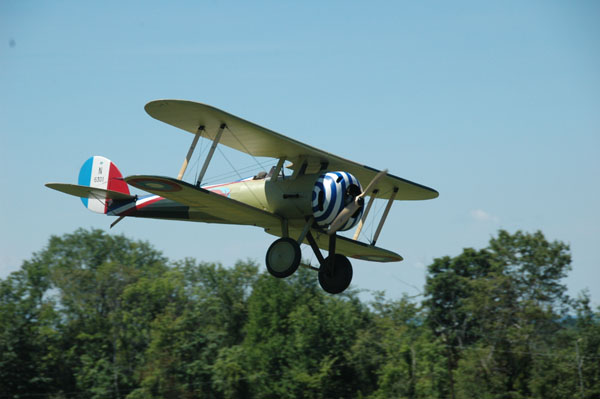 I always wanted to build a serious scale WW1 airplane and I wanted it big. So I started with the 1/3-Scale kit from Balsa USA. All of the wood was of good quality and all the ribs and formers are die-cut. The cabane and landing gear wires are made from prebent music wire with some sheet metal parts and a lot of hardware. I used the full-scale plans and penciled in my various changes to make it more scale like in appearance.The kit also has a very nice spun aluminum cowl. The kit was a great starting off point from which to add my scale changes and modifications so this is a description of what I changed, and why. 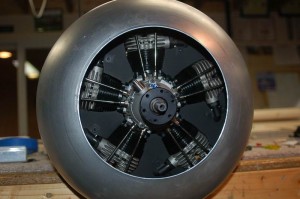 The first challenge was figuring out how to install the 9.8 lb, 5-cylinder, 150cc, 8.5 hp RC Showcase radial engine. The second challenge was ensuring access to the large ignition module and its switch and battery. The solution was to design and install an inset firewall with a second, removable firewall with mounting ring that the engine would bolt to. The second firewall was removable via four 8-32 bolts and T-nuts, allowing easier servicing of the engine. The mounting ring was offset and angled to produce down and right thrust while still locating the prop shaft in the center of the cowl opening 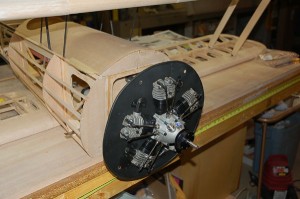 I also added a 1-piece circular baffle inside the cowl that I fabricated from aluminum to ensure that any air entering the cowl would be directed over and past the engine cylinders as cooling air exit area was very limited. 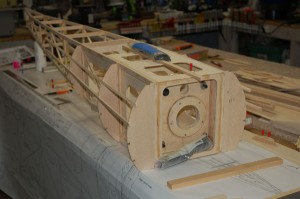 The rest of the fuselage was built fairly stock, requiring that I change only the locations of the top rear stringers and using some carbon fiber laminated along the main longerons for peace of mind. Balsa USA uses a nice fixture to assist in getting the cabanes soldered up correctly, I used both the recommended soldering iron and a small torch for the landing gear and the cabane struts. 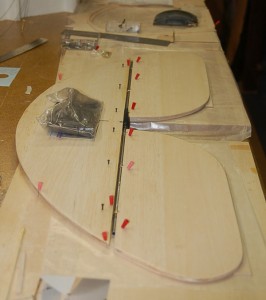 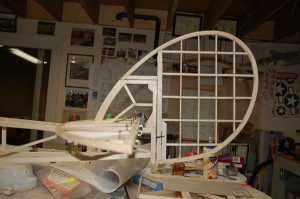 Other changes included making the tail feathers removable, (for servicing and possible shipping.) I also made the surfaces “airfoiled” then sheeted and fabric covered as the full scale aircraft was. I used 1/16-inch balsa sheeting over an “egg crate” base structure.

I used an aluminum arrow shaft forthe elevator leading edge and used brass tubing and brass sheet stock to fabricate scale strap hinges. The hinges have small holes in them to allow for oiling the brass-to-aluminum bearing surfaces. Minor outline changes were made as well. 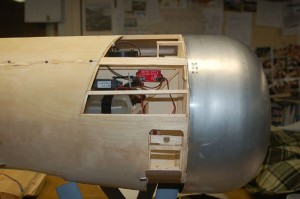 I also made all of the fuse hatches functional for scale access points for the engine ignition module and batteries and switches for the engine and radio(s). I used three A123 2400mAh airborne battery packs  from NoBS Batteries.  Counting the servo hatch in the belly I made five functioning hatches for the plane.

After reading an article on preventing aircraft loss with redundancy systems I used this mindset ducting the construction. Given that the rudder and elevator are pull-pull units in the full scale (the stock kit can be built push-pull) that posed a quandary. The solution was as sliding tray system from Don’s Hobbies that allowed two servos to drive each surface. I ran one of each to a different 2.4GHz Airtronics receiver which in turn had its own battery and switch. Thus if one battery or switch or receiver fails, in theory I have half the available servo throw and power available to make it back to base. 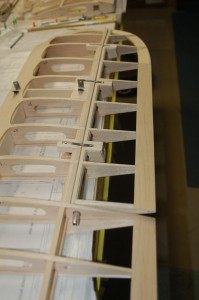 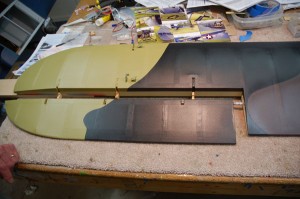 Changes to the ailerons were a major part of this build. I used the Hardesty drawings to design mine as close to the full scale as possible. The hinges were done with three part bearing blocks. One part is glued into the wing behind the TE while the other two parts surrounded the aluminum arrow shafts that were glued into the LE of the Ailerons. (Picture N28 Build C001).  The hinge blocks are held tight to the TE by brass straps. Arrow shafts were also used as torque rods to transmit the servo force out to the ailerons, with servos hidden under the pilot’s seat. This necessitated a machined coupling system as the outer wing panels are removed as a unit for transportation.

One final note, I built this plane while posting its progress online, and that resulted in significant help from a few new friends I had never met. Let me end by saying thanks to all who helped, and to Rick Colvin and Doc Geezer (AKA Robert Morrison) in particular. Y’all made this into a much better plane than I ever could have. 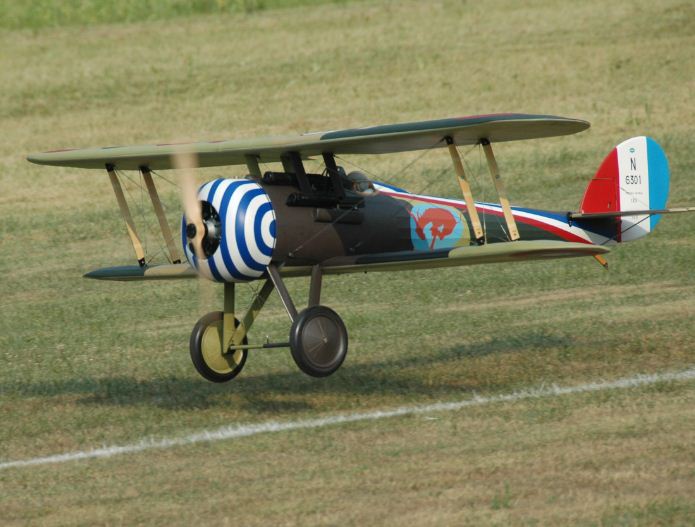 I am still getting used to this plane. Take-offs are pretty easy, just ease into the power or she’ll go left on you. My first landings were “good” but not “great” if you understand what I mean.  The RCS Moki 150 has a learning curve with it, particularly the amount of power it provides. Plenty of rudder throw helps. It gives more than enough power for this plane, and the sound the sound the sound!! The realism factor is off the charts.

I am looking forward to the Rhinebeck skies! 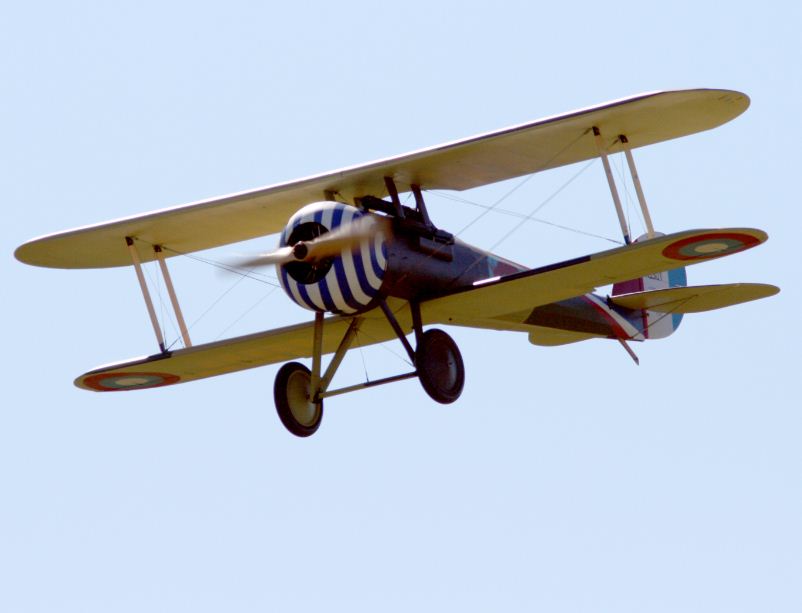 Stability: No tail weight was needed, the combination of the heavier engine, plus the servo trays behind the cockpit and the tail feather sheeting and covering got her close and I placed the three batteries up forward to fine tune the balance point. In the air we were happy with it and the ground handling was fine as well.  We did end up using a bit of down elevator trim, I must not have added enough down thrust to the engine.

Aerobatics: I’m still learning this plane, but we have found that I have enough rudder and elevator authority for basic aerobatics. More aileron throw would be nice, I had more than the kit recommended amount before covering and painting, but somewhere along that process wound up with less. While we had enough for normal flying I would recommend ensuring that you build at least the kits recommended 2” up aileron, the stock 1” down is probably fine.

Glide and Stall: This a big draggy biplane, wings and wires and fixed gear and a big round engine up front so hold power until final and even then don’t chop the throttle and try to float down, some power is needed until you are in ground effect, then pull it back and flare gently. Once the wheels are down plant the tail skid and use rudder to keep her straight. In the air stalls are no problem, just give yourself some altitude. The Airtronics SD10G has the “throttle cut” feature, so you can dial in a good idle and leave it alone, this really helps to maintain power and airspeed, particularly on landing.

My goal was to take a solid airframe, add this engine and then dress it up for Rhinebeck, Warbirds overDelawareand other scale fly-in events. This kit allowed me to do just that. I added lots of scale goodies like gun tubs from fiberglass moulds, real rivets and a reinforcing ring on the cowl, plus a hand made wicker seat and leather stitching around the cockpit. The Solartex covering was dressed out with rib stitching and rib tapes and perimeter tapes from Pink-It.net. Lastly 13 colors of latex paint were added for the base camouflage and the national, squadron and personal markings. Paint masks from GetStencils.COM greatly aided the painting process. None of this was needed to complete this kit, but for me building is half the fun. 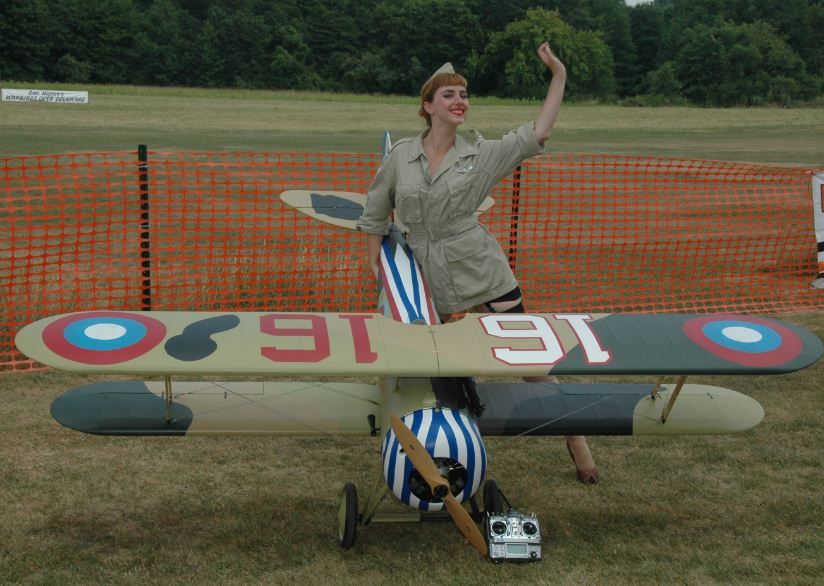 Model: Nieuport 28 (Based on the Balsa USA kit) 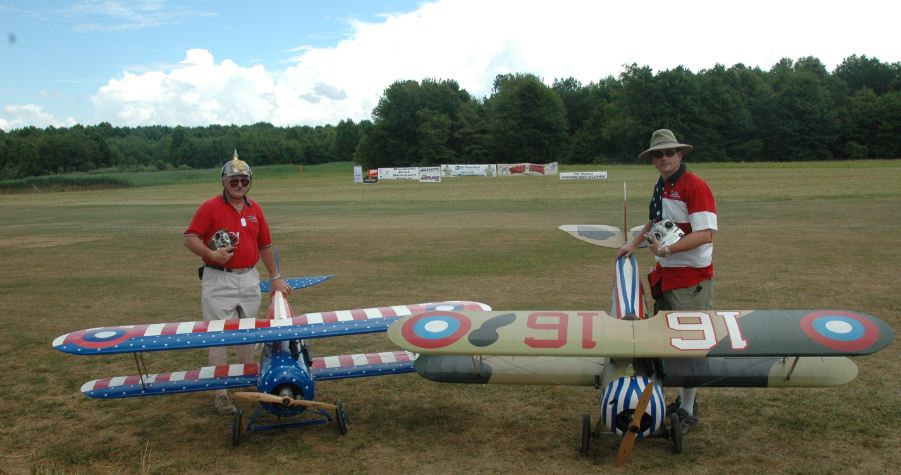 McMaster Carr – rivets and aluminum plus some fasteners