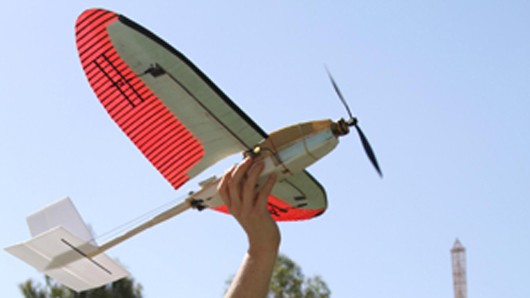 UAVs require a complex system of satellite link up to help them fly over enemy terrain.  But many of them start out as remote control prototypes.  A good example of this is this story that appeared on Gizmag showing the future of UAVs with this RC prototype produced by the engineer students of UC San Diego. I wonder how many of these we can get for a million dollars.

Here is the complete story by Noel McKeegan

The role of unmanned aerial vehicles (UAVs) has expanded rapidly in both military and civilian circles over the past decade and although most designs to date are miniature versions of conventional aircraft, we can expect to see much more radical examples emerge in the near future. In developing this next-generation of UAVs engineers are looking to go beyond the limitations of fixed wing and rotary wing aircraft and to do it, they are turning to nature’s ultimate flying machines – birds. We’ve already seen seen flapping-wing micro-aircraft, robotic seagulls and even a design based on a pterodactyl. Engineers at UC San Diego are furthering this approach with research into variable-wing techniques that could result in a bird-like UAV capable of spot landing.

The ultimate goal of the UC researchers is to create a UAV that can both cruise efficiently like a fixed wing aircraft and land on a perch. To achieve this they are studying the wing morphing and flapping techniques used by birds.

“One of the key behaviors observed in the birds was their use of wing sweep for pitch control in both forward flight and stalled landing approaches,” she UC graduate student Kim Wright. “Birds can move their wings in a myriad of ways, providing a level of aerodynamic control that is unmatched by UAVs.”

A team led by Wight and mechanical and aerospace engineering professor Tom Bewley analyzed in the movement of birds like barn owls and hawks in slow motion to investigate how wing morphing and flapping can be used for spot landing.

The result is a a small remote controlled UAV made primarily from balsa wood, fiberglass and foam like a standard RC hobby plane. Carbon fiber was used for the wings and variable wing sweep was achieved by introducing carbon fiber tubing for the shoulder joint structure.

The researchers have tested the plane using computer modeling and report that this has validated the concept of using wing sweep for pitch control of the aircraft. The next step is to combine wing twist, flapping or other wing morphing approaches to achieve autonomous perching.

“Combining these aspects into a fully actuated, intelligent UAV would be the ultimate goal,’ said Wright. “A small UAV that could maneuver and land like a bird would be a valuable tool for surveillance and search and rescue. This project has brought the aerospace community a small step closer to that goal.”