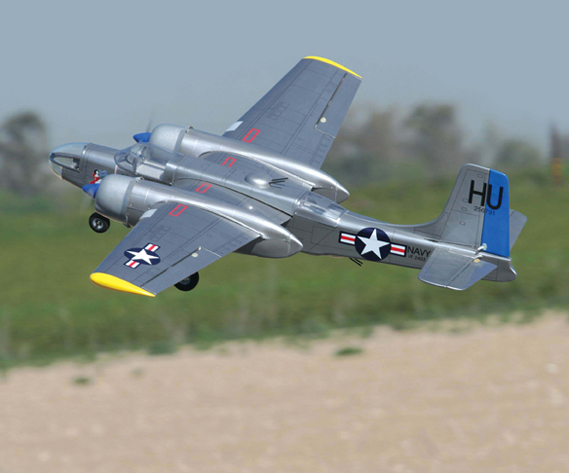 The twin KMS outrunners fit perfectly on the adjustable mounts made by Kyosho. The mount is held to the bulk head with blind nuts. Glued cowl mounting blocks are another great convenience.

VQ MODEL, now distributed in the U.S. by Global Hobby Distributors, is continuously working to offer RC airplane enthusiasts more models for those necessary hangar additions. The A-26 Invader is a great looking twin-engine, semi-scale warbird bomber. It follows the full-scale airplane’s outline fairly well and is a must-have for any scale enthusiast’s warbird lineup! Constructed of balsa, spruce, and thin plywood, the VQ A-26 Invader is covered in an adhesive-type printed covering that is loaded with detail. This well-made ARF includes everything you’ll need for airframe completion: built-up and covered wings, fuselage and tail feathers, bent wire landing gear, painted fiberglass cowls, and a large bag of miscellaneous fasteners. There are also plenty of molded plastic parts like the canopies, nacelle covers and gun turrets. A 21-step illustrated guide and decal sheet are included to aid in building and decorating the A-26.

There are included fuel tanks, clunks, and glow engine mounts, all of which I immediately set aside as this Invader is going to be E-powered for clean and quiet enemy infiltrations. A pair of brushless motors, ESCs and LiPo batteries will replace the required two glow engines, fuel tanks, and fuel. The conversion to electric power should be fairly simple, especially since I had just read a recent article in Model Airplane News outlining twin electric setups. Even still, I recommend this model be built and flown by the experienced modeler due to the twin power plants and level of involvement needed for the model’s completion.

I found this to be the ideal location for the two Impulse LiPos. The magnetized cover allows quick battery swaps and shows off the printed lines in the covering. The supplied deals trim out the canopies well.

Before attaching the turrets, I cut twin machine guns to size (in the form of carbon-fiber tubes) and fit them within minutes adding the desired effect.

After removing the plastic bags and allowing any movement in the wooden pieces, I looked for areas of loose covering; there weren’t any. With this many molded plastic pieces, I realized I had better get out my curved scissors and get to work. Main and rear canopies and the gunner station �glass� all need to be trimmed, as do six nacelle cover pieces. All of the A-26’s hinging has been done at the factory using nylon barrel-type hinges. I verified good bonds, and all hinge attachments were solid. There are provisions for optional retracts, but I went with the supplied fixed gear to save weight. Ply and hardwood gear reinforcements are assembled then adhere to the gear area in the wing with epoxy and screws. Aileron servos fit into pockets located within the wing halves. Screw-on covers conceal all but their servo horns. Two 20-inch extensions are required to make the travels from aileron servo bay to fuselage interior, and I tied all connections to keep things plugged in.

For my propulsion system, I chose twin KMS 2820/04 outrunners coupled to twin Castle Creations Thunderbird 54 ESCs. I installed the motors onto two adjustable motor mounts and attached these units to the bulkheads with the included blind nuts. There is plenty of room and pull strings to locate the myriad of wires you’ll be routing. Two precut holes on the wing bottom allow the receiver leads to pass through, and I cut two small holes on the wing’s top for the battery wires. After installing all of the electronics and running all wiring, I screwed on the cowls and nacelle covers, and glued on the nacelle endcaps with CA. The wing halves join with the included spar and epoxy. A wing cover that serves as the top of the fuselage is actually my battery compartment in disguise. I added magnets rather than glue to secure it in place, thus rendering it removable. With the wing complete and mounted, I epoxied the tail feathers in place. Servos screw into precut openings within the fuselage and are connected to wire control rods that snake through factory installed plastic tubing. Molded control horns fasten to the control surfaces with metric screws. Assembly of the steerable nose gear, attachment of all remaining plastic via screws or glue, and adding half of the supplied decals finished the airplane.

Total construction time with fixed gear was 20 hours. I added a couple of things like carbon-fiber tube guns and an additional magnetic hatch for nose gear doors; this is where I added weight to obtain proper CG. The VQ Model A-26 has been my most challenging build to date due to planning the electric conversion and the vast amount of molded pieces, but the result was well worth the effort. I’m sure experienced pilots will thoroughly enjoy this great-flying, great-looking warbird.

Bring your AMA card to the local flying field or go out to that cool desert spot with plenty of open area and a hard surface. The rollout begins with extremely responsive taxiing. As I advanced the throttle, the twin brushless motors pushed air over the flying surfaces and they awakened almost instantaneously. I made sure to build plenty of speed before attempting my climbout; once I pulled back on the elevator stick, the Invader leaped into the air climbing with authority. Landings are predictable and require you to find an accommodating sink rate, but it becomes obvious and easy to lock in. A balance of power, elevator, and aileron inputs will keep the plane on track. Fly this model all the way in and stay easy on the controls after touchdown to avoid over-steering.

STABILITY Not once did the stability of the A-26 become compromised. While flying at � throttle or more, the plane demonstrates exceptional solidity and presence. I will be adding some expo to the elevator as it is a bit sensitive to inputs.

TRACKING The maiden voyage had me quickly dialing in five clicks of down-elevator and four clicks of right aileron. This provided a perfectly linear flight path while flying at my preferred throttle setting. A dual rate setting on the rudder or some expo will be added to smooth out my taxiing. The steering on the ground during taxiing is very responsive and it is easy to put the model where you want it. When rolling at higher speeds, the huge vertical stabilizer and rudder come to life and keep things on point.

AEROBATICS I didn’t attempt any aerobatics but I’m sure you daredevils out there will be able to loop and roll this airplane; just be sure to have plenty of altitude and build up a little speed first.

GLIDE & STALL PERFORMANCE The A-26 Invader’s glide path is long and very scale-like. Keep the nose down and avoid pitching up or �porpoising,� which can lead to a stall or worse. Mild stalls will break with the nose falling slightly followed by a wing. Power up, point the nose back down, and regain some airspeed before attempting to climb again.

VQ Model has recreated the famous A-26 Invader in a nice size and with great detailing. It is a very honest flying model airplane and should be flown in a scale manner. This electric-powered twin sounds phenomenal strafing by and simply looks awesome in the air.