I started flying RC in 1992, when I noticed that a friend at work had a picture of a model airplane on his desk. He taught me to fly, and I was hooked.
My new favorite flier was a 60-inch-span Ugly Stik I found at a swap meet. I replaced the engine with an O.S. .70 4-stroke and made a few other changes. While doing touch and go’s one day, I wanted a longer approach and made my down leg turn quite a ways out. As it started to lose altitude, the plane disappeared. It took me a second to figure out that it had flown behind a line of trees, and just as I started to pull up I heard that dreaded sound of smashing balsa. That was the end of the Ugly Stik and the beginning of my story.
A couple of my flying buddies and I went to the woods to recover what was left of the plane and found bits of red all over the place. I found the fuselage with some servos and the receiver, and the fuel tank had gone the farthest. I searched and searched, but no engine. Then I thought that if it wasn’t on the ground, it might be in a tree. About 30 feet up, I saw something black and something that looked like raw wood: the prop and the firewall.
I am a few years past the tree climbing age, and the woods were too dense to bring in a ladder. My first attempt at recovery was to screw three pieces of 3/4 PVC together in the woods and use it to knock the engine out of the tree. Note: holding 10 feet of PVC straight up in the air is easy. Trying to hold 20 feet of PVC straight up is not. It was all over the woods and I never got close to the engine.
Try two. At Walmart I found an inexpensive slingshot and some fishing weights, and luckily, they had a hole right through their centers. I tied some string to the weights and tried shooting them almost straight up in the sky. The first shot went high. This was going to work! In the woods, though, the string got hung up on limbs or twigs so the weight would go up about 10 feet and fall back to earth. Back to the drawing board.
One of the guys that I fly with thought that a fishing rod could cast a weight up to the engine. A good idea but swinging a fishing rod in the woods would be hard, and my fishing skills are not exceptionally good. Then I remembered some guys on YouTube fishing with crossbows. I found a pack of arrows and an inexpensive, 60-pound, shoulder-stock crossbow under $30. I used hose clamps to mount a $5 fishing reel to the crossbow. I drilled a small hole in the back of each arrow, behind the feathers, so I could thread a light monofilament line through it. Because the hollow aluminum arrows were light, I filled them with solder.
To practice, I set up a 3×3-foot cardboard box with a target on the side. The little crossbow was quite accurate. At about 30 feet from the box, I hit the box with the first shot. Off to the woods again to try again.
I shot an arrow, and it went over the engine and through the branches of another tree a few feet away. I hoped it wasn’t stuck. Monofilament line has some stretch in it, and after I tugged on the line, the arrow flipped onto a branch that was holding the engine in the tree. Some more tugs and the engine fell. I could not believe my luck! After spending a few rainiy months in a tree, the O.S. .70 engine was not in bad shape. It turned over but had no compression. I disassembled it, unstuck some valves, cleaned it, and oiled it up. It still runs, as good as ever.
The takeaway of my story? Modelers will always find a way to improvise. Also, don’t make that down-leg turn too far out!
TEXT & PHOTOS BY BRUCE RUMREY 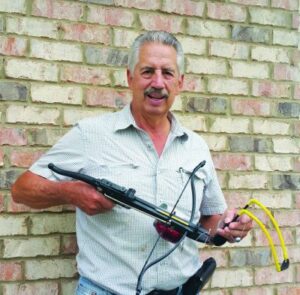