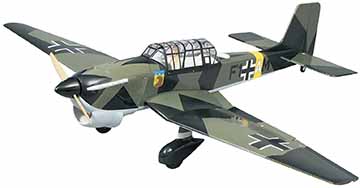 Pilots who missed owning this beautiful warbird before will now have a second chance to buy and fly this great machine! Great Planes is planning a limited re-release of  the Ju-87 Stuka ARFs.

ü  Lots of scale touches, including a fiberglass cowl and wheel pants, “underslung” flaps and ailerons on the gull wing, and a “greenhouse” canopy

The JU-87 Stuka will be available late December