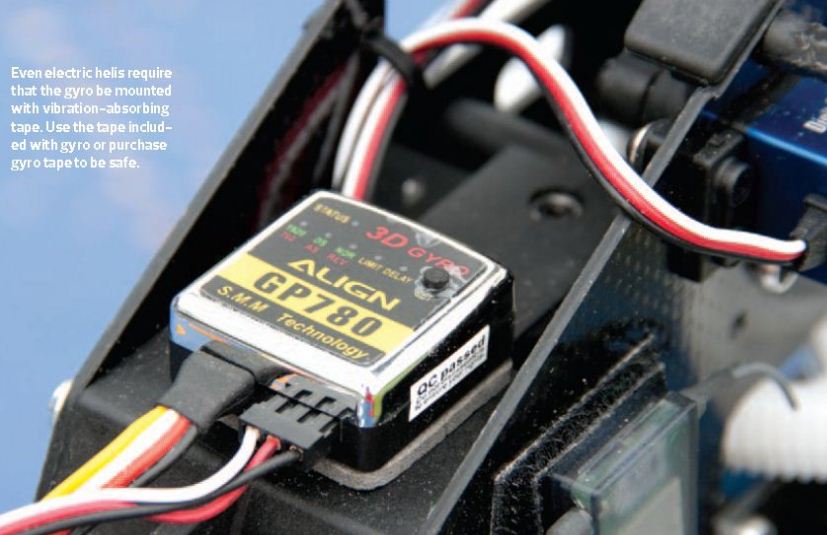 A common way to secure the gyro is with servo-mounting tape a padded tape that has adhesive on both sides. The tape not only keeps the gyro in position, but it also protects it against vibration. The tape will stick well only to clean, dry, smooth surfaces, and it does have two disadvantages:

1. If you have to remove the gyro, you’ll have to cut the tape because it’s difficult to release the extremely strong adhesive. This leaves a sticky residue on both the helicopter and the gyro; you must scrape it off or rub it off with a cloth and lacquer thinner. This could not only mar the gyro, but it could also take some of the paint off the helicopter. To avoid having to do this, coat the bottom of the gyro and the part of the helicopter to which the gyro will be mounted with several strips of 3M Magic Tape the kind that looks invisible when applied. I find this far superior to the regular (shiny) Scotch tape. The servo-mounting tape will stick to the 3M tap e, which can then be peeled off cleanly when necessary, leaving a completely new-looking gyro and helicopter.

2. If the mounting surface isn’t completely clean and dry or the tape itself is rather old, the adhesive might not be strong enough. This can cause the gyro to vibrate loose in flight, and you’ll have some unwanted control inputs and possibly damage your helicopter. To prevent this from happening, I add two or three drops of CA (instant glue) to the tape when I mount it. By doing that, I ensure that it stays in place, and I can still peel it off with the tape.

Your gyro may have a separate on/off switch or sensitivity adjustment switches that are designed to be mounted on the helicopter. Mount these switches away from the engine exhaust and where they’re easily accessible, even when the engine is running.