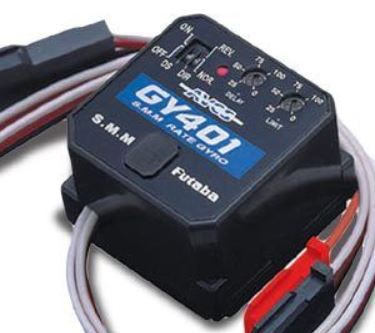 Many low-time heli flyers making the step from Bind-N-Fly micros to larger helis struggle with programming heading hold gyros. The following is a general guide for programming gyros. It’s not intended to address the much more aggressive setups needed for full-on 3D, rather the goal is to program a typical gyro for sport flying.

Because my interests run to sport acro and scale flying, my gyro setups are conservative. I’m not doing high-speed tail first flight, so my goal is reasonable hold and minimal tail kick with rapid collective inputs. That said, here’s my general procedure for programming a typical heading hold gyro:

Some gyros like the ubiquitous Futaba GY401 have separate adjustments for gain and delay, and this is a useful feature. Simply stated, delay sets speed of gyro response, while gain sets amplitude of response. I think this makes setup easier, but with many gyros, you’re limited to adjusting travel and gain. The problem there is that restricting travel to cure tail wag will also limit the piro rate. There are some very inexpensive gyros on the market, but even these days you tend to get what you paid for.