The stall turn (sometimes also referred to as the “hammer-head”) can be broken down into five steps. While this maneuver may seem fairly easy, it can be rather difficult to perform time and time again. Let’s begin! 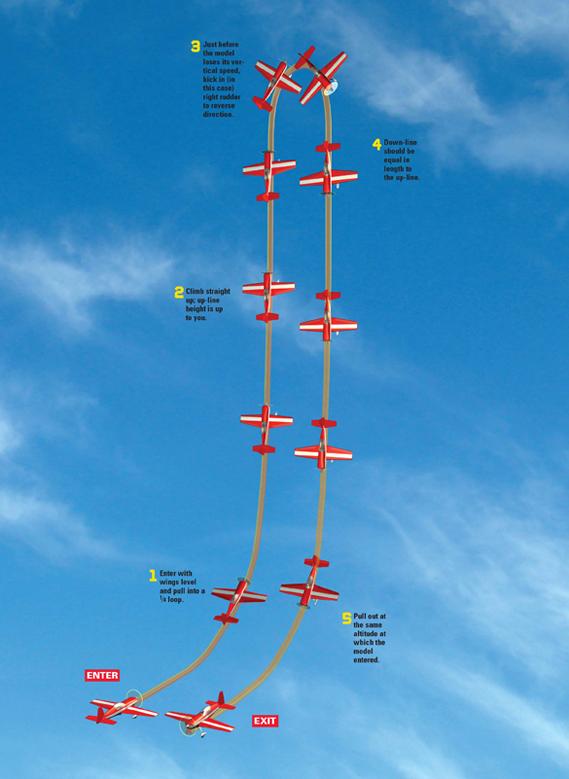 The basic stall turn is performed by pulling the model to a vertical up-line. This 1/4 loop should be fairly gradual in radius and not be abrupt. Once the model is tracking on a perfectly vertical up-line, slowly decrease the power. Then, while traveling vertically and before the airplane comes to a complete stop, add rudder to pivot the aircraft 180 degrees. Now, let the aircraft track on the down-line. Lastly, perform a 1/4 loop to horizontal upright level-flight that matches the same altitude at which the maneuver began. It may be hard to believe, but this maneuver is not as easy to perform as it looks; here’s why:

When performing the traditional stall turn, you must ensure that the aircraft is tracking in a manner that is parallel to the runway and that the model’s wings are level to the horizon. If the wings are not perfectly level and you pull the stick back to perform the quarter loop to establish a vertical up-line, the model will be tilted. You’ll then need to apply rudder input to correct the model’s flight path. If this were a competition, points would be lost. All in all, make sure the wings of the model are level before attempting all aerobatic maneuvers.

EXECUTING THE STALL TURN
As with all new maneuvers, it’s best to perform at a high altitude until you are familiar with each move. In this example, we’ll perform the stall turn from left to right, parallel to the runway.

1 Once you’ve determined that the model is flying parallel to the runway and that the wings are level, increase the throttle to full power and perform a gentle 1/4 loop to a vertical up-line. Please note, however, that attention must be given to the size of this 1/4 loop, as you will have to perform the same radius to exit the maneuver later in step 5.

3 Once the model is about to stop traveling on the vertical up-line, apply full rudder deflection. Tip: It is always best to stall the model (turn the aircraft) into the wind to ensure that the model will not “flop” over the top of the maneuver. Once the airplane pivots about 170 degrees, begin to release some rudder input. When the model pivots a complete 180 degrees, most of the rudder input should be released. Sometimes pilots find it helpful to hold a little rudder input a bit longer so the aircraft will not display the pendulum effect. Depending on the model you’re flying, you may find this helpful and/or required.

4 The length of the vertical down-line should be the same as it was on the vertical up-line. The throttle should remain at idle until the exit radius has been started.

5 To complete this maneuver, perform a gentle 1/4 loop that is the same size as the one performed in step 1. This way, the model will exit in a manner that is parallel to the runway. Remember, the airplane should also exit as the same altitude in which it entered the maneuver. Now you’ll see that the model is traveling in the opposite direction!