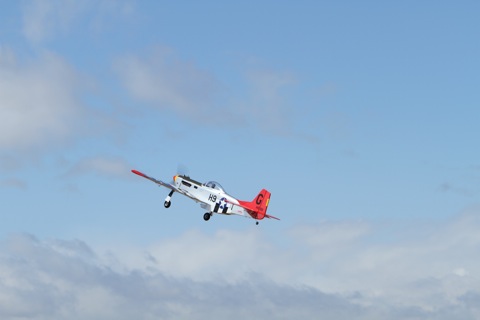 Just the name of the  P-51D Mustang will bring a smile to the face of the fighter pilots who flew them in combat, and an image of the legendary aircraft that saved Europe and brought the War to Germany. Built by North American Aircraft, it first flew in October of 1940. Fitted with six 50-caliber machine guns, it was a most formidable fighter plane. After a few modifications, it was fitted with the Packard-built Merlin V-1650 engine in 1943, and the legend was born. Today you can hardly go to any flying field without someone pulling out this famous airframe.

The folks at Hangar 9 hit this famous warbird dead-on with their P-51D Mustang Sport 40 ARF. Right out of the box, I realized that attention to detail and craftsmanship were outstanding. Packaged in plastic wrap and foam on the control horns to prevent damage while shipping, I unwrapped a beautifully detailed model! From the wings to the fuselage and tail feathers, it seemed to be an easy build. Also included in the package were the fuel tank (already assembled at the factory), a painted pilot figure and canopy, fixed landing gear (more on this later), and the little things you need to make this model airworthy. The assembly instructions were first rate, as I would expect from Hangar 9 after doing a few of their models, and getting this aircraft in the air should be no problem for an experienced modeler. I should mention that this is not a beginner pilot/modeler’s aircraft. It will fly very fast, and the details involved putting this model together involve a lot of thought. Not something a new pilot/modeler needs to think about when just learning how to fly.

The first thing that you will notice is that all the control surfaces are CA glued at the factory. I still gave them a little tug just to make sure. Another plus was that the control horns on the tail feathers were also factory assembled. And in relation to the tail assembly, it doesn’t get much easier. The vertical fin has two threaded rods that go through the fuselage fairing, through the horizontal stabilizer, then through the predrilled holes in the fuselage itself. After attaching the washers and nuts to the rods, just snug them down and you’re done. I think this a great idea because if you need to replace them after a mishap with the ground, it is an easy fix. The wings come complete with the ailerons and flaps already CA glued and control horns added from the factory, another time-saving effort from Hangar 9. The only thing to do here is to epoxy the blocks on the servo doors, install the servos and extension wires, and then attach them into the wing. Installing the fixed landing gear is a simple setup; however, I will be using the Robart spring air system on this model. The assembly instructions provided the necessary information in great detail to use this system. Also provided in the package was the template to make the necessary cutouts for the landing gear in the right spot. You will have to use the 2-¾ inch smaller wheels to get them into the wheel wells. However, if you go this far, you may as well go all the way.

As I will be using the Evolution 60 on this aircraft, I went ahead and attached the metal motor mount using the four screws and some thread-locker to the firewall. For the electric conversion modeler, have no fear, as the hardware and instructions for this application are also provided in the package. As for installing the cowling, this kit comes with a clear plastic dummy cowl, which is a great help in getting the cutouts just right. I would like to add, that the guy who came up with this idea should get a pat on the back. I did not have to add any decals to this model as they were done at the factory, and look good just the way they are! Also the only change/modification I made to this model was to add a third line to the fuel tank, as this makes it easier to fuel and de-fuel while you’re at the field. I also installed the Robart retract system designed for this aircraft and was covered in the assembly instructions in great detail.

Hangar 9 has manufactured some outstanding models over the years, and this P-51D is no exception. With the time-saving efforts they put into these aircraft, I put in just about 6 to 8 hours to complete. From the attention they give to the scale details and of course, the outstanding assembly manual, you can have this model aircraft in the air in no time. As I mentioned earlier, this is not a beginner’s model. However, for the more experienced person who wants a little piece of history to fly, this one is hard to beat. Mine came out fantastic, and I can’t wait to do a few low strafing runs!

Anytime I get to go flying, I usually have a great time just being out there talking to my flying buddies and testing out new planes. When I get to take out a warbird and tear up the sky, it means a little more to me. Such is the case with the Hangar 9 P-51 Mustang Sport 40. On this particular day, the wind was at about 15 to 18mph. Not ideal conditions, however, things worked out great. After doing the range check and making sure all the control surfaces were going the right way, it was time to fly! Pointed into the wind, with the engine going full blast, this aircraft got off the ground in a hurry. After doing a couple of low strafing runs these planes are known for, I could not be happier with the results. When it was time to bring her down, I just pointed it into the wind again and brought it down nice and easy. (I did not even use the flaps due to the windy conditions). In one word, the flight performance of this model aircraft is OUTSTANDING!

It is hard to describe with the windy conditions I encountered that day, the stability of this model. It went right where I wanted it to go, and flew flawlessly.

Although flying conditions made it interesting day, once in the air, I had full control of this model, and was never worried about abrupt contact with the surface of the runway.

This model will do any scale maneuver it was designed for, including loops, rolls, and stall turns. In fact, I did an Immelmann without even thinking about it. And it almost hovered in the windy conditions.

This aircraft presented no problems at all when coming in for the landing. Nice and straight with no stall and not even dropping a wing. Just keep a little power on as
this is a war bird and they do land kind of hot.

I really enjoyed putting this model together and flying it! From the great flying characteristics and ease of building, Hangar 9 did a great job of representing our most famous American warbird that most modelers would love to have in their hangar, and to fly on special occasions. Maybe even warbirds in the California desert?