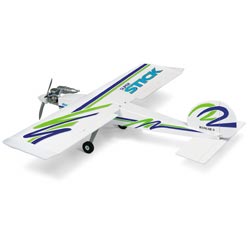 For more than 20 years, Ugly Sticks have been a perennial favorite among sport modelers. Their basic aerobatic abilities and stable flight characteristics make them a natural second or third plane for the intermediate pilot.

Hangar 9 has taken the Ugly Stick concept to the next level. The Super Sticks offer several advantages over previous designs, including more nimble aerobatic performance and a more modern appearance. With their striking dark blue, bright green, silver and white trim scheme, these “Sticks” are anything but ugly!

The Super Sticks offer increased control authority, due to their larger control surfaces. In fact, the aileron and elevator chord (width) has been increased by over 25% for absolutely incredible roll and pitch response. At high speeds with full aileron deflection, the roll rate is almost too fast to count, while the large elevator gives tight 20 foot diameter loops inside or out. In addition, each aileron is driven by its own wing-mounted servo, which not only provides more precise and direct control, but opens up the pilot’s options for flaperons or elevator-to-flap mixing.

The Super Sticks are 90% pre-built ARFs, with a bolt-on wing that gives better security and cleaner looks. For added flexibility, each Super Stick kit comes with all of the hardware necessary to build it as either a tail-dragger, or a tricycle landing gear plane. A universal aluminum engine mount is pre-installed on the firewall, and features a clamp-in design, so no drilling or tapping is required.

For pilots who are ready to move up from a trainer, or sport fliers who want more spirited aerobatic performance in a quick-to-build, high-quality plane, Hangar 9’s Super Sticks are the ideal choice.