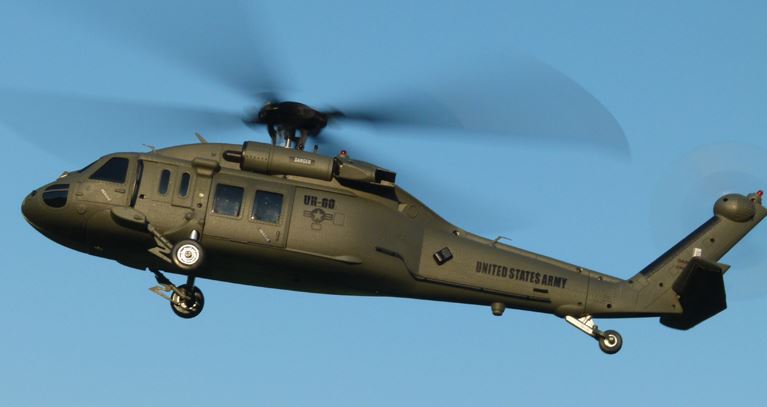 High-quality micro helis are everywhere these days, and with so many on the market, it’s hard to keep up with them all. That said, scale is my first love, so Heli-Max really caught my eye with two highly detailed models in 1/43 scale. The first is a Eurocopter EC145 and the second is an even more eye-catching UH-60 Black Hawk. Both helis are available in ready-to-fly and transmitter-ready versions and include a LiPo flight battery and AC charger so you can be flying in minutes. Both feature scale rotor heads, brushless power, and — best of all! — TAGS (Triple-Axis Gyro System) stabilization, so they fly with the stability of a larger bird.

Because the full-scale Black Hawk is a much larger heli than the EC145, the two models differ in that the Black Hawk’s variable pitch tail rotor is driven by a torque tube, while the Eurocopter’s tail rotor is a motorized fixed-pitch type.

Both models are 1/43 scale, so this side-by-side view shows what a big machine the full-scale Black Hawk is. However, it can fit inside a C-130 for long-range deployments.

I set up both helis with my Futaba 8JH transmitter using the Tactic AnyLink module. This simple-to-use external module allows you to fly a whole range of Tx-R and SLT (Secure Link Technology) models with your existing radio. Setup is practically plug and play, and linking models is a snap. With radio preparations complete, it was time to set up the helis. I would note that both these helis are best suited for pilots who already have some heli time logged. They aren’t difficult to fly, but their detailed bodies are not intended for the bumps and bruises of primary training.

Heli-Max’s UH-60 Black Hawk is a superbly detailed micro heli that looks very realistic in the air. Flybarless stabilization and a torque tube tail provide smooth handling even in a moderate breeze.

The detailed Black Hawk looks more like a high-quality plastic display model than a micro RC heli. The body has full surface detailing, sliding cabin doors, and added details like cable cutters, windshield wipers, and pitot tubes. There are even micro LED nav lights. It almost looks too nice to fly!

Under the detailed body is a well-engineered micro heli. The scale 4-blade rotor head has TAGS flybarless stabilization, the upswept tail is driven by a torque tube, and power is provided by a brushless outrunner motor. The whole installation is tidy and businesslike.

For lower-time pilots, the kit includes oversize low-bounce tires, and there are also spares for detail parts that might get snapped off.

I started out with the manual’s recommended Futaba radio settings. From the initial liftoff, I was immediately impressed with the Black Hawk’s smooth and solid handling.

Literally, the only change I made to the recommended control settings was to adjust the Normal throttle curve so that there wouldn’t be an abrupt change in head speed when I switched in and out of Idle-Up mode. Everything else felt just right with the stock settings.

I’ve logged a couple dozen flights on the Black Hawk so far, and I really enjoy it. The scale appearance is impressive, and it’s just the ticket for backyard evening sorties. It’s a great-handling machine that really looks the part.

The Black Hawk is an ubiquitous workhorse. Optional External Stores Support System (ESSS) wing stubs allow carrying up to 1,360 gallons of fuel in four drop tanks. The UH-60 fills a range of roles outside its original design spec.

The Sikorsky UH-60 Black Hawk has been the U.S. Army’s standard medium-lift utility helicopter for nearly 35 years. Sikorsky tendered its S-70 design in response to the Army’s Utility Tactical Transport Aircraft System program. Intended to provide for a larger, more capable successor to the Huey, the specification called for, among other features, a twin-engine layout, a crew of four, and capacity for 11 combat-ready troops. The catch was that this new larger helicopter had to be capable of air deployment using the C-130 Hercules, and the 130’s space constraints accounted for the Black Hawk’s oddly squatty appearance. The UH-60 entered service in 1979, overcame a series of widely-publicized accidents in the early ’80s, and went on to gain a reputation as one of the toughest and most reliable medium utility helicopters in the world. The basic design has spawned a range of derivatives, including shipboard operations, electronic warfare, specialized night ops, and long-range gunships. A stealthy low-noise version of the Black Hawk was a key asset in the May 2011 raid on Osama bin Laden’s headquarters. In short, the Black Hawk has proved itself as a tough and versatile machine that will serve for decades to come.

The Eurocopter EC145 looks really sharp and can handle mild aerobatics. It does best in calmer weather or indoor flying, but it can handle breezes above 10mph.

The EC145 is built to the same 1/43 scale as the Black Hawk, which results in a significantly smaller model. Like the Black Hawk, the 145 has a scale 4-blade rotor head, but because of its smaller size, it uses a fixed-pitch motorized tail rotor. The removable nose, which provides access to the flight battery and electronics, slides on rails and locks in place with tiny, rare earth magnets.

As with the Black Hawk, I used the manual’s recommended radio settings and takeoff was uneventful. The recommended throttle curve settings worked perfectly, with no significant change in head speed when switching in and out of Idle-Up mode. The 145 is small and light enough that you can hit Throttle Hold at any time, and it will drop uneventfully into the grass.

For a micro-scale model, the Eurocopter is a nice flyer. Even with the detailed injection molded body, it doesn’t fly at all “heavy,” and it looks really sharp. Indoors or out, it’s a fun machine.

The versatile EC145 is particularly suited to search and rescue, and its high service ceiling and modern navigation suite allow operations even in rugged mountain terrain.

The twin-engine EC145 came to life in the late 1990s as a joint venture by Eurocopter and Kawasaki. The design was based on the cockpit of the EC135 and the aft fuselage and tail of the BK-117. This approach sped development and lowered costs considerably. The new utility helicopter was designed with greater cabin space than its forerunners, and the 145 has shown remarkable flexibility in a wide range of roles, including passenger transport, search and rescue, and even armed reconnaissance. With a high tail boom and clamshell rear doors, it’s ideal for emergency medical services and it serves in this role in at least a dozen countries worldwide.