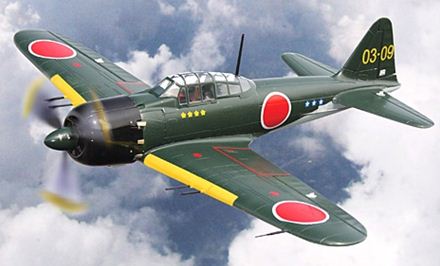 The Model 52 Zero was an attempt by Mitsubishi to update their number one fighter to keep up with the new generation of American fighters like the F6F Hellcat and the F4U Corsair. The A6M5 had a shorter wingspan than the earlier Type 21. Mitsubishi modified the exhaust stacks to exit between the cowl flaps, this increased the maximum speed on the Model 52 significantly.

The new Zero from Hobby Lobby International is all-molded from tough EPO foam and comes pre-painted, decorated and clear coated with a matt finish. Our model faithfully represents this classic fighter right down to the 2-20mm cannons and 2-13mm machine guns on the wings; it even has the Pitot tube on the port wing tip.

The sturdy mechanical retracts come pre-installed in the wings and pre-connected to the retract servo. The gear legs have scale gear doors attached; tail wheel is steerable with rudder input. The outrunner brushless motor (800Kv) has plenty of power to spin the scale 3-bladed prop; the 30A ESC is mounted in the cowl for optimum cooling. A 3-cell 1650mAh Lipo battery is included for flight times of 8 minutes or more. Battery access is under the canopy that is held in place with magnets making battery changes quick and easy.

We offer this airplane as a receiver-ready model and recommend the use of a computer radio so that the control throws can be set per the illustrated instructions. With these settings the airplane is a terrific performer and exhibits the precision and feel of a pattern plane with the scale looks of a fighter. Requires a 5-channel radio system (computer type recommended,) and a Lipo battery charger.