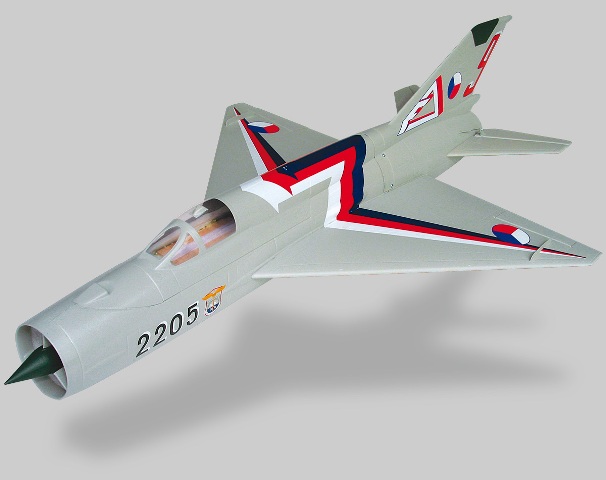 The Mig-21, famous as “Fishbed” (its NATO codename), was the first successful Soviet-type jet combining fighter and interceptor characteristics in one airframe. It was a lightweight fighter, achieving Mach 2 with a relatively low-powered afterburning turbojet. Three generations were in production in the Soviet Union from 1958 to 1986 with more than 10,000 Mig-21s of all versions produced. Further machines were built in Czechoslovakia, China, and India.

22-1/4″ wingspan, 33-7/8″ long, 186 sq. in. wing area, 17-1/2 oz. flying weight. The jet is molded entirely from polystyrene foam and completely pre-painted, ready for assembly. Complete instructions are provided along with an exploded view drawing of the jet. The assembly is not difficult but prior building experience is recommended. Assembly will take 4-6 hours depending on choice of glues. Waterslide decals for 6 different combat aircraft are included. A wide selection of motors can be installed in the included Alfa 60/15 Mark II ducted fan unit. All aerobatic maneuvers are possible with the exception of those requiring a rudder. The jet is designed for hand launching and belly landing. The bottom of the fuselage has a plastic shell reinforcement to reduce wear. The landing speed is very slow when built to the recommended weight. Three micro servos are required, two for ailerons and one for elevator.