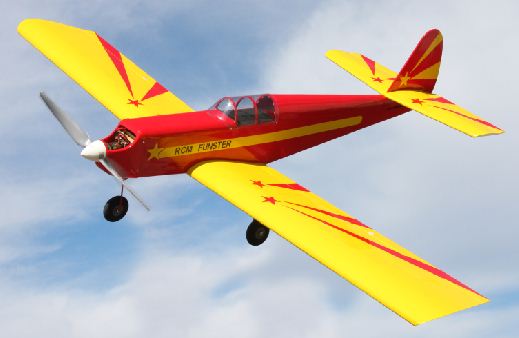 Do you remember the RCM Funster!

Well, the folks at Hobby Lobby have come out with a new V2 version of their ARF. This great second plane is just like a Telemaster .40, but with a low wing and tricycle landing gear. This great “old time” sport design was originally offered as a balsa kit but now is laser cut and pre-built. Whether you power the Funster with an electric motor or a glow engine it is an exciting all-out blast from the past and you’ll be doing touch and goes all day long with the flaps down.

It’s easy to transport with a 2-piece wing. The control surfaces are pre-cut and slotted, but not glued in. The flaps are driven from a single servo mounted in one wing panel and the ailerons are driven by separate servos.

The package incudes a motor mount for a .40  to .46 size equivalent outrunner motor. A hatch on top of the fuselage provides easy access to the battery tray or fuel tank.

Assembly takes only about 6 to 8 hours. Requires a 5-Channel radio with: Ailerons (2 servos), Flaps, Elevator, Rudder/Nose Gear, and Throttle. If built with a glow engine, one additional servo is required for throttle.