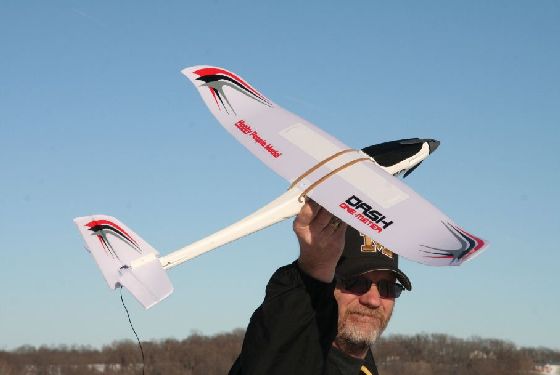 The one-meter Dash available from Hobby People is a durable powered glider, perfect for the AMA Park Pilot Program.  Constructed using an injection molded plastic fuselage, a one-piece covered foam under-chambered reinforced wing, bolt-on tail and powered by a brushed direct drive motor, the Dash is all about flying fun across a wide range of speeds.  Designed for beginners through advanced flyers, the three channel setup employing rudder, elevator and throttle is controlled through a 27MHz transmitter.  The Dash is an RTF hybrid in that installing the bolt-on tail and placing the wing with rubber bands makes for a quick build, but also a very portable plane.  In fact, you can remove the wing and place the plane, transmitter, 1000 mAh 7.4V LiPo battery, included 12V LiPo charger, extra prop and spinner in a plastic bag and easily carry it to the park.

Instructions for assembly are sequential with both photographs and text to guide anyone successfully through the build.  The level of detail is excellent and leans toward the beginner.  Content includes safety warnings, transmitter familiarity, and basic operation and flying, but also ranges into professional tips, transmitter stick adjustments, troubleshooting and a unique addition providing content on repairs.  Hobby People take pride in having replacement parts for all their products.  The Dash has a comprehensive list of parts so even the most disastrous crash can be quickly rebuilt to get you back into the air.

From the minute you open the box, you realize quality engineering.  The Dash is designed to fly simply by installing the tail, wing and battery.  My experience had the powered glider dead-on with the 1.75” (44mm) center of gravity.  There is little room to do much but slide the battery between the receiver and the ESC.  Forward and aft movement of the battery is completely limited and the fit between the electronics is tight.

I would guess we have all become accustomed to brushless motors, but let’s not forget the consistent and powerful performance of the high speed brushed 400 motor.  This choice provides an excellent climb rate, plenty of power and speed, but more importantly it gets the weight up front needed to accommodate the short forward moment of the Dash fuselage. To compensate for what might be considered a bulker, heavier motor the design utilizes a lightweight 7.4V LiPo battery, ultra light receiver and a brushed 10 amp amp ESC capable of handling 6.0V to 8.4V inputs.

Nine-gram servos are installed and provide plenty of torque for the rudder and elevator.  Each of those control surfaces are molded into the foam and covered so their strength is outstanding.  A few rotations back and forth before installing the control linkage will ensure you are not putting too much of an initial bind on the servos.

The wing is one-piece at 39.4” (1M) and uses a thick reinforcement stick over the top of the wing secured by white tape.  The tape is tenacious and sticks very well leaving no doubt a high speed pull out is not going to create a wing failure. The wing is fully covered and decaled.  The tail uses a two-bolt method to secure it to the fuselage.  The control horns line up perfectly with the control linkages and do not require attachment before installing the tail.  This really simplifies the removal and installation if you want to pack the Dash back into the box for storage or portability. High quality snap clevis are adjustable and complete the tail installation after you slip the vertical stabilizer and rudder down through the horizontal stabilizer and elevator to make the attachment to the fuselage.

For just $99 you get a heck of a well built, powered glider, with a lot of quality design and components.

This is basically a no build powered glider designed for having fun.  It is durable, and in the event you do actually tear something up, it is fully repairable with a full complement of available parts.  The price is right at $99 with transmitter, LiPo battery, and 12V LiPo charger.  Portability brings the Dash to the top in the one-meter value class and it will not disappoint you in the air.  The Dash has all the necessary AMA Park Pilot character and is a grab-and-go model you can take and fly just about anywhere.

The Dash one-meter is a hand launched aircraft.  Plenty of power is available and the climb out is straight and true.  The 6 x 4 folding prop and brushed 400 motor produce a low amount of torque so there is no need to compensate or react to anything unusual on the launch.  Because the Dash is short at just over two-feet, it is slightly pitch sensitive.  The chambered wings produce plenty of lift so head wind penetration requires some thumb movement to basically keep the nose down.

The swept up wing tips are notable and they combine with the under-chambered wing to allow the Dash to react a little differently in cross-wind turns.  Turns with the wind over the top of the wing can be slow, but turns downwind once the wind catches the underside of the wing can be pretty quick.  Keep in mind the Dash uses the rudder to execute the turns and even in winds of 12 – 15 MPH, I was able to control the Dash and make turns.  Again the wind does influence the turning speed so at times in higher winds there was a delay in the turn especially as I turned into the wind.

Overall, I would not hesitate to fly the Dash in winds of up to 12 – 15MPH.  Wind penetration is good with some buffeting.  On a calmer day these characteristics are non-existent, but wind should not limit your flying time. In fact, I believe you will actually have a broader flight envelope in some wind.  The Dash sustains the glide better, reaches some incredible speeds and climbs with authority into the wind.

Flight times are ten minutes plus.  I did not think the Dash is a long duration soaring plane, as the design is not specific to that mode of flight.   As well, it is not a hot-liner capable of ridiculous speeds simply because it does not weight enough.  With a little wind and a steady climb rate, getting to 500 feet is nothing.  Weather in the Midwest during this review was cold so the density altitude was pretty tight.  I would guess those hot summer days ahead are where the power and lift combination start to shine; plenty of both for some great flights.

Across the flight envelope you have good stability and even though this is a three channel setup, I did not see or experience any quick stalls or unpredictable behavior.  I put the Dash through power-on and power-off stalls and watched as in both cases the nose just dropped straight forward.  Landings were always solid even though my head winds created some buffeting.  I would add that I felt more comfortable with some power on as I approached the end of the runway because the glide is short.  Wing loading is 34.53g/sq.dm. (11.3 oz/sq. ft.) so it is at the higher end of the glider range.  This is evidenced on approaches where the Dash was ready to quit flying and glide to the ground, but again great for park flying.  I experienced no stall tendencies on approach.

>Stability – The wing design enhances the stability and even in higher winds the Dash is stable.

>Tracking – Some wind will catch the underside of the wings, but controllability through the rudder and elevator is solid.

>Aerobatics – Basic loops and inverted flight are no problem.  Rolls take some time to get the Dash over on its back.

>Glide and stall performance – Consistent and predictable glide slope with little in the way of stalls.

The dash is a fun park flyer capable of quick altitudes, aerobatic maneuvers and excellent flight durations.  It is very portable and can be flow in just about any open space. The Dash is a plane you will want to keep with you so you can fly whenever possible.