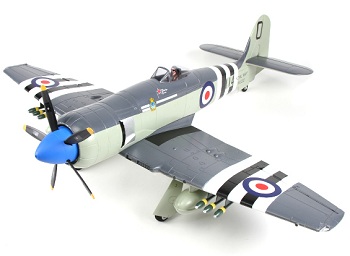 The Hawker Sea Fury was the last propeller-driven fighter to serve with the Royal Navy and also one of the fastest, production single piston-engine aircraft ever built. Developed during the Second World War, the Sea Fury entered service two years after the war ended and proved to be a popular aircraft with a number of overseas militaries, also seeing service during the Korean War in the early 1950s.

The Sea Fury has many design similarities to Hawker’s earlier Tempest fighter, though considerably lighter. Sea Furies were fitted with the powerful Bristol Centaurus engine, and armed with four wing-mounted Hispano V cannons. While originally developed as a pure aerial fighter aircraft, the Sea Fury FB 11 developed into a fighter-bomber, and was quite suitable for the task.

The Sea Fury was used by the British until the mid 1950s as well as many other nations until the late 1950s. Since that time many airframes have survived through the efforts of private owners and have enjoyed a long post military career at air shows, with heavily modified versions participating in the annual Reno Air Races in the Unlimited Class.

Avios brings you an exemplary example of the legendary Hawker Sea Fury in the form of a brilliant no-glue design which arrives with all electronics pre-installed, just needing a battery and radio system to complete. The Avios Sea Fury is the FB11 version modeled in the livery of Commander Peter “Hoagy” Carmichael, the only British pilot in a piston engine aircraft to down a jet driven airplane during the Korean War.

The all EPO molded foam replica features functional split flaps, retracts with gear doors and sequencer, LED lights, scale 5-blade propeller, wing mounted rockets, and remotely activated drop tanks. Included in the box is a 5-blade spinner, for the utmost in scale realism as well as the 4-blade version which allows you to run standard sport propellers for optimal performance.

The Avios brand is focused on premium quality design features, with no detail being spared. The Avios 1200mm Hawker Sea Fury is no exception.