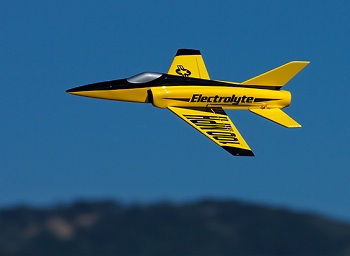 Do you feel the need for speed? The HobbyKing™ Electrolyte mini jet will fill that need quite well. Originally developed by US designer Dr. Bret Becker and sold as a limited production kit, it is now available as an almost ready to fly version, saving you time and effort. Working closely with the designer on both the airframe and power system, the Electrolyte you see here is one of the fastest micro jet’s around. The original prototype was the first micro EDF to exceed 100mph and is currently on display at the AMA Museum in Muncie Indiana.

The Electrolyte features a beautiful pre-painted fiberglass fuselage, with balsa wings and tail. Included in the box are two different vertical fin options. As this is a high performance jet, it needs to get into the air quickly, so we have even included a mini bungee launch kit in the box. The heart of the Electrolyte is the included aluminum shroud, 8 blade impeller, Dr. MadThrust 40mm EDF unit with 8000kv inrunner motor. This is the power system developed by Dr. Becker specifically for this model to give the best performance without excess current draw.

Building the Electrolyte will take a few evenings of work. Though it is an Almost Ready to Fly model, we do suggest some previous model building. You will need a few tools such as a rotary tool with assorted bits, various drill bits, epoxy, clear tape, CA glue, sand paper, hobby knife, scissors, and some patience.

Flying the Electrolyte is the real treat. We recommend using the included bungee kit for best launches. From there, its full throttle the whole way! High speed passes, point rolls on the deck, either way, its an adrenaline ride the whole time. Check out the HobbyKing™ Electrolyte 40mm EDF, a small model that is big fun!