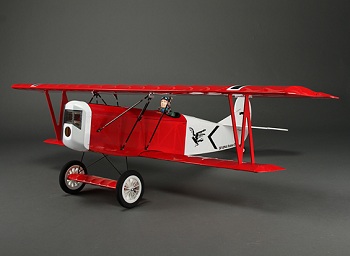 The full size Fokker D.VII was a front line German fighter that entered operational service late during World War I. It differed greatly in design function using a cantelevered wing, which required no external flying or landing wires. The wings being of much thicker design than many of the biplanes of the day. It featured a much tamer stall than the Albatros, Sopwiths, and others of the time, making it a much higher performance airplane that was a formidable opponant. Built by three different factories during the war, it was used after the Armistice by other countries in ground attack roles, and examples went to the US, France, England and others for use as evaluation airplanes. It was highly manueverable, well armed, and had a reliable engine, making it one of the best fighters of the first World War!

Our Fokker D.VII is built up from light weight balsa and plywood and covered in strong, yet light weight plastic film covering. Arriving almost ready to fly, you just need to complete final assembly, then install your choice of electronics and battery. Since it is a biplane, setup is critical, so included in the box are some laser cut plywood setup jigs. The cabane struts feature threaded ball ends that are adjustable allowing you to easily perfect the setup of the model.

Access the battery, motor, and other electronics through the large removable hatch on the fuselage top. Scale details like a formed plastic engine and dummy machine guns round out the model, making this a fun, sport scale airplane.