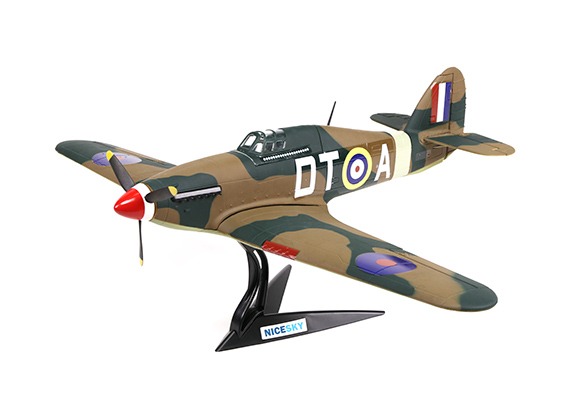 Designed by Sir Sydney Camm and first entering service in 1937, the Hawker Hurricane formed one half of the legendary partnership that was the backbone of the Royal Air Force during the Battle of Britain. The Hurricane chalked up an impressive 656 German aircraft shot down during the battle compared to its more glamourous stablemate, the Supermarine Spitfire that accounted for 529.

Although slightly slower and with a lower rate of climb than the Spitfire, the Hurricane was a highly manoeuvrable and stable gun platform and proved to be adaptable to any task required of it, serving in every major theatre of war from 1939-45 and was adapted for carrier operations and night-fighting.

This 700mm wingspan replica is finished in the colors of the Hurricane flown by the CO of 257 Sqn, Sqn. Ldr. Robert ‘Bob’ Stanford-Tuck DFC DSO from RAF Coltishall in Norfolk UK during 1940-1941.

Such is the scale detail on this great little model that it comes complete with its own desktop display stand for showing-off when you’re not flying it.

The model has full 4 channel control on ailerons, elevator, rudder and throttle; a scale 3-bladed propeller, exhaust stacks, antenna mast and cockpit detail, together with a scale pilot figure.
The surface detail underneath the dark earth/green camouflage enhances the already fine looks of this iconic fighter.

For simplicity and weight saving the Hurricane has no undercarriage fitted, providing a perfect solution to the need for a quick scramble in the local park!

The plug and fly format of this model only requires a few minutes of assembly time, even a screwdriver and velcro are included!

All you will require to have this Hurricane in the air is a 2S 650~850mAh 20C LiPoly battery and your own transmitter and receiver.

Join the many paying tribute to “The Few” with this fantastic scale model of the legend that is the Hawker Hurricane!