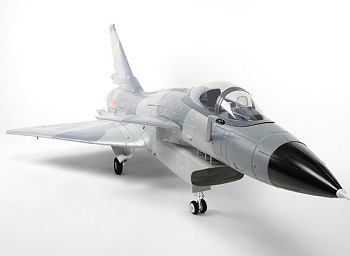 The J-10 is a multirole fighter aircraft designed and produced for the People’s Liberation Army Air Force (PLAAF). Known in the West as the “Vigorous Dragon”, the J-10 is a multi-role combat aircraft capable of all-weather operation.

The program was authorized by Deng Xiaoping in the mid 1980’s to develop a indigenous aircraft. Work on Project #10 started several years later in January 1988, as a response to the Mikoyan MiG-29 and Sukhoi Su-27 as introduced by the USSR. Development went to the Chengdu Aircraft Design Institute with Song Wencong as the chief designer, due to his experience previously with the Chengdu J-7III. The aircraft was initially designed as a specialized fighter, but later became a multirole aircraft capable of both air to air combat and ground attack missions.

The J-10 was officially unveiled by the Chinese government in January 2007, when photographs were published by Xinhua News Agency. The prototype “J-10 01” was rolled out in November 1997 and first flown on 23 March 1998 in a twenty-minute flight.

Since that time J-10 fighters have been deployed to PLAAF regiments, as well as their August 1st Aerobatic Demonstration Team. Additionally a modified version of the J-10B has been exported to Pakistan.

The HobbyKing™ J-10 fighter is a plug and fly EPO foam scale representation of the full size fighter plane. Also developed and manufactured in China for the EDF hobby enthusiast, this model is here to please. This model features some nice details that set it apart from other foamie EDF models.

Full metal retracts with working oleos, LED navigational lights, and molded scale details are just the start. The two piece plug in wings have integrated PCB connectors at the wing root that automatically plug in flaps, ailerons, retracts and LED lights just simply by attaching the wing. No fiddling with tight connections. The model is a all bolt together design, requiring no glue for assembly.

The large delta wing configuration gives the J-10 a low wing loading compared to some EDF models, and can even be dragged around in a high alpha configuration, as well as making great short field landings. A built in electronic mixer handles the elevon and canard function. Plus, a landing feature that when activated gives full up on the full down on the flaps/elevons to really slow the model down upon touching down. We’ve set this model up with a powerful 8S motor and 105mm EDF which with mixed throttle usage can achieve flight times in excess of 5 minutes. To handle all that power, the 120amp brushless controller has heavy duty leads and pre-installed XT150 connectors. A spare set of battery side connectors is even included in the box!

If you’re looking to add something different, yet strangely familiar to your hanger, check out the HobbyKing™ J-10 Vigorous Dragon.