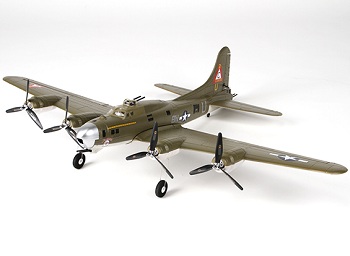 With a 29-inch wingspan, this baby bomber is everything we dreamed about when we were building static models as kids: a multi-engine model that can actually fly! This one comes ready to bind to your compatible radio, so you’ll be flying missions in no time. Here’s the full press release from Hobby King:

The Boeing B-17 Flying Fortress is one of the most iconic aircraft of the second World War. It was used by the US Army Air Corp for strategic bombing of targets in Europe. Made most famous by the 8th Air Force, it fought along side Britain’s Bomber Command from bases in England, while the 15th Air Force flew out of bases in Italy. It cold fly higher than any other Allied bombers of the time, and in the end dropped more bombs than any other Allied bomber. The B-17 could fly long missions, and was noted as being able to fly, even after being severely damaged. Routinely they were documented as returning from missions with large sections of their tail missing, engines shot out, or other major damage. They have been popularized in Hollywood movies like “Memphis Belle” with multiple B-17’s remaining airworthy today.

The HobbyKing Mini B-17 re-creates this famous bomber with a sport scale outline. Molded entirely of EPO foam, something typically not seen in micro models. This makes our Mini B-17 quite durable, with the smooth surface finish, much more realistic looking than other EPS foam micros on the market. Integrated into our Mini B-17 is a DSM2 receiver that features integrated flight stabilization. When using a 5+ channel transmitter, you can choose to turn the stabilization On or Off while in flight. If using a simple 4 channel transmitter, the flight stabilization defaults to the On position. Removable plug-in landing gear lets you choose between taking off from the ground, or simply hand launching the model. Accessing the battery is quick and easy through the removable nose dome.

Flying the Mini B-17 is a real treat. Even in breezier conditions it handles quite well with, and without stabilization turned on. The light weight, and ample power on tap means you can fly at low throttle settings, getting long flight times. With differential thrust on the counter rotating propellers, smooth, scale turns and easy ground handling make this one sweet little mini plane.