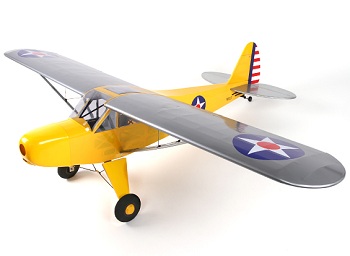 The Piper J-3 Cub is one of the most recognized light airplanes in the world. It was built in large numbers and was a favorite due to its simplicity, ruggedness, affordability, and easy handling. The large wing enabled it to fly slow. It has worn both civilian and military clothing in its long history including acting as a trainer and spotter aircraft during WWII.

Our J-3 Cub is an almost ready to fly model that can accept both electric and glow power options. The all wood balsa airframe comes pre-built, and covered in bright yellow and silver covering of the USA Army training regiment. A complete hardware package including wheels, struts, and fiberglass cowl completes this model. Though it has a large wing, it is a two piece plug-in type which makes transportation a breeze.