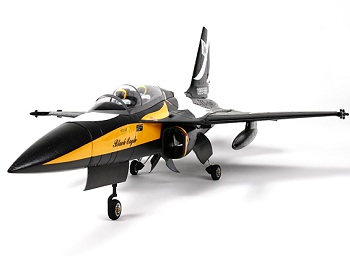 It’s a great time to be a jet jock! We’re loving this T-50 Golden Eagle electric jet, which has retracts, a canopy that opens and closes and comes with a motor and speed control installed. Here’s the full release from Hobby King: The KAI T-50 Golden Eagle is an advance supersonic trainer that was developed jointly between Korea Aerospace Industries and Lockheed Martin. It is the first indiginous trainer design to South Korea, as well as having supersonic capabilities. Development began in the late 1990’s, with it entering active service with the Republic of Korea Air Force in 2005. In addition to being a trainer, it has been ordered by other countries for use as a light attack aircraft and is even being considered for use by the United States Air Force as their next generation of training aircraft. Design consideration for the T-50 was taken from the F-16 Fighting Falcon, including: use of a single engine, speed, size, cost, and the range of weapons. KAI’s previous engineering experience in license-producing the KF-16 was a starting point for the development of the T-50.

Our T-50 Golden Eagle also uses a single electric ducted fan unit, though the airframe is composed entirely of EPO foam. A host of nice features include a remotely operated canopy that opens and closes from your transmitter, plus working retracts with gear doors. Assembly is quite quick, just glue the wing panes and tail sections in place, hook up the control rods, and program your radio. A pre-installed 5 blade, 70mm ducted fan provides almost a 1:1 thrust to weight ratio, giving excellent performance and handling.

The T-50 offers you a scale model, with nice details at an affordable price while being something a little different…yet strangely familiar.