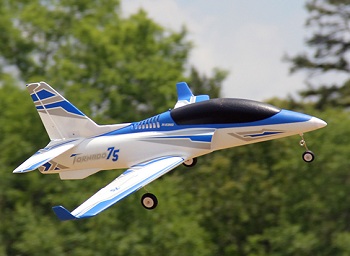 The Tornado 75 takes plug and fly EDF’s to a whole new level, creating a robust airframe that suits all levels of pilot. The Tornado 75 literally flies like it is on rails, wherever you point it, it will go. Couple this with a wide flight envelope, this model will suit a first time EDF pilot, yet at the same time keep a smile on the face of the most experienced turbine pilot.

The design is simple and fast to assemble. No glue! The moulded EPO airframe ingeniously clips and screws together, and with plugin wings will have you up and flying within a matter of minutes. The Tornado 75 features a large clip in canopy offering easy access to your radio gear and battery. Although the Tornado is supplied with fixed landing gear, optimal performance is obtained by hand launching, as the model can be gracefully belly landed on any grass runway.

Coupled with the 60A ESC, the 3060 – 2000KV motor and fan unit makes light work of throttling this performance model through the air. Inverted, knife-edge, split S, snaps and rolls, the Tornado 75 works easily through these precision aerobatic manoeuvres; and best of all, unlike most EDF’s that have flight times of 5 minutes or less, the Tornado’s unique aerodynamics allow for flight times of 10 minutes plus. This does not necessarily mean you’ll need less batteries, because the Tornado is so addictive, you’ll want to fly it all day long.