HobbyZone is featuring this outstanding no-skill-needed, beginner’s level Super Cub aircraft, which is equipped with the new ACT (anti-crash technology) software. This anti-crash software is designed to monitor the ground and sky and keep the aircraft from entering into an unusual attitude such as extreme climb or descent, which can lead to a premature end to the flight. This version of the Super Cub is comprised of a durable Z-foam material, ideally suited for resisting damage due to the occasional beginner mishaps that occur from time to time.

This Super Cub comes detailed with the stick & peel blue decal markings on both the fuselage and the top and bottom of the wings, which makes it visible and easy to see. The aircraft fuselage and its components, such as the wing, rudder and elevator, are secured within the preformed, molded Styrofoam packaging, while the hardware is individually packaged in marked plastic to ensure a systematic and proper assembly.

This Super Cub is equipped with an electric motor geared 480 brushed motor already installed within the fuselage along with the propeller and spinner attached and connected to the ESC, eliminating lengthy set up time. HobbyZone also includes an additional propeller and a small Philips screwdriver to finish off the final assembly of the aircraft. This little beauty can be set up at the field in less than half the time it takes to fully charge the battery—a couple of minutes and its ready for flight. When you’re ready to take the plunge into the wonderful world of radio control model aviation with an all- inclusive package, you’ll find the HobbyZone Super Cub to be an outstanding introductory aircraft.

The HobbyZone Super Cub incorporates compressed hinging for the elevator and rudder control surfaces within the pre-fabrication molding process and the control linkage hardware in place.

Also included in this kit are a 3-cell, 11.1V 1300mAh LiPo battery pack and a LiPo charger along with the car adapter charger, which is specifically intended for the provided battery.

This kit also features a very nice step-by-step installation guide with written descriptions and pictorial illustrations, making it virtually impossible to make a mistake. HobbyZone also includes the transmitter, a fresh package of eight AA batteries and a Super Cub learn-to-fly DVD to help guide you along your way to becoming a competent RC pilot and aviation enthusiast.

The Super Cub comes with a preformed bent metal landing gear and foam wheels already installed along with the steerable tailwheel—all it takes is a little squeeze to snap in place and secure the trim pants with a couple of screws. The wing is held in place with a couple of rubber bands and two screws for the wing struts.

The benefits of an RTF (ready-to-fly) aircraft are to get you to the field and fly! This model was right out of the box and into the air in less than half an hour, which makes it a great choice for spending less time building and more time flying.

One of the most popular aircraft for flying off water is the Super Cub and HobbyZone has a very nice optional accessory you can add to this plane. With the Super Cub floats, you can take it anywhere and fly off the water. The float kit comes with:

Be sure to change the propeller to the 10×8 supplied with the kit for flying in the seaplane mode (with floats).

The optional floats are complete and simple to install. Set the right and left float with the two separators between them and the larger fuselage bracket in front and the smaller one in the back. Insert the eight-3×10 millimeter Philips screws in place and tighten them down and the floats are done and ready to install to the fuselage. There is a front and rear bracket underneath the fuselage. Simply press into place and lock the rear bracket with two landing gear straps and the four screws that are provided in the kit and you’re done—ready to tackle the open waters!

HobbyZone has also equipped the Super Cub with an accessory port on the fuselage to accommodate an aerial bomb module for those exciting competitive extras.

From the box to the sky, in less time than it takes to charge the battery, I had the plane unpacked and fully assembled, ready to connect the battery and check the operation of the radio gear and set all the trims to neutral ready for its initial flight. The simplicity of this model is in a word, uncompromising, as the HobbyZone Super Cub is a quick and simple, easy-to-understand aircraft that anyone can follow and enjoy flying.

The Super Cub is best suited for flying off a paved lot or RC flying field with short grass.  Being a park flyer, it’s also quite simple to hand launch in a park or open field recreational area. When taking off, be sure to add full power while holding a little up-elevator and be mindful of the wings; keep them horizontal and level as possible during takeoff. This Super Cub has more than enough power for takeoff from a grass runway. The climbout is strong and deliberate and this aircraft flies exceptionally well, even in a light to moderate wind. Once I achieved the altitude I planned to fly at, I made a couple of minor trim adjustments, which allowed me to maintain straight and level flight.

When entering into a turn, I find I have to hold a little bit of up-elevator during the turn as it has a slight tendency to pitch down and a bit of down-elevator when correcting into straight and level flight; a simple reduction of power at this point helps it to maintain altitude during these turning maneuvers as well. As your flying progresses, you’ll find that this is a common characteristic of most aircraft and soon get used to it.  This is a very stable flyer; easy to control and very predictable, which is essential for first-stage pilots.

I wanted to see just how far I could go with it and surprisingly, I did some very impressive aerobatic maneuvers. One of my favorites is the stall turn and after doing about a dozen or so, I decided to get back to the business of cub flying and practiced some slow flight, down to about 1/4 throttle. It just hung there flying very scale-like, and I wanted the wind to pick up a bit more as with all cubs, they love to fly slow and tether into the wind.

During slow flight, I continued to reduce power and slowly increase the pitch of the plane to induce a stall. Just as I had anticipated, the nose dropped gently and immediately re-established a straight-and-level flight attitude by adding a little bit of power during the stall recovery. Before the battery started to weaken, I made a number of slow flybys to get my orientation to the runway for landing. After three or four approaches to the field, I made my final approach for the landing and just as I expected, it was nice, slow and stable and I held it slightly nose up as it settled onto the runway to a perfect landing.

HobbyZone also offers the Super Cub floats to convert the aircraft for seaplane operation. Once I installed the floats, we were off to the lake for a little water action. I had to
change the propeller, which came with the floats; it’s the next size up and gives the plane a bit more low-end power for getting off the water. At the water’s edge, I gave it full power and it was off and running straight and true for 50 to 60 feet or so while holding a little up-elevator and it took off just like the real thing. It flew just a bit slower, but definitely had more of the low-end power—that was very evident. I flew very scale-like and seemed to be even more stable with the floats on it while maintaining the same great flight characteristics and modest aerobatic capability. The Super Cub is known for its slow flight stability and the floats didn’t hinder its abilities in the least; in fact, it enhanced the overall appeal and performance of the plane. Landing couldn’t be easier, it glides extremely well and lands smooth and predictably with or without power.

The HobbyZone Super Cub has lived up to its reputation as a gentle and predictable aircraft along with its enhanced forgiving nature due to the new ACT technology for the first-time nervous flier. Cubs are, and will remain, one of the most enjoyable classics of all time.

I also set up the Super Cub with the HobbyZone floats and brought it over to the water for a little practice taking off and landing to see how much different it would be. Once I changed over to the float array, I was ready to give it a try. 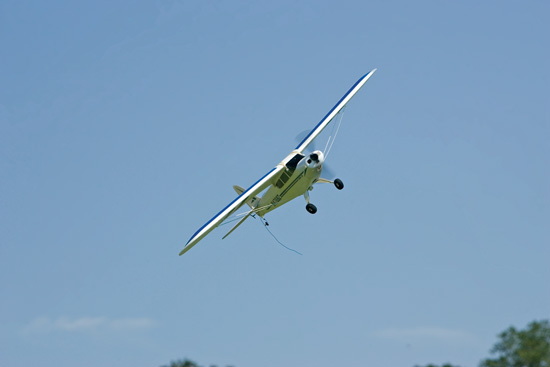 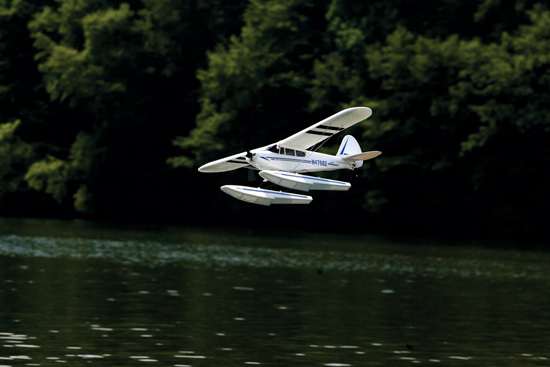 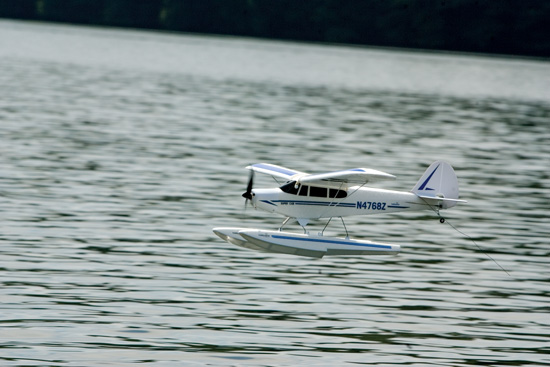