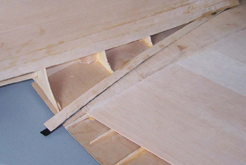 Instead of adding the fillet after the wing and fuselage are built, I make the shape of the fillet areas as part of the fuselage formers themselves. This requires having at least the wing center section built and attached to the fuselage, but to make sure the wing is properly aligned with the fuselage, I build the entire wing and measure from the wingtips to the tail.

The fillets start with a 1/32-inch plywood saddle that forms the top-view outline of the fillets. This is placed between the formers and the wing, and then it is glued to the formers, making a perfect fit. Then I epoxy some carbon fiber roving just inside the outer edges and laminate it between the plywood and the first strip of balsa planking. This produces a very strong and ding-resistant outline that can be sanded to a very fine edge. Once the epoxy cures, I start planking the fairing section with 1/4-inch-wide strips of 1/16-inch-thick balsa, alternating the strips as I go–one along the wing and then along the fuselage. Fit each strip into place to make the seams and joints tight. Use a rounded sanding block to smooth the planking, and then fill any gaps or seams with a hobby filler. Once they are sanded smooth, cover the fillet area with fiberglass cloth and resin while you are finishing the fuselage.¶ 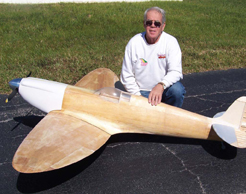 Nick Ziroli poses with his Spitfire. Wing fillets are an important part of its scale look.