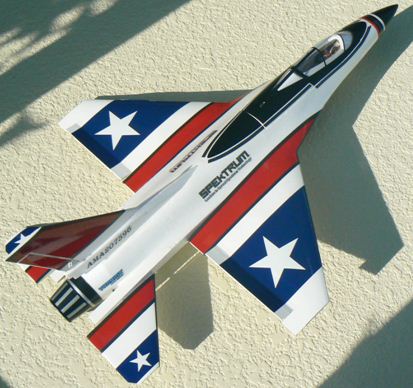 Several years ago a flying buddy brought a Phase 3 F-16 out to the flying field. It was the first EDF jet I ever saw fly, not counting Bob Violett’s Electra which had made quite an impression on everyone at Florida Jets earlier that year. This F-16 is a really nice flying, hand-launched foam model. It uses a two-servo stabilator setup for control, flies very well on an 1800-2200 Lipo, and is quick but not too fast for an intermediate flier. The kit features the motor, matched ESC, and a 70mm fan unit assembled and ready to install. It has a complete decal set, great instructions, and is literally the perfect platform for the first time EDF pilot. The plane has a very wide speed range and can be landed very slowly, especially in a breeze. I’ve seen the kit priced from $70 to $130 and everywhere in between from local hobby shops and from Hobby People in California. I still have my first one and also two others because they fly so well and look so good. This article presents my adventure in creating a “full house” F-16.

The first thing I wanted to do was upgrade the motor and fan to a four-cell unit. I thought the great flight characteristics the plane already had could be retained even though a larger motor and battery would bring a weight penalty. Maybe a little faster landing would be one result, but faster flying would be the bonus offset. I was right on both counts. The plane is at least 30% faster than stock, and it still lands very gently and can be “dragged” quite far on landing to bleed off speed.

I used a Hobby King 2800KV motor rated at 550 watts and 42 ounces of thrust, and a six-bladed fan unit which only took slight modifications to fit perfectly in the plane. Since the stock version weighs 20 ounces, 42 ounces of thrust sounded about right. I mated the motor and fan to a Turnigy 55AMP “Trust” ESC. The combination has been really nice. The fan was balanced out of the box and the motor bolted right into the fan unit. The fan and ESC fit nicely if not perfectly into the fuselage recesses in the plane. The whole power system was inexpensive and seemed to be top quality. I was off and running with my plans. Everything bench-tested beautifully and the motor/fan maxed out at 48 amps.

Next was the creation of the ailerons and rudder. It took some careful planning because servo wire routing was an issue, and weight and balance were also considerations. It wasn’t difficult, but I did take my time. If I had it to do again, I’d make the rudder a bit larger, but the ailerons turned out to be the right size.

The first step was to measure and cut the ailerons out with a new #11 Exacto knife. I kept the knife vertical when cutting and after the ailerons were separated from the wing, I angled the front edge back 1/8” from to top to bottom. Next was to measure the depth of the side-mounted servos and plan the recesses for servo wire routing through the wing to inside the fuselage. All of this work was done before I assembled the two piece fuselage and glued on the wings. 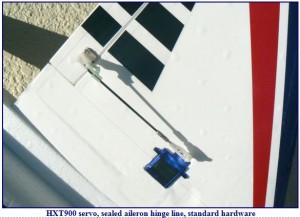 I hinged the ailerons using a white Monokote trim sheet cut into 1” strips. I did the top first, then flipped the aileron over onto the top of the wing and attached the bottom strip. The result was tightly sealed, very flexible aileron surfaces. I used HXT900 servos and hardware from my control horn supply. Routing the wires through the fuselage and up to the canopy area required enlarging the battery vent hole which was pre-molded in the fuselage. Everything looked good so I put the wings aside and worked on the rudder. 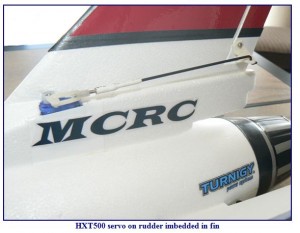 I used an HXT500 servo for the rudder and embedded it right into the fin. Routing the servo wire was easy too; it fit internally in the channel shared with the motor wires and then all the way to the front with the proper length extension. After cutting the rudder out, I sanded a “V” leading edge and epoxied the hinges. I’ll make the rudder surface about 20% larger for more knife edge authority the next time I make one, but it works OK as is. More rudder is always better, and all EDFs should have one!

After all the flight surface modifications were complete with pushrods attached and servos centered, I assembled the plane per the instructions. I used decals other than those supplied in the kit to personalize my F-16, and also used Monokote trim to add visibility in the air. The slight weight penalty was worth it, and the plane looks sharp according to my flying buddies. I’ve learned the hard way that these little jets need a lot of color in the air, with distinct differences between top and bottom. The kit decals offer really nice contrasts and some were used on this plane too. 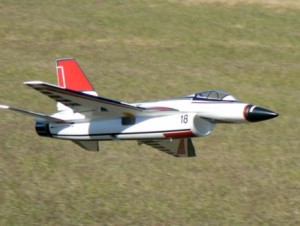 I chose four-cell 2650 NanoTech batteries for power. They tuck into the canopy area with a nice tight fit and just one small piece of Velcro holds them in place. The plane balances perfectly. My other electronics are moved all the way forward.

Flight performance is excellent, and I programmed my radio for a “normal” airplane setup instead of delta. I now have a flying horizontal stab per the real plane, full aileron control, and full rudder control. I mixed elevators and ailerons to a switch which gives a rocket-like roll rate. I’m also experimenting with flaps and spoilerons which are currently a work in progress. After the first two flights I cut a small rectangular cheater hole an inch in front of the fan on the fuselage bottom. It’s invisible in the air, provides an increase in the scream of the motor, and more speed. Good move! 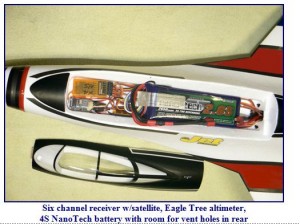 The plane weighs 8 ounces more than the stock setup; 28 ounces versus 20. Wing loading jumped to 20.1 ounces per square foot up from 14.8, still very manageable for a jet. Flight times are 3-3:30 minutes, but truthfully seem longer because the plane is so quick. I could get more time if I laid off the throttle a bit more, but hey, this is a jet! I don’t hand launch this one. Instead we launch off a catapult/bungee setup and our planes are at flying speed as soon as the bungee releases. The F-16 can be landed safely even if there is a “flameout” on launch. 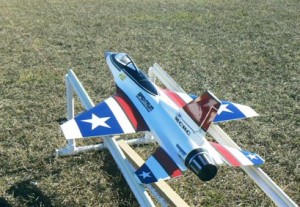 Constructing the plane with the modifications was well worth the time and effort. Of course there will be a next one and it will feature ailerons and a larger rudder with the stock motor/fan setup. I’m looking forward to that assembly and my target flying weight is 22 ounces. The new kit is already in my shop, having been recently acquired from Hobby People last month at a bargain. If you’ve thought of trying an EDF, the hundreds of pages on line attest to the Phase 3 F-16 as a great choice for your hangar, and the mods described on line make my plane look tame! Can’t wait to get started on the next one!