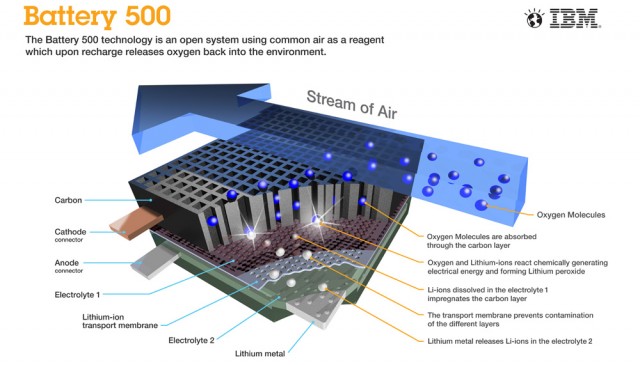 As part of its Battery 500 project — an initiative started by IBM in 2009 to produce a battery capable of powering a car for 500 miles — Big Blue has successfully demonstrated a light-weight, ultra-high-density, lithium-air battery.

In IBM’s lithium-air battery, oxygen is reacted with lithium to create lithium peroxide and electrical energy (pictured above). When the battery is recharged, the process is reversed and oxygen is released — in the words of IBM, this is an “air-breathing” battery. While conventional batteries are completely self-contained, the oxygen used in an lithium-air battery obviously comes from the atmosphere, so the battery itself can be much lighter.

The main thing, though, is that lithium-air energy density is a lot higher than conventional lithium-ion batteries: The max energy density of lithium-air batteries is theorized to be around 12 kWh/kg, some 15 times greater than li-ion — and more importantly, comparable to gasoline.

Therein lies the crux of IBM’s Battery 500 project: Current battery tech simply cannot come close to gasoline, which is why we’re surrounded by electric cars that are lumbered down by massive batteries that can only go 100 miles — and why gas still rules supreme. Eventually (in another 10 years or so), li-ion batteries could be replaced with li-air batteries that are a tenth of the size and weight, and yet last just as long — or, of course, li-air could replace gasoline.

Lithium-air batteries aren’t a new idea: They’ve been mooted since the 1970s, but the necessary tech was well beyond the capabilities of then-contemporary material science. Today, with graphene and carbon nanotubes and fancy membranes coming out of our ears, it seems IBM — with assistance from partners Asahi Kasei and Central Glass — now has the materials required to build a lithium-air battery. There is a video embedded below that details the electrochemical process of an li-air battery.

Supercomputers also played a big part in this breakthrough; IBM isn’t a battery-making company, after all. IBM Blue Gene/P supercomputers at IBM Research in Zurich and Argonne National Laboratory in Chicago were used to model and optimize the li-air chemistry. The battery prototypes themselves are being built at IBM Research Almaden, California.

to see the rest of the article and video go to: http://www.extremetech.com/computing/126745-ibm-creates-breathing-high-density-light-weight-lithium-air-battery 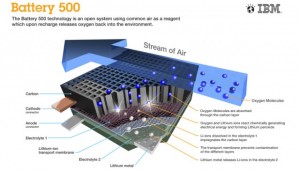