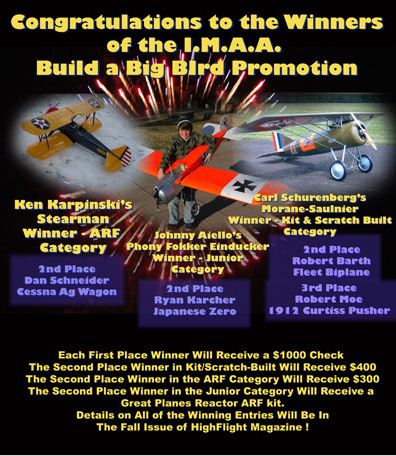 The winners of the IMAA’s “Build a Big Bird” contest were announced at Joe Nall last week; congratulations not only to the winners but to everyone who participated.

The IMAA (International Miniature Aircraft Association) is an AMA special interest group dedicated to flying and promoting gian-scale aircraft, and this contest was open to new and existing IMAA members. This contest was intended to be fun, so model cost was limited to $500 (as the rules note, “Special deals from your uncle Bob’s basement don’t count!), and there were three categories: kit or scratchbuilt, ARF and Junior for those 19 and younger. Each winner received a $1,000 check, and there were prizes for second place, too!

Details of the winners will be in the fall issue of the IMAA’s official magazine, High Flight.