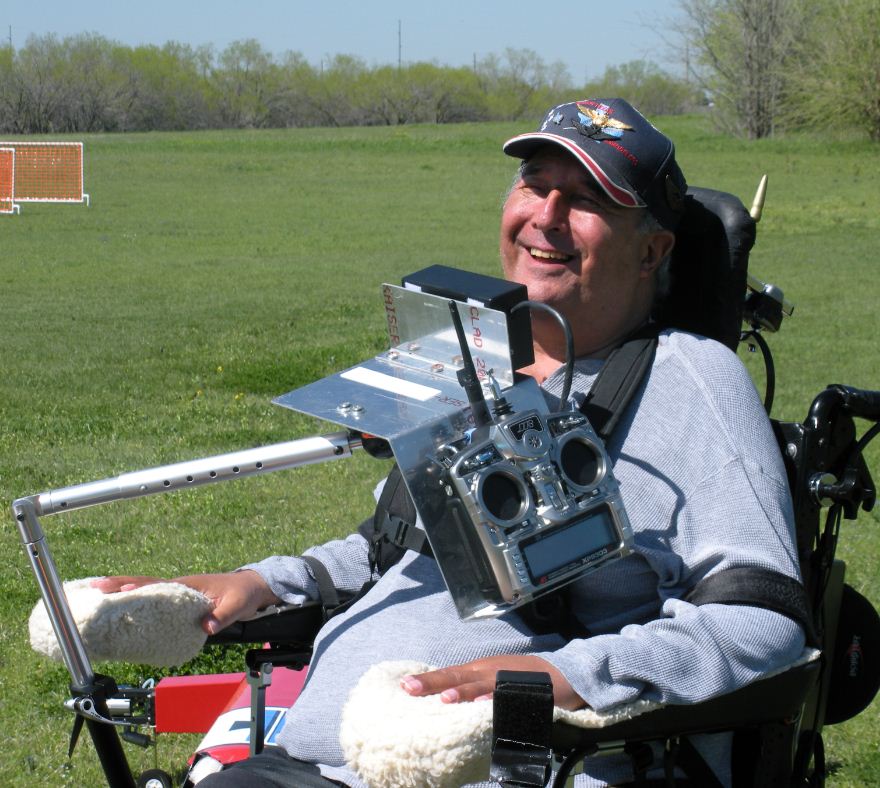 We featured Lad Doctor’s inspirational story in “Final Approach” in the October issue of Model Airplane News. Here is Lad’s complete article along with additional photos and his contact information.

I have been very fortunate over a 32 plus year flying career, started as a Naval Aviator, to fly well over 80 types of aircraft. Most all aircraft would fall into what is termed “Warbirds”. On July 29, 1999 I was involved in a very bad accident that left me paralyzed from the neck down. That certainly ended my wonderful flying adventures, or at least so I thought. I was invited on two different occasions to give speeches to the North Texas Aeromodelers Club. I have an extensive collection of original flight manuals for most of the World War II, Korean, and Vietnam era aircraft I have flown. These would be the focus of my speeches. Most of the guys were interested in how the real aircraft flew in comparison to RC scale models. 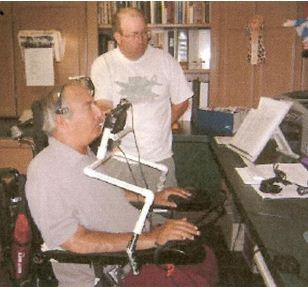 At the end of my second speech several members: Danny Volgamore; Gary Saba; and John Larsen approached me with the idea of getting back into the air. This would be accomplished by the utilization of radio controlled aircraft. They asked if I was willing to give it a try? Because of my love of aviation and in that I had already written articles regarding other projects previously accomplished while being paralyzed, this suggestion intrigued me. By His Grace I believe my purpose is to demonstrate to other handicapped people what can be accomplished if they just don’t give up on life. I told the members that I very much enjoyed thinking outside the box, and would love to give it some serious thought. I came up with a few ideas, and Gary Saba volunteered to contact the major transmitter companies to see if their engineering staff could give some pointe rs. None of the companies were willing to give any help. Perhaps they may have thought we were looking for free equipment or sponsorship. In actuality all we were looking for was some engineering input as to the feasibility of my ideas. Unfortunately, many pressures of life can cause peoples priorities to change, and I am fully aware of this. To accomplish things, it is necessary for me to ask others to help in my projects. I have found this to be a true blessing, because I have made many new friends by asking for help. Time was, however, slipping by and I was getting rather depressed with what I felt was a general lack of movement in the project, but beggars cannot be choosers. One of my character traits, good or bad, has always been to move rapidly on anything to which I put my mind. This was but one of many hurdles I have had to learn to cope with, now that I am no longer able to do things for myself. I mentioned my frustrations to Danny (pictured above right) at one of the club meetings, and pretty much told him that I was prepared to just scrap the entire project. He came by my house the following week and said that he believed that the Lord had given me many talents and that we could successfully complete the project. Danny became the driving force to keep my spirits up and moving forward through this entire adventure. The first major event that took place was when Gary spoke to a friend who is familiar with most all transmitters. 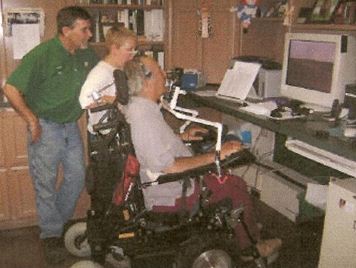 The input he gave was that he felt the JR 388 would be the most versatile transmitter to attempt to modify. Danny happened to have one and donated it to the cause. He immediately enlisted the help of Tim McBride and his son Nick (pictured left). In two evenings we had our first prototype to place the transmitter in front of me so that I could start to practice with a computer simulator program.

We took this prototype to the flying field and immediately found two major flaws. The first, was the PVC piping was just not rugged enough for the field. The second problem, which plagued us for quite some time, was that while using the standard transmitter mounted in front of me greatly hampered my visibility. I was always trying to find a way to look around the top part of the transmitter. At this time I was flying a beautifully constructed Sig Cadet Senior that belonged to Danny. For some reason, I was always lining up on the far side, and off the runway. I analyzed what I was doing, and realized what the problem was. It was caused by my lack of visibility over the transmitter. It was apparent that I had  two choices. One was to fly from our parking lot, so that I could have clear visibility of the landing area. Better yet, it was evident that some major modifying of the transmitter was going to be necessary.

I had my assistant Beau Otto, who has become my arms and legs, open the case of the JR 388 transmitter so that I could see the internal wiring situation for myself. What needed to be done looked quite straightforward to me. Just to be on the safe side I called a knowledgeable acquaintance to ask his opinion. He has postgraduate degrees in electrical engineering and physics. I explained the situation over the phone. He asked a couple of simple questions and was of the opinion that we could extend the internal wiring just about any reasonable distance and not have any problems. I took the transmitter down to see my trusted friend Bill Bischoff (pictured immediate right) 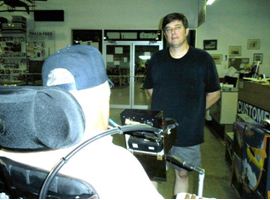 at Mike’s Hobby Shop, owned by Mike Darnell (pictured below). I was kind of hoping that Bill would take on the project himself. He was of the opinion that someone else could do a better job, and he had just the person in mind. Along came John Reed. I explained in as much detail as I could what we were looking to accomplish. The results of John’s efforts were nothing short of miraculous. It allowed me a clear view of the aircraft as close as 8 feet away. Once I switched to this modified transmitter, I found myself landing in the middle of the landing area. This certainly gave me a great deal more confidence and I started to expand my flight envelope. Danny built a cross stick to make reaching the throttle easier. On takeoff as I added full throttle I found that I had to leave it set that way until well into climb out. This was because I had to momentarily move my mouth off of the control stick so that I could reduce the power setting. The biggest drawback to this set up was the effect it had on landings. Once I set the throttle for landing, usually at idle, I was totally committed to that landing. This made for some pretty interesting landings! Not to mention Danny having to repair, on several occasions, the landing gear. This led to several conversations between me and Gary, regarding how to get some kind of throttle control without leaving the control stick. John Larsen said that he could program the transmitter to give me any amount of throttle response by using the high and low idle setting feature. This sounded to me as though we were onto something. 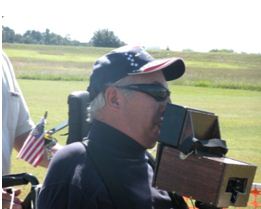 Gary and I started experimenting with what part of my face I could use to activate something while still maintaining full control of the aircraft. We came up with the idea of using my chin to activate what I termed a “bump switch”. I wish I could take credit for dreaming this idea up, but that would be a lie. The idea came to me because of my knowledge of some First World War aircraft that had a “blip switch”. Some of these early aircraft had no throttle , the engine ran flat out or was not running. It was time to pack up the transmitter and head for Mike’s Hobby Shop and a talk with Bill. I explained to him what we were looking to do, and he said he had a few ideas. I am in great admiration of Bill’s breadth of knowledge, the love of a new challenge, and the ability to think outside the box. A few days later he called me to come down and see the modification he made.

What he had done was to remove and bypass one of the auxiliary switches of the transmitter, extending the wires to my control box and installing a momentary switch. John Larsen set the high idle to give me 50% power whenever I initiated the “bump switch”. This was truly the answer we were looking for. It allowed me the ability to momentarily increase power so as to reestablish a better approach glide slope or even, by holding the switch down with my chin, wave off a landing and climb out. It also gave me the ability to increase power from a cruise setting to have enough power to do basic aerobatics. It has taken quite some time for me to train my mouth so as to make the fine input adjustments required to the controls so as to demonstrate acceptable flight precision. If I am nothing else, I am a perfectionist to the max. I am therefore, quite hard on myself when flights don’t go the way I intended. I am not aware of another high level injury quadriplegic flying RC aircraft. I am now quite comfortable, and confident in my flying skills. We are now brainstorming on how to modify the transmitter to allow me to have rudder control. Until we can figure this problem out I will be limited to the basic aerobatic maneuvers. Pictures of the modified transmitter and some photos of flying are immediately below. 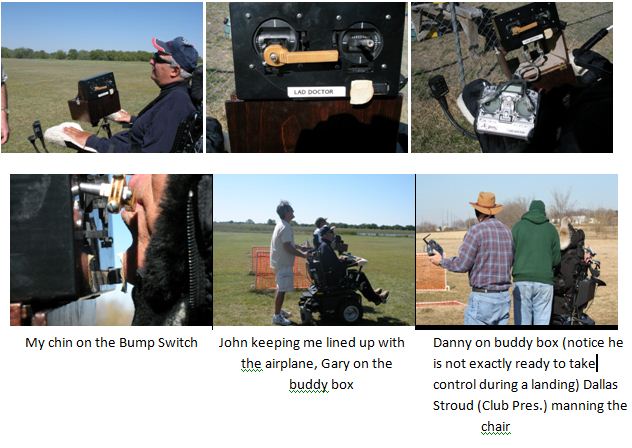 It is really no longer necessary for me to have someone on the buddy box, except for one little problem. Due to my condition, there are times when my blood pressure will get quite low. My first symptom of this is when I start to lose my eyesight. Not exactly the best way to fly an RC aircraft.

I would like to take a moment to tell all handicapped people that life does not end with the physical circumstances in which you may find yourself. I have lived it for almost 14 years and can tell you that life is not going to be easy. I will also tell you that there will be dark days when you consider what you have lost. Those thoughts will forever be with you. I truly believe with a deep and committed faith in God, your life, regardless of condition, is going to be either richer with Him, or poorer with the alternatives. I will pray for the riches of life to be yours, but ultimately, THE CHOICE WILL BE YOURS! COME AND JOIN WITH ME AND HIM IN FINDING A WAY TO ACCOMPLISH A BETTER LIFE! TURN THAT TELEVISION OFF, AND START THINKING OUTSIDE THE BOX. YOUR HANDICAP WILL CAUSE YOU TO RELY ON MANY OTHER PEOPLE FOR HELP. I HAVE MADE SOME WONDERFUL NEW FRIENDS BY REACHING OUT AND ASKING FOR THEIR HELP.

If anyone has questions regarding this adventure, prior ones, or the ones I have on the drawing board, feel free to contact me at: laddoctor@att.net 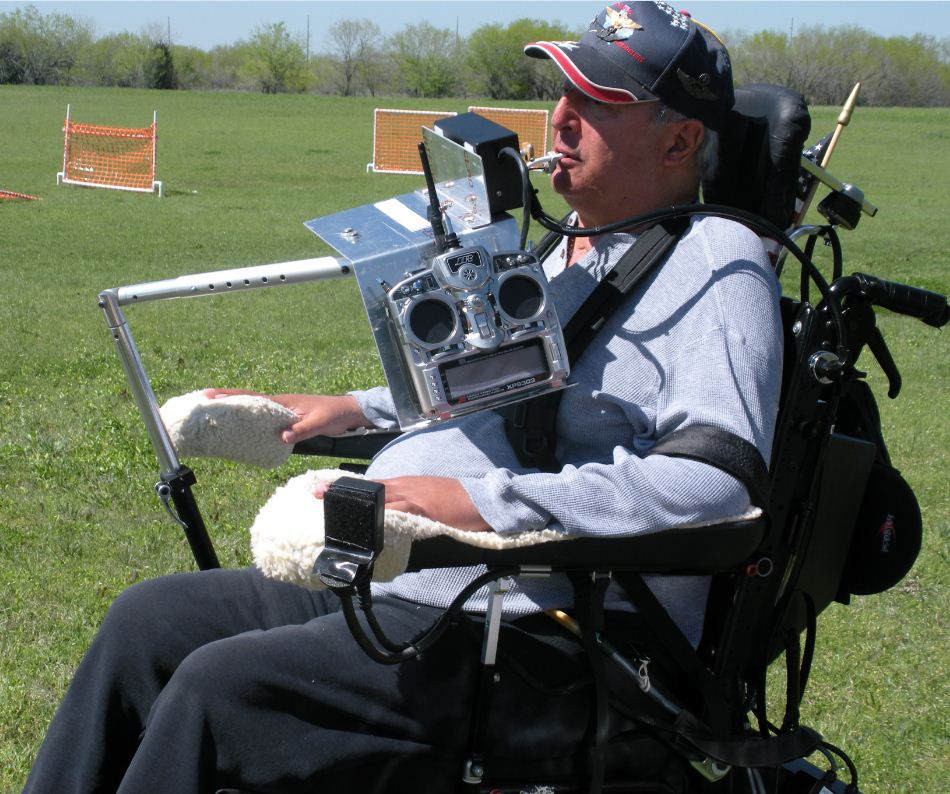