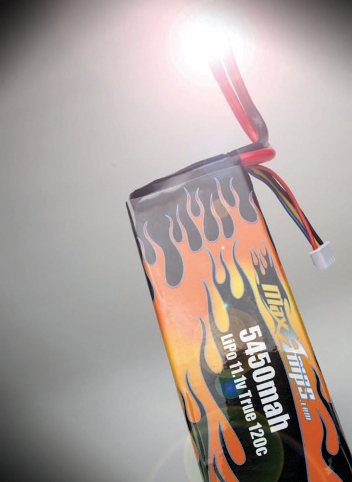 When it comes to electric aircraft, one of the key components is your battery pack. It is the only power source to keep your aircraft in the air, requires constant maintenance, and if not watched it will most likely be the first thing that needs to be replaced. But with the right care and careful monitoring, a battery pack will most likely last for quite some time. So if you are looking to add some extra time to your battery pack’s lifespan, read on and learn some expert tips on the care, feeding and maintenance of that vital aircraft element, the LiPo battery pack.

The C-rating designation on a battery pack lets you know just how much energy you can safely pull from that pack. LiPo battery packs can release amp draw based on the requirement of the power system. However, because there is no regulator to limit the amount of power draw from the battery, the system can actually pull too much from the pack, causing it to puff up or be destroyed. This is why understanding C-rating is so critical to maintaining the health of your battery pack. The other key essential is that you need to have some way of monitoring the amount of amperage being pulled from the pack.

The designated C-rating on a pack tells us how much amperage you can safely pull from that power source. The most common one is 20C, which means that you can pull out amperage up to 20 times the size of the battery pack. A 4200mAh battery that is rated at 20C can discharge up to 84,000mA, or 84 amps.

The C-rating will be clearly marked on the label of the battery so that the pilot will know exactly what they are buying.

Using a watt meter allows you to get real-time power usage of your aircraft while the system is in use. Of course this reading is done on the ground. If you want data reading during the flight, telemetry systems are the way to go.

How do you know how many amps your power system is pulling? Purchase a watt meter and measure amperage draw of your system when it is first installed. A better way is to take advantage of many radio systems out there that are capable of real-time telemetry. By monitoring the pack throughout the flight you can easily see exactly what the power system is pulling and when it requires peak performance from the battery pack.

Here is Mike getting his latest electric plane ready for its first flight.

Our long time contributor Mike Gantt has this to say about C-rating: “Most of us want more power, and a higher C-rated battery will ‘deliver more energy,’ and that means higher performance. The most important difference between batteries with a different C-rating is the fact that the higher rated batteries suffer less from voltage drops under load. This ability to maintain a higher and more consistent voltage is what typically generates the high performance we enjoy. This is also where my speed controller’s cut off came into play. When a lower C-rated battery’s voltage dropped down to a certain level, my speed control is programmed to shut down, which helps to save my batteries from dipping into too low of a voltage.”

Save your battery by not running at full draw all the time. While it is possible to run your battery at full C-rating, you shouldn’t. By keeping the amp draw to about 75% of the full C-rating amount, the battery will run much cooler and will last longer than if you constantly pull the amps at maximum level. If possible, try to match the battery pack to a power system that will constantly pull amps at about 75-80% of the pack’s C-rating.

In order to charge over 1C safely the charger will have to be rated for rapid charging and have a balance board for your pack.

CHARGE RATE: THE OTHER C RATING

The standard for most battery packs has been to charge them at a 1C rating. However, charging a higher C-rated pack can often times be completed in less time, as the higher C-rated packs can be recharged using a higher charge current. Some packs can have a “max charge rate” of 12C, which can shorten charge times considerably. Is this safe? Yes, but as usual always balance-charge your packs regardless of charge rate and use a battery charging bag or other container while charging. Even military surplus store bought ammo cans can be used as a great charging box and for battery storage afterward. A high-quality charger usually delivers high-quality results and will have a charging system with built-in balance ports.

Additional safety devices include a temp-monitoring probe, a battery-powered smoke detector set close by the charging station for an added alarm, and a fire extinguisher that can put out an electrical fire. For the safety and longevity of your battery pack, when possible always charge your battery at 1C, which is 1 times capacity and this usually takes about 20 minutes to an hour. Doing this will extend the life of older packs. Finally, no matter how you charge, remain in the vicinity so if any charging issues should happen, you can immediately rectify the situation.

There are some other things you can do for long-term LiPo storage that will prolong the life of a battery pack. How and where the packs are stored is perhaps the biggest factor in prolonging their performance. Keep batteries in a cool dark environment and not in a place with temperature extremes such as a car, a trailer or a non-insulated storage shed. High temperatures will destroy a battery in short order, so always keep battery packs out of the sun and heat. The other extreme is allowing packs to freeze; this will also damage them beyond repair. A refrigerator that maintains a temperature of about 40 to 45 degrees is the perfect place to store packs (but don’t use the kitchen refrigerator that has food in it!). Allow the packs to come to room temperature before using or charging them.

LiPo batteries will self-discharge at a very slow rate; but over time, they will lose their charge. Packs that go completely dead, or fall below 2.5 volts per cell, can be damaged beyond repair and become useless. Never store a discharged battery for a long period of time. Also, don’t store a fully charged battery because the cells will drift and discharge at different rates; this will result in a pack where the cells have become out of balance from one another. If left unbalanced, the cells in this battery pack will continue to drift farther apart after each charge and discharge cycle. The best thing to do is put the batteries away with a “storage charge” of about 3.85 volts. This gives each cell enough voltage to keep it stable for long-term storage. Now the cells will discharge at a similar rate and maintain a better-balanced pack over time.

Many packs get a little puffy; this can come from them getting a little hot during the flight, or many other reasons. However, a little puffiness will not harm them; the key information on the health of the battery is how well it charges and holds on to that charge. If the pack is charging ok and the battery seems to perform normal, keep an eye on it and make sure it does not get overheated. Check the temperature of the pack after the flight, and make sure there is enough airflow over it as needed. If the pack is puffed up so that all of the wrapping is very tight, with no give when you push on it, then that is a different story. In that case the battery will most likely not be performing as well as it used to with a fair drop off in charge input and discharge output. Then you likely have a bad battery that will need to be replaced.

mAh Milliamps hour (mAh) is often used to refer to the output capacity of battery packs. This is the amount of current you can expect to pull from your packs during normal operation. Think of mAh as how much flight time you have from the pack. A smaller battery, like a 2400mAh pack, will provide a shorter flight time than a larger pack, such as a 4200mAh pack.

VOLTAGE Voltage is often used to increase the power to the motor. Supplying more voltage to the motor will make it spin faster and will produce more rpms for the prop. Motors will have a kV rating on them; this means that for every volt you supply to the motor, it will spin that kV value faster. The faster the prop moves, the more speed and power you’ll get from the plane. A simple way is to think of battery voltage as power and performance.

2P3S, etc Battery packs have cells arranged in different configurations; this is often referred to as series (S) and parallel (P). When connected in series, the negative terminal of one cell connects to the positive terminal of the next cell and so on. If you have 3 cells connected in this manner, it’s called a 3S pack. A series-connected pack supplies more voltage than a single cell, and the amount depends on how many cells are connected in this way. In this example, the 3S pack has 3 cells × 3.7 volts, which is equal to 11.1 volts.

All battery labels should have a complete description of the battery size and chemical makeup, C-rating and voltage.

These tips from our pros should give you a few more good flights from your battery packs. Try them out and remember knowledge is power, or in this case more power and a longer life.