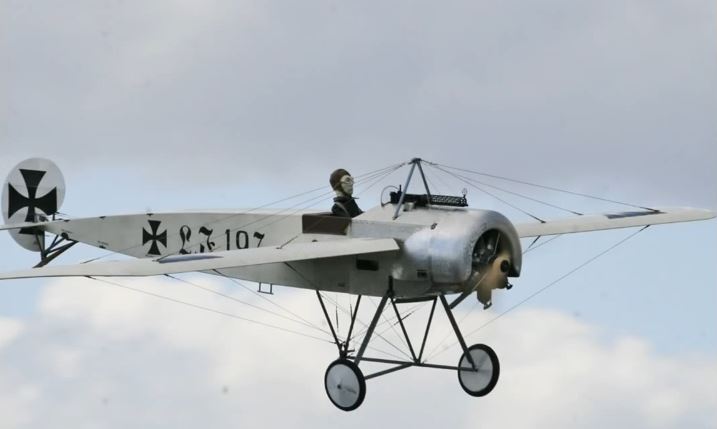 Sleek, sophisticated WW II fighters usually get more props than earlier era warbirds, but this 40-percent-scale Fokker E.1 may change your mind. Made famous by none other than Max Immelmann himself, the Eindecker had wing warping instead of ailerons, and the model demonstrates just how well they worked! Built by Gerhard Reinsch and flown at the Yorkshire Air Museum in Halifax Way, York in the UK, this incredible model is powered by a Valach 120cc gas 4-stroke and weighs in at around 42 pounds. Would you believe Gerhard spent just three weeks building it from the Paolo Severin kit? (We wonder if he sleeps!)  The video is a bit long, but I promise it’s time well spent — the plane flies Immelmans, stall turns, split-Ss and even a very axial “aileron” roll! The video even includes a bit of the wing warp in action as well detail photos of this gorgeous aircraft.  Many thanks to Dean and Pete Coxon for sharing their video and reminding us how incredible those early flying machines were!