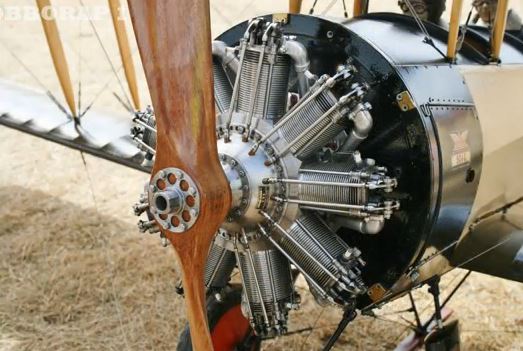 Andy Johnston must take his RC modeling very seriously … why else would he spend over 3 years building a true-to-scale, rotary Bentley engine spending another 2 years building an Avro 504K from plans, specifically for the engine?  The 9-cylinder powerplant has cast-iron liners that are 1mm thick, aluminum finned barrels and a total of 347cc displacement for a range of 700 to 3500rpm with a 25.5×23 prop that has a scale blade shape.  The engine spins, just like its full-size counterpart! The Avro 504K is enlarged to 27% scale  from 1/4-scale David Boddington plans and has a 116-inch wingspan. It is covered in linen solartex and has freehand markings. Andy notes, “The Avro was designed around the Bentley with the provision for exchanging it for a Zenoah 62. The Avro’s maiden flight was on 31st March 2012 with the 62 (and 3kg lead up front, the difference in weight between it and the Bentley) to prove the airframe and it was a great success so a further six flights were made to complete the CAA tests on that day before making the swap and further tests. The Bentley engine build started in August 2004 and the maiden flight in the Avro was in April 2012. There are no noticeable effects of gyroscopic precession from the rotating Bentley affecting the handling unduly, just a slight difference in left and right which may be due to torque and the coarse-pitch propeller. Twenty-two flights with Bentley to date.” Enjoy this video, courtesy of tbobborap1, our videographer friend across the pond.