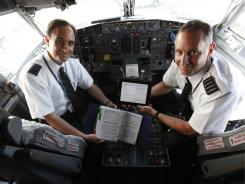 This story was covered by USA Today and i found it rather interesting, very soon tablets will be everywhere. If you would like to see the video on this story check it out here: http://usat.ly/iF14u9

LOS ANGELES — As part of his daily routine for the last 15 years, Alaska Airlines pilot Randy Kleiger hauled his 40-pound airline manuals onto his jet, using them to check everything from routing information and company policies to airport parking.

But the 1,000-plus pages of paper are soon to be history, thanks to his employer’s decision to ditch the manuals by mid-June in favor of the Apple iPad for the entire Alaska Airlines fleet.

“Now we have all the information in the iPad,” says Kleiger, sitting in the cramped cockpit of an Alaska Airlines flight at Los Angeles International Airport. “And that makes it more efficient and safer,” because he doesn’t have to fumble all over the cockpit for the various manuals. Everything’s in one place.

Alaska is transitioning all 1,400-plus of its pilots to company-issued iPads. The plan aims to improve fuel economy by cutting back on the weight on board. Also, documents can be updated more frequently. Alaska is the first commercial airline to make such a move. Delta and American, among others, are considering similar steps.

The iPad, which began primarily as an entertainment device when it was launched in 2010, has captured the imagination of many other industries in ways that Apple never even imagined, says Richard Doherty, an analyst at the Envisioneering Group.

It has shown up in restaurants, as a more topical and graphical menu replacement, as well as medical offices and hotels. “I can see the day when you get pulled over by a cop for a speeding ticket, and he or she pulls out an iPad to write your ticket,” says Doherty. “There’s really no limit to where this could all go.”

What the pilots can’t do with the iPad — just like passengers — is have the unit turned on during takeoff and landing. They have to power down before reaching 10,000 feet, due to Federal Aviation Administration regulations, and concerns about interference.

What they won’t do: Play Angry Birds, watch movies or do e-mail. The pilot’s iPad is not connected to the Internet — even though Alaska has Wi-Fi on the planes, says Kleiger. “That’s against company policy. And, besides, we’re professionals.”

Before heading onto the jet, Kleiger says, he connects the iPad to the corporate server and syncs the manuals. Now, before he flies, “I can have the latest revision and most up-to-date information.”

And what about running out of juice during a flight?

Alaska pilots are asked to charge up their units before arriving to work. And there are two iPads in the cockpit, just in case.

Still, says Kleiger, they’re usually on for only about 15 minutes during a flight, using the GoodReader app, a technical app for pilots.

Credit to bringing the iPad to the skies goes to a group of motivated pilots and Apple gearheads who persuaded Alaska to give the iPad a try. The company did a trial with 100 pilots earlier in the year and liked the results.

“At first, like any of us brought up in the paper world, I was on the fence,” says Stephen Lemley, an Alaska pilot who was involved in the tests. “I knew where everything was in the manuals. But after about a month of playing with this, it became very apparent that this was the way to go.”

In March, the FAA approved the use of iPads in the skies.

Boeing subsidiary Jeppesen Mobile got authorization from the FAA earlier this year to make its app with aeronautical charts available, instead of paper. Charter service Executive Jet Management makes the app available to its clients.

“Some of our customers can have 70 pounds of paper charts,” says Rick Ellerbrock, chief aviation strategist for Jeppesen. “Seventy pounds of weight can burn a lot of fuel.”

Jeppesen’s app has been downloaded more than 100,000 times since the company began offering it in February.