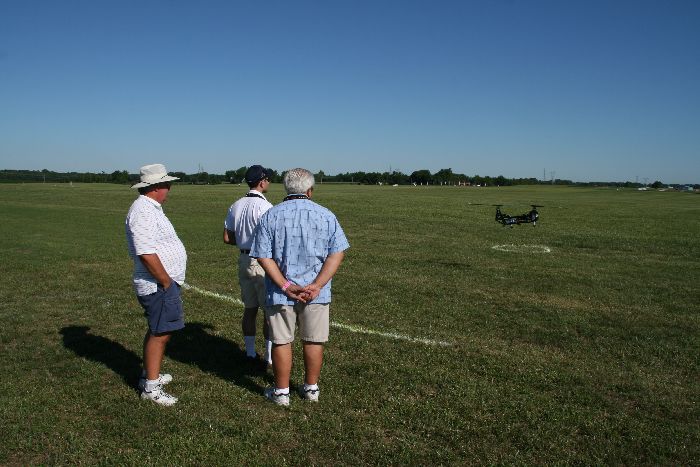 I thought yesterday was a pretty good day for flying, but today was even better. Sunny skies, 80 degrees and only a light wind made for a great day. This was the last day of NATS scale, but they were out in force. Joel Rosenzweig from Marlborouch, MA had his Hirobo CH-46 tandem rotor out for test flights. This was orginally designed for a nitro engine, but he machined the electric motor mounts to convert it to electric, using two 5S 5,000mah batteries. Peter Wales, the NATS Scale CD also had his Sikorski Sea King, with Pahl turbine power, out for some circuits. This is a huge helicopter, weighing in at 38 pounds and swinging 5  1800 mm rotor blades. Tom Mast was also flying his self designed Rotormast V-22 Tilt Rotor, with twin electric 3-blade rotors. Tom has this great flying machine available as a kit for those of you who are looking for a completely different project. Check out his web site at www.rotormast.com.

Wayne Mason from Radcliff, KY also had his magnificent Indy Helis AH64 Apache out for all to see. This has to be the most detailed and real-life helicopter I have ever seen. Over 7 feet long and 34 pounds, electric powered using two 10S 6800 packs, it has moving elevator, Pilots heads, pilots arms salutes, gun and TADS system. This one looks more real that the full size machine.

Several new helicopters will be coming out in the next few weeks. I talked with Rocky McCarter, the Thunder Tiger US Rep, and he showed my the new Raptor G4 (Generation 4) that will be available for either 90 size nitro or electric power, with or without a flybar. Each version can also be changed to the other in about an hour. Another new helicopter soon to be released is the new Whiplash by Miniature Aircraft. Bobby Watts and Chris Lund co-designed this helicopter, which will also be available as a 90 nitro or electric, flybar or flybarless. This is a simple and light weight design with direct servo control of the all metal ccpm swashplate.

As you can imagine, there are way too many products to describe here, but look at some of the gallery pictures to get an idea of the large turnout for this event. Stand by for more reporting tomorrow.