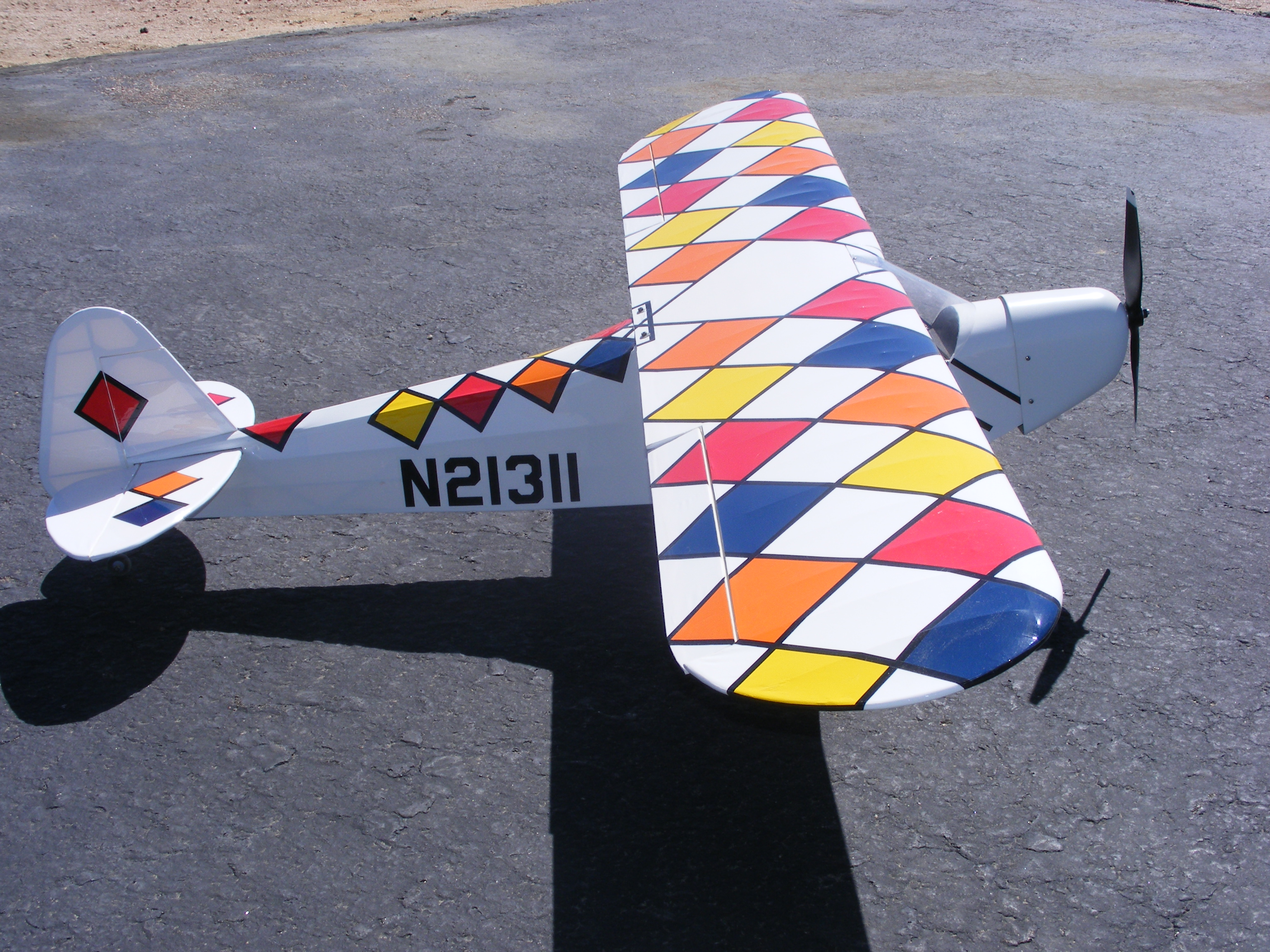 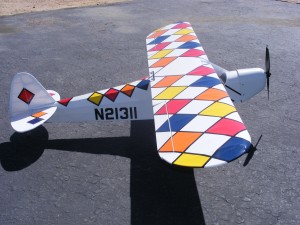 The J 3 Cub is a great flying aircraft. I always enjoy watching the guys at the field fly their Cubs. Eventually got A Cub of my own. This model of the J 3 Cub was built from an old Sig Kit I purchased on e-bay a many years back.  J 3 Cub’s are traditionally finished with “Cub Yellow”covering. You may see the Military finish as well. Olive Green with varying accent colors and stripes. I used a little creative license on my choice of finish covering. Like most of my planes, I like them to be distinctive. A quick note on my philosophy regarding finishes of airplanes:

Remember someone has to be the first. There’s no wrong way to go. Just have some fun along the way. 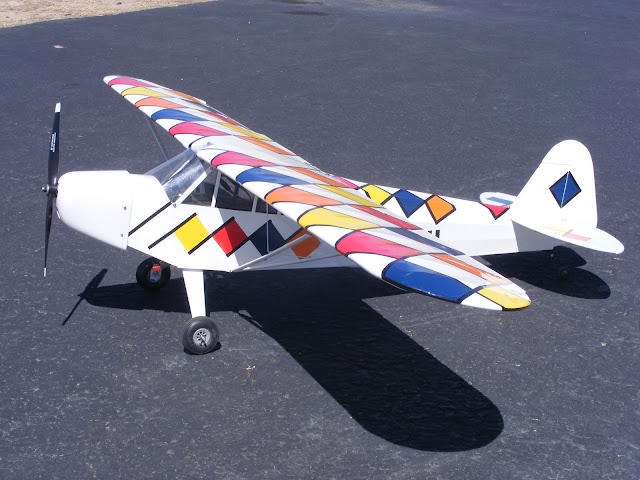 The Sig kit was well designed and anyone who  has built a few kits should have no problem with this one.

The model is very light when finished and has very low wing loading.  The benefits of  low wing loading  become very obvious in  flight. Improved sensitivity of the flight surfaces while performing  maneuvers and extend flight times. Not to mention softer landings.  The ground handling is typical Cub. The Cub can be very challenging to keep  straight  and requires a lot of rudder impute to keep it on track during power up for take offs. The plane has a tendency to turn left abruptly if too much power is applied rapidly. So just ease the power up slowly for your first flights. After you get the hang of it, you can jam the throttle and go. The plane leaps into the sky in a matter of a few feet if you have enough power.

The Sig  J 3 Cub has a one piece wing design with functional wing struts. The wing is very light and needs the struts in order to operate safely. Catastrophic wing failure will a cure if the struts are not used. I watched a pilot friend take of with a simlar Cub. He neglected to install  the struts. When asked, he told me that they were cosmetic and not really necessary.

As he pulled out from a loop under light power. The wing folded in half and he was at the controls of a not so guided missile heading to the ground rapidly. I’d say the fuse beat the remains of the wing to the ground by a good 5-6 seconds. As my friend learned. If you take the time to install the struts and you save yourself the time it takes to build another Cub. 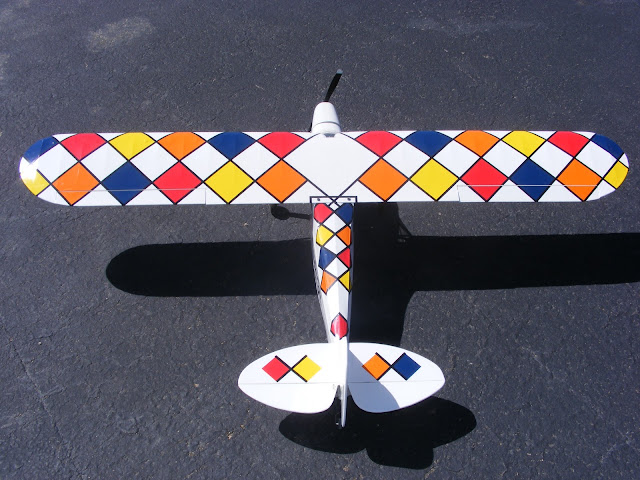 The whole plane was first covered with white UltraCoate . I used Monokote for the accent colors. It took almost eight hours just to design and apply the covering on the main wing. Once I had my color scheme figured out the rest of the project moved quite a bit faster. I was able to transform the rest of the plane from basic white to what you see here in about 6 hours or so. Sometimes the hardest part is figuring out what you want to do. This often takes  longer than  the actual doing.  Horrible grammar, but you get the point.

The best thing about this color scheme. Visibility. You can really see this plane in the sky! 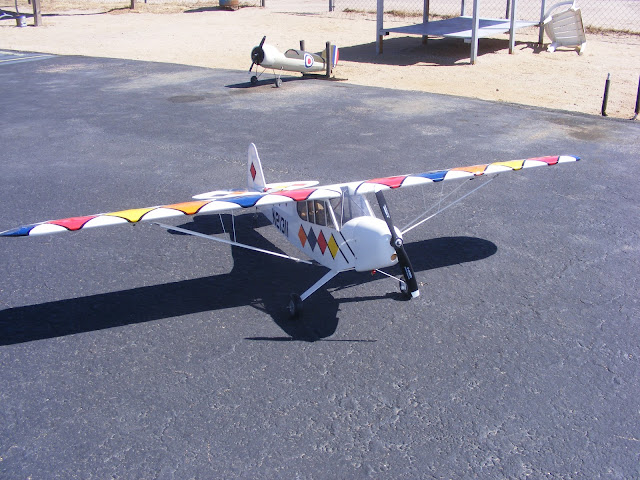 Note on the set up.:

As with all my planes. This is an e-conversion. An E-flight 32 bl out runner motor and a Castle Creations 60 amp speed controller used for the flight power.  A separate 5 cell 1500 mah NiMa battery is used for the receiver and flight servo’s. A  4,000 mah 30 C  4 cell (14.8 volt) Zippy battery from Hobby King is provides the main power supply. They are affordable and provide good performance for the money. Flight performance is better than scale and i have endless vertical. Loops are tight and aileron rolls are reasonably axial. Takes offs require about 20 feet of roll out under full power and landing this plane is a matter of cutting the power and gliding in. This is a good semi scale model and I would suggest everyone have one as a relaxing  Sunday fly er. 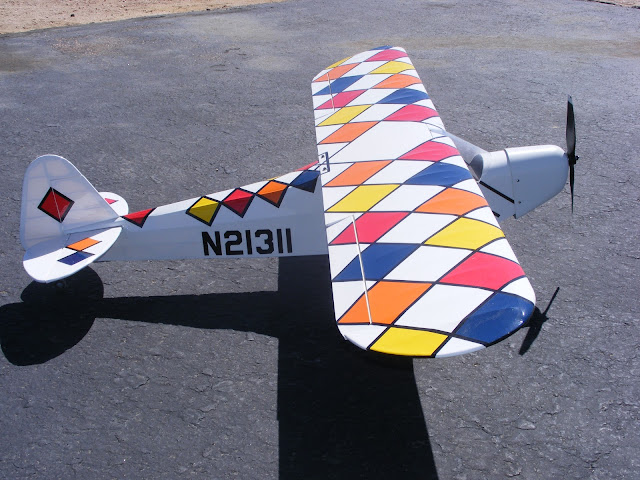 You may notice the absence of a motor on either side of the cowl. The wasn’t a motor in the kit I purchased.

Funny, It dosen’t seem to affect the planes performance one bit