It’s not every day an RC model builder designs and builds a classic WW II fighter from scratch and then brings it to a contest and wins the big Best in Show award. But that’s exactly what Jeffery Fiscus of Bridgeport, WV did with his amazing Focke Wulf Fw 190A3 when he walked away with the gold at the WRAM/AMA East show in Secaucus, NJ. But the story doesn’t stop here. Two months later, Jeffery brought his Butcher Bird to the Toledo show and took home a second place win in Designer Scale as well as the coveted People’s Choice Award. With a track record like this, it’s hard not to be impressed. We caught up with Jeffery to chat about his museum-scale Fw 190. 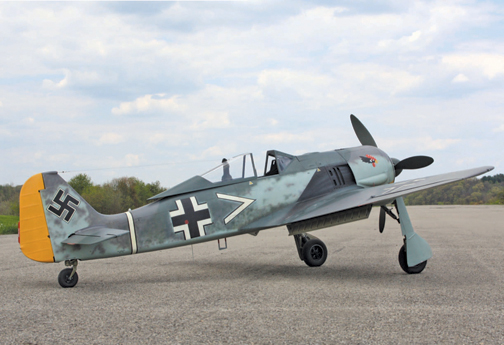 Model Airplane News:
Your Butcher Bird is simply immaculate. Why did you choose it as your project?
Jeffery Fiscus:
For as long as I can remember, I’ve always been drawn to the Fw 190; it’s one of those interests that we never know where they come from but seem to persist our entire life. I have designed and built RC scale models off and on since I was young. The Fw 190 I always delayed building as I wanted to develop my skills better to do it justice.
MAN:
What was the process like developing your plans?
JF:
For years I collected books and drawings, so I had a good place to start. My initial intention was to prepare a normal 3-view drawing with a bit more detail. Later in 1998 I visited the Imperial War and RAF museums in London to see an A series 190 firsthand, and this provided a lot of information to work with. With this information and manuals from Archiv Hafner and Arthur Bentley’s drawings, I was ready to start work on my drawings. So, in all, after 10 years of research, drawing and re-drawing, my [plans] set was complete. Well, maybe not complete, but finished for now, as I’m sure corrections and additions will continue for many years!
MAN:
So when did you actually start construction?
JF:
I started building the model in 2010 and test flew it (in primer) in July of 2013. The landing didn’t go so well, so after a year of rebuilding and completing the detailing it was completed in 2014.
MAN:
That is an amazing amount of effort and the drawings look amazingly detailed. Are they done in CAD, and do you have any plans to offer them for sale?
JF:
I have a total of 20 sheets and each drawing was drawn by hand and then arranged together on the sheet. The sheet was then scanned and the images re-traced using Photoshop. Yes, the scale drawings are sold for personal use only. Information for pricing and scale sheet sizes is available from me at fwjeff@ymail.com.
MAN:
What about that beautiful landing gear?
JF:
The main gear has been through three iterations. It started as a set of Gene Barton gear. For the first version I added scale scissors and lower gear door mounts machined out of aluminum. I also replaced the retraction arms with scale units also machined from aluminum. My Taig lathe with a milling attachment, gets quite a workout. The wheels were made by Glennis from my drawings for the scale detailing on the early type wheels. The detail on the main strut was made with basswood, including the functional mounts for the upper gear doors. Once these were installed in the wing frame I found the up-lock would not release due to the weight of the struts and wheels.

I rebuilt the entire wing frame and machined a new set of main retracts using a different lock geometry. This worked better, but they were still a bit weak with the original air cylinder. The landing gear worked well but wasn’t as smooth as I wanted. So, I sent them to Down & Locked for their electric conversion. They are loud and powerful, and very precise in operation. The retraction arms are still driven with an air cylinder so the main gear use both electric and air to operate. The entire tail gear assembly was machined out of aluminum using scale geometry, so the wheel retracts vertically in a straight line like it should. It is driven by cables and an air cylinder under the cockpit.

The model’s cockpit is simply breathtaking and took many hours of work.

The pilot seat, safety belt, and shoulder harness are scale and functional, used to hold the scale pilot figure in place.

MAN:
What did you do for the paint finish and all the great surface details?
JF:
The basic finish is normal 3/4-ounce fiberglass applied with West epoxy. Primer and clearcoat are from Klass Kote—wonderful stuff! Before starting the model I had spent about 10 years researching and visiting restoration shops. From this information I created my drawings, which include all of the interior framework and equipment in the aircraft. I knew the rivet patterns for the entire aircraft and also the skin joints, which are a mix of butt joints, plain overlaps, and joggled overlaps. The panel lines are built up with the Klass Kote primer following the full scale patterns. I also built up “pockets” on the skin for all of the access hatches, which were flush with the skin of the plane. Rivets were made using a soldering iron and a sharpened brass tube. Screws on the fairings are the heads of brass screws from Micro Fasteners. All of the access hatches, latches, and other details were made with patterns and silicon rubber molds. The actual parts were then cast using resin (Alumilite or Micro-Mark). This was very helpful in making the large number of latches on the covers. All of the details are to scale.

For paint I used a mix of Warbird Colors and Life Color (a plastic model paint). The Warbird Colors are very good but not exactly what I was looking for, so I used the Life Color paints to modify the colors slightly to match my color chips better. The weathering is fairly light on this plane; during that particular time the planes were better maintained and fairly new.

BEFORE STARTING THE MODEL I HAD SPENT ABOUT 10 YEARS RESEARCHING AND VISITING RESTORATION SHOPS.

Again, you feel like you could jump into the cockpit and take off. The Fw 190 has no bad viewing angles at all.

MAN:
Tell us more about the incredible job you did on the cockpit and instrument panel.
JF:
My goal was to have a fully detailed cockpit, even the firewall. I had actually helped with the repair of some full scale parts, rudder pedals, etc., so I had very detailed information to work with. The detailing is a mix of materials. The seat is built up with balsa and plywood. The seat belts are ribbon with metal fittings (all adjustments function correctly), and they are used to hold the pilot figure in place. The instrument faces and placards were drawn up in Photoshop from photographs of original full scale parts and printed on decal film. The larger details such as the gun sight, rudder pedals, control stick, etc., were made from patterns and molds and cast in resin. As an example, each rudder pedal is made up of six separate pieces and includes the leather strap and data plate. The rest of the cockpit parts were done similarly.
MAN:
Your model is truly a work of art. Tell us about the RC hardware and radio gear.
JF:
Thanks, 10 years researching and making the scale drawings, three years building the model, and they were worth every minute. The more I look at it the more I like how it turned out. I got to talk to Dave Platt at the Toledo Weak Signals show and one thing he said was to not fly a model you still like, the next flight might be a while.

The radio gear is pretty basic. I’m using a Futaba 7C transmitter but really need to upgrade to more channels. Servos are all S3004 standard servos. The landing gear is controlled by the Down & Locked controller and the air system uses Robart valve and tanks. The air cylinders are all from Clippard.

Here’s a look at the scale treatment of the wheel wells and inner gear door activation linkage—simply an amazing level of detail and weathering.

You can just barely notice the RC DLE 60cc twin-cylinder engine behind the dummy radial details.

This is a view of the panel line, rivets and details from the underside of the engine cowl. There’s even subtle oil staining added.

MAN:
Any plans for another masterpiece in the future?
JF:
The next big project will be a Focke Wulf 187. This was a twin-engine heavy fighter that only had a half dozen examples built. They were used to protect the factory in Bremen and also were used in one of the gunnery schools. There isn’t a lot of documentation on the plane but enough to make a good model. It will be 1/6.8 scale with an 88 1/2-inch wingspan. Power will be two VVRC 21cc gas engines, and airframe and retracts will be scratch-built. So far I have the plans about 70% finished and have pretty much worked out all of the basic design features.

In the meantime, for fun, I’m working on a .40-size electric Mew Gull racer and may follow it up with a .40 size Wedell Williams racer.

A true labor of love, this Fw 190 is a splendid example of fine detailing added piece by piece to present an overall level of craftsmanship not often seen on the RC flightline.