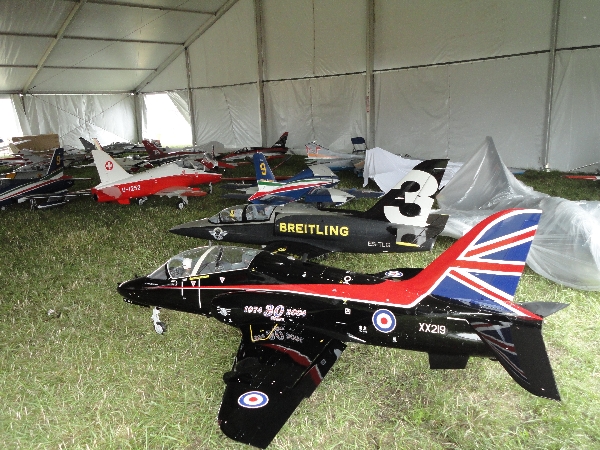 What better place to hold a scale RC plane event than at the U.S. Air Force National Museum? The 9th annual Jet World Masters, held for the first time in the U.S., is the place to be to see world-class scale jets. Teams from 17 countries are here, with scale RC jet-powered planes of all sizes, eras and types.

Every pilot at the event had to first qualify to make his country’s team, and at the Masters each plane is static judged and then flies for the judges three times (lowest score is omitted). During flight judging, only one plane is in the air at a time, which I’m sure greatly helps pilot concentration as well as decreases flightline activity and confusion.

Team USA is comprised of Kim Foster and Scott Harris, both with F-86 Sabres; Bob Bush, with an F-100 Super Sabre; Jason Bauer with an F-15 Eagle; Rod Snyder with an L-39 Albatros; and David Shulman with a MiG 15.

The planes are on site housed in very large, sturdy tents, and we heard that last Sunday, a violent storm that came through Dayton tore down one of these tents. Unfortunately, some people were injured and quite a few planes were damaged; it would seem that all of the planes from the South African team are no longer able to compete.

It’s interesting that many of the jets are much, much larger than ones you normally see at U.S. jet events, and rumor has it that the Russian Yak (which we saw today under a plastic tarp) has a price tag of $400 to $500K!  I hope it takes to the air tomorrow during open flying!