Thursday at Joe Nall was a slippery one.  Rain was the order for most of the day.  With local forecasts calling for 2-4 inches of rain, and possible flash flooding, campers adjacent to the Enoree River at the lower end of the property were wisely moved to higher, safer ground.  The first 11 hours were sloppy and wet with moderate to heavy showers throughout.  All day, pilots eagerly poked their heads out of their campers and tents waiting for a break in the weather.  Finally, around 5:30 in the evening the sun came out, planes began making their way to the flight line, and the sky was busy once again!

One of the first aircraft back in the air was this Avanti S turbine jet piloted by Sebastiano Silvestri.  With patches of  light drizzle still coming down, he displayed its impressive thrust vectored agility to the crowd.  In this shot, Sebastiano hovered the model about 20 ft high just over show center. 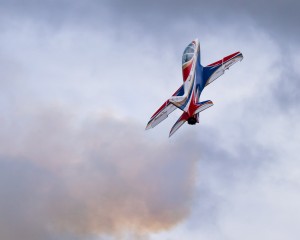 Thursday evening also came alive with a variety of non-flying activities.  The annual AMA meeting took place under shelter (just in case) addressing the state of the business, current issues, and providing a Q&A session for those in attendance.  In keeping with tradition, the meeting was followed by a complimentary dinner for the hungry pilots in attendance. 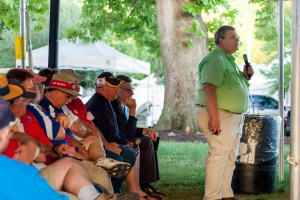 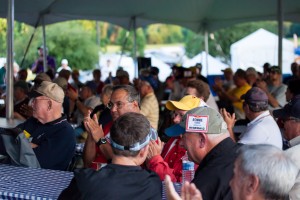 Just down the hill from the AMA meeting, crowds were being entertained by the Nitro Grass bluegrass band featuring two-time national banjo champion Charles Wood who’s been a guest on David Letterman and played with such talent as actor Steve Martin. 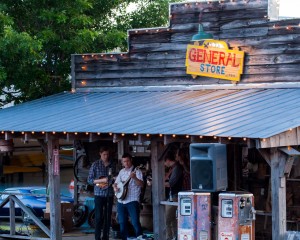 Just before dark, between two and three dozen aircraft were in the air at any one time.  Once the evening light was gone, LED illuminated electric models kept the sky brilliantly adorned far into the night. 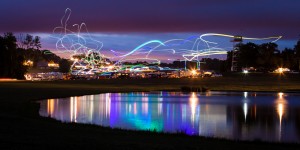 The ground may have been muddy, and the rain may have poured, but Thursday reclaimed itself, and with a perfect forecast for Friday, pilots all around Triple Tree could be seen making last-minute tweaks and repairs for what’s shaping up to be the biggest day of the event. 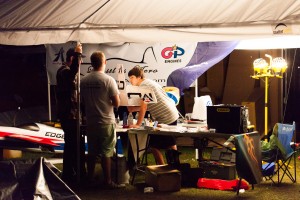