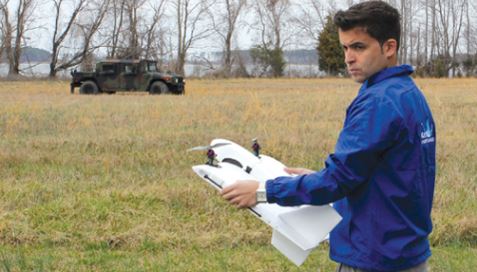 “THE MAIN GOAL IS TO TAKE THE RISK OF A HUMAN LIFE OUT OF THE EQUATION.”

I have always been interested in aviation, even from an early age. In fact, my father taught me how to fly when I was only six years old! I have been flying RC for the past 22 years, and have been involved in competition since the age of 11. I love everything that flies! While my passion has always been aerobatics, I have recently become interested in scale competition as well as turbine jets and helicopters. It’s always fun learning about something different!

What type of UAV do you work on?
John: The aircraft I am mainly involved in is called Skate. It is a 2.2-pound, backpackable UAV aircraft that is designed for quick deployment, and its design is very unique. It is modular; so various components like the camera payload can be changed within a few seconds. For example, one of our pay-loads features three electro-optical cameras while another features an infrared camera (for night operations as well as seeking out hot areas in the terrain) as well as an electro-optical camera (for daylight operations). Also, it features two motors and is flown via thrust vectoring.

The vehicle itself is fairly straightforward to fly. Regarding the takeoff and landing procedure, we have an autonomous take-off and landing feature as well as flying to waypoints in a few different search patterns. Manual takeoff and landings are possible, but are not for the end user. They are done for development purposes only.

What’s your view of civilian UAV/FPV?
John: In recent years, it has been interesting in seeing how many people have become interested in FPV (First Person View) flight. I’ve seen a lot of activity on the RC forum and academic scene alike. I think that it is great to see the amount of time and innovation that comes from this type of interest, but I am a strong advocate of safety and ensuring that those in the States follow the guidelines given by the AMA.

Where do you see drones being used in the near future?
John: I definitely see an increase in the need for drones in dangerous situations. The main goal is to take the risk of a human life out of the equation. For example, a drone can be used for aerial footage to determine certain hotspots in a forest fire, or, can be sent in to see footage a mile in front of a group of travelling soldiers to make sure that the enemy isn’t in their path. There are many different needs for drones, and I can only see their need increase as time goes on.