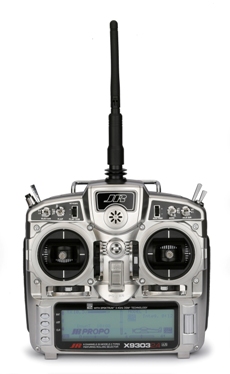 As the foundation for an advanced, full-range, spread spectrum radio, it’s hard to imagine a more ideal candidate than JR’s XP9303.

A breakthrough in versatility and flexibility when it was introduced, the 9-channel, 30-model memory, 3-model type 9303 is an enormously popular radio upgrade for flyers whose skills have outgrown sport-class equipment. With software shaped by the input of top airplane, sailplane and heli pilots, plus its exclusive rolling ease and speed of programming, the 9303 remains the standard by which all 9-channel radios are judged.

And now, with the added convenience and security of Spektrum DSM2 2.4GHz technology, the newly-designated X9303 2.4 is destined to be a breakthrough once more.

Spektrum engineers have even incorporated technology that permits owners of conventional XP9303 radios to transfer all of their model programming data from their transmitters directly to their new X9303 2.4 transmitters.