While attending the big JR Indoor RC Festival last November in Columbus, OH, I witnessed several flights of the JT Models Gee Bee R-1 aircraft. The excellent flight performance of this aircraft inside the large sports dome totally caught my attention. The little Gee Bee R-1 has about 320 square inches of wing area and weighs around 11 ounces when powered by a 50- to 60-watt electric motor and a 2-cell 1300mAh LiPo battery. The plane is constructed entirely from 6mm (1/4 inch) thick medium density foam sheeting. The various parts are all pre-cut and pre-painted (choice of red or blue color scheme). No covering is required, which is a big plus. Every part must be cemented together, so technically this is a kit, not an ARF. But the assembly can be accomplished with only a few hours of work.
Included in the kit are the pre-bent landing gear wires and two pairs of wing support struts (for the wing and landing gear) that are totally functional. Depending when the kit was manufactured, these struts may be wood dowel or carbon-fiber rod (four in all). A round plywood firewall is included with the kit.
You will still need to purchase hinge tape for the control surfaces, control surface hardware (control horns, control rods and EZ connectors), a pair of Du-Bro 1 1/2-inch diameter Mini-Lite wheels (no. 150MW; dubro.com), 1/16-inch-diameter wheel collars (no. 137), foam-friendly CA and accelerator, 5-minute epoxy and Velcro tape to attach the RC system components and battery. The single instruction sheet is brief, but acceptable. The photos included with this review should provide some extra help.
The Gee Bee R-1 is primarily intended for the intermediate or sport flyer. An 60-watt electric motor, like the Axi 2204/54 brushless outrunner (hobby-lobby.com), will provide a lot of flying enjoyment both indoors as well as outdoors in parking lots/backyards in relatively calm winds (under 10mph). Boosting the power to 80 or even 100 watts will provide 3D-type performance. In that regard this plane could prove an excellent transitional trainer to introduce a flyer to the hovering type maneuvers associated with 3D flying.

UNIQUE FEATURES
Four control functions are required, namely aileron, elevator, rudder and motor throttle via an ESC. That means that three small servos are required. Just make sure in the assembly of the various foam pieces that you are using a foam-friendly CA cement, like the Pacer Technology PT-25 ZAP-O Foam Safe Ca and companion accelerator. If you use ordinary CA you could easily melt the foam material. I used 5-minute epoxy to attach the plywood firewall. More epoxy is needed to first cement the landing-gear wires to the foam skirts and then to attach the skirts to the lower portion of the wing. The resulting landing-gear assembles hold up quite well.
Probably the most important item in the assembly of the Gee Bee R-1 is the installation of four carbon-fiber (or wood dowels) supporting struts. The two top struts are each 6 ½ inches long and run from the top of the wing to a point on the upper side of the fuselage. These struts slip into holes that allow you to slightly adjust the length. You want to obtain just a small amount of dihedral in both wing panels. When you have everything adjusted apply some 5-minute epoxy.
Two more struts are required on the bottom of the wing to support the two landing gear skirts. These struts are each 3 ¾ inches long. Make sure both landing-gear skirts hang straight down, before you cement the two lower struts in place.
I made control rods for the elevator and rudder out of Stevens Aero Models yellow Teflon tubing with .032-inch diameter wire running inside the tubing (stevensaero.com). The two tubes were run along the fuselage sides between the servos and the control surfaces. All the control surface hinging was SR Batteries (clear) gapless hinge tape (srbatteries.com). The servos were all attached with their supplied screws and Velcro tape was used to attach the battery pack, receiver and ESC.

CONTROL THROWS & CENTER OF GRAVITY
Oddly enough all three flight controls ended up with the same control throw. The ailerons, elevator and rudder all travel 1/2 inch on either side of neutral. If you wanted more rudder control, you would have to trim a little off the elevator for clearance purposes.
As for CG, 2 inches back from the leading edge of the wing worked better than the recommended 1 1/2 inches back. The 1300mAh (2.9 ounce) battery pack can be easily relocated to adjust the CG to your personal liking.

CONCLUSION
It took about a full day to assemble the Gee Bee R-1 and install all the equipment. If I assembled a second one it would take much less time. Assembly is very straightforward and easy. I do believe that some additional detail in the instruction sheet would prove helpful. This is especially true for a modeler with limited assembly experience.

IN THE AIR
This Gee Bee has mostly been flown from a relatively rough grass flying field. It still gets off the ground quickly despite the lack of a steerable tail wheel. One of the reasons for this is the very light wing loading, combined with more than adequate power. I doubt if the plane taxis more than 15 feet before it is airborne. Also because of the light wing loading the Gee Bee can be slowed down to the point where it is almost hanging on the prop, yet it shows no sign of wanting to stall.

GENERAL FLIGHT PERFORMANCE
Stability. Very stable in flight! Did not require any expo rate control to “soften” the control effects in flight.
Tracking. Once trimmed, the Gee Bee will fly straight and level. Considering that it has practically no dihedral, it does not fall off to the left or right easily.
Aerobatics. You can do most popular maneuvers with ease. The Gee Bee will also allow you the opportunity to try “Harrier type” or hovering maneuvers. If you get serious at this type of flying you would benefit to go to more input power, like upwards of 80 to 100 watts.
Glide and stall Performance. With the CG as indicated, there was no tendency to stall at slow flying speeds.

PILOT DEBRIEFING
Because of the large area of the profile fuselage you will notice that turning the Gee Bee works best when you coordinate some rudder at the time you apply aileron control. Failure to do that can result in a “funny” reverse yaw effect in a turn. I found it helpful to program a small amount of rudder mixing when the ailerons are moved. Most advanced transmitters have provision for this type of mixing and it is worth trying.

HIGHLIGHTS
> Easy to assemble in a short time.
> Can be flown indoors as well as parking lots and backyards
> Excellent way to learn to hover and fly 3D type maneuvers.
> Can accept a variety of power systems depending on the pilot’s skill level 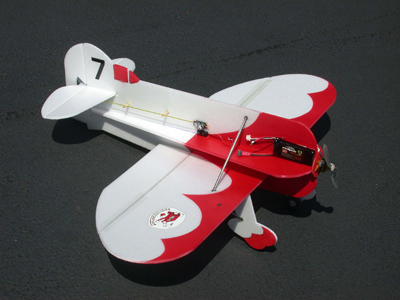 The JT Models Gee Bee R-1 racer as a profile fuselage parking lot/indoor RC flyer. Plane is available with a choice of red or blue trim. 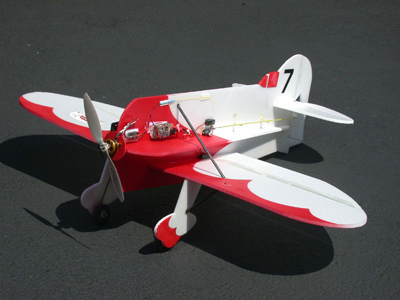 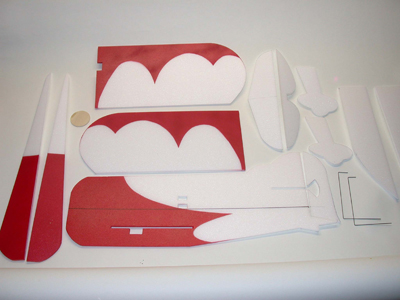 These are the pre-painted foam parts that come with the kit. Make sure you use foam friendly CA cement and accelerator for the assembly process. 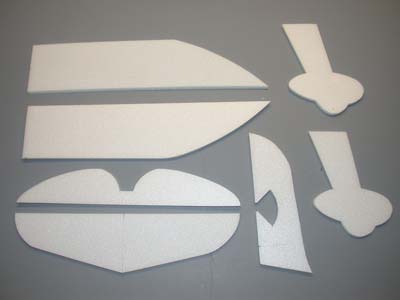 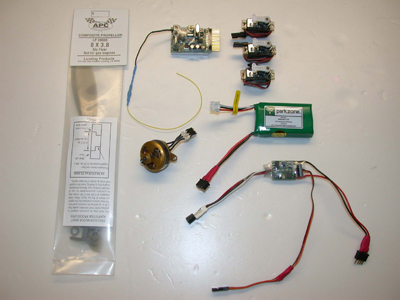 The power and RC system components used on the Gee Bee R-1. The green jacket Li-Poly battery pack was later replaced by a 2.9 ounce battery to help balance the plane properly. The original pack made the plane tail heavy. 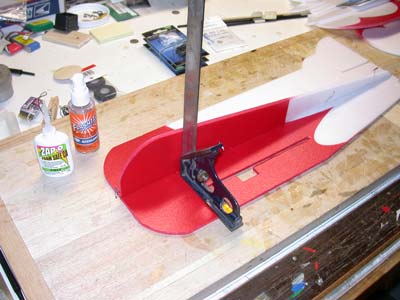 Constructions starts with the profile fuselage that consists of three separate pieces. Combination Square helps keep everything in alignment. 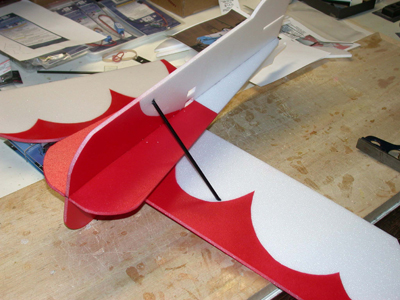 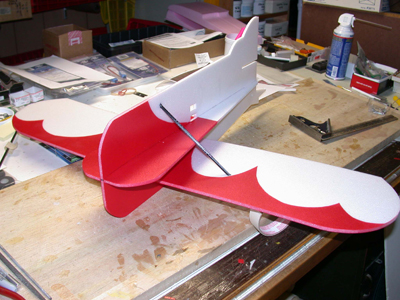 Wing has been added along with one of the two top wing struts that helps brace the wing. 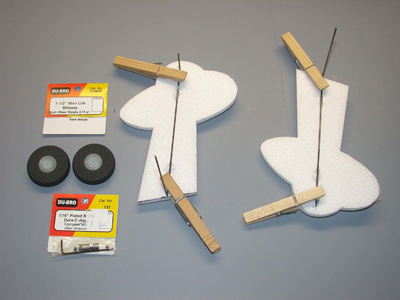 Preformed landing gear wire is epoxied to the foam landing-gear skirts. I bought this pair of Du-Bro 1 ½ inch diameter Mini-Wheels. 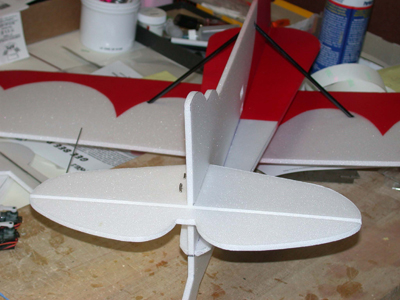 The foam tail feathers in position. 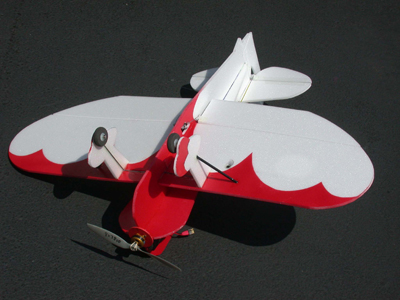 Underside of the Gee Bee showing the lower wing struts that brace the landing gear and skirts. 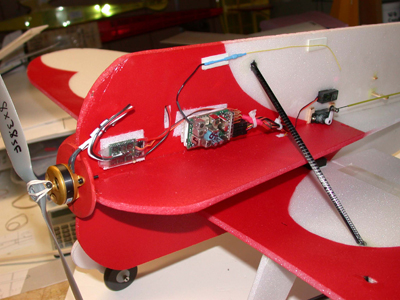 The left side of the profile fuselage showing the motor, then moving rearward the Castle Creations ESC, the FMA receiver and then the rudder and elevator servos. 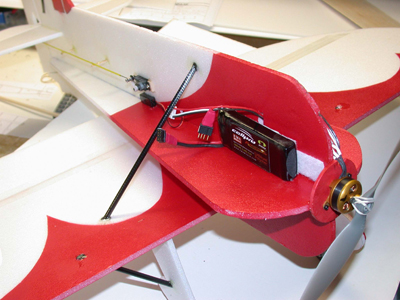 The right side of the fuselage with the battery shown in the final position that achieved the correct center of gravity. The aileron servo is on the bottom side of the wing, toward the trailing edge.