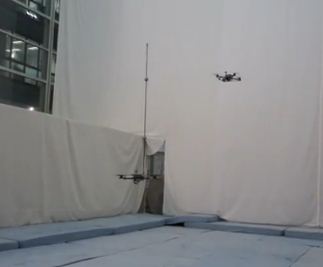 We might take it for granted when we play games like ping pong or tennis, but what about a Quadcopters UAV that can do the same thing? Interesting? Read on! 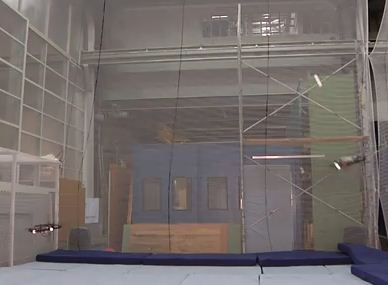 From Krulwich Wonders by Robert Krulwich

Imagine a “plates,” like a dinner plate, hovering mid-air. The technical name for this gizmo is a Quadrocopter. But what it’s about to do is something you might see at the circus. So in comes the man with the top hat, (me) saying “Ladies and Gentlemen. Hold on to your seats, Prepare to be astonished!”

Then this happens: Let’s take a pole, basically a three foot stick, and fling it at the plate. What are the chances that we could get the “plates” to zoom under the pole, catch it mid-air, (remember, it’s got no arms, it’s a plate!) and balance it upright? Oh, and the plate isn’t being guided by a person. It’s got to do this by itself. It has to learn this, through trial and error.

That would be one very, very, very talented plate. And now before your very eyes, I’m going to show you one, designed by a grad student working in Switzerland, Dario Brescianini. He studies artificial intelligence at ETH Zurich’s Institute for Dynamic Systems and Control, where they design clever robots. In recent years, the students there have been building these simple, dinner-plate thingies that fly. Plates with propellers. Often referred to in the RC industry as Quadcopters!

Last year some students in Zurich taught these “plates” to toss a rubber ball, which was a little surprising. Then they got the plates to “catch” the ball and ricochet it back and forth; they call this mid-air “juggling.” I’d call it “pingpong,” but whatever you call it, it was very impressive, as you can see here …

And then along comes Dario.

As I said, he tossed poles (with shock absorbers — a balloon filled with flour at one end) at his robots, hoping the plates could catch, balance, then juggle these flying sticks. Impossible? No. Dario, quoted on a AI site called Robohub, said he found the problem “interesting” because it combined various areas of current research and many complex questions had to be answered: How can the pole be launched off the Quadrocopter? Where should it be caught and — more importantly — when? What happens at impact? The biggest challenge to get the system running was the catching part.

I’ll say. But, as you’re about to see, he did it. Dario gave the machine physics lessons, but it took trial and error for the robots to figure out the timing. I find this totally amazing.

One more thing — Some of you are going to say this was Photoshopped, or it’s all a trick. I don’t think so. Dario worked with fellow grad student Markus Hehn and Professor Raffaello D’Andrea, artificial intelligence scholars with impressive resumes. The school is well-known. If this video is a slick prank, they would have chosen a slicker narrator. Dario (if that is Dario) reads his copy like an embarrassed announcer at a funeral. He will never get a job in broadcasting, but that’s no problem, because he’s aces with flying poles.

We can’t imagine what’s next!