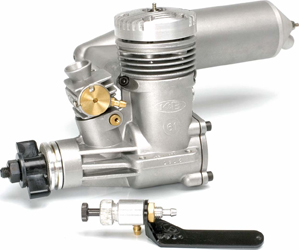 I’ve been selling, servicing and repairing model engines for close to 50 years. During that time, I have come across quite a few strange engine-related problems, but I recently came across one that I think I should share with you all because it was definitely a first for me. I had one of my Custom K&B 61s for servicing, and it had been out of use for a while. When the owner decided to use the engine again, it flamed out after takeoff, and his aircraft was slightly damaged. Thinking that there must be a problem with the engine, he sent it back to me. Needless to say, guys, if an engine dies unexpectedly, it is usually fuel-system related, i.e., foreign matter in the fuel clogs the carburetor; there’s a hole or split in the fuel line or pick-up line in the tank; something is blocking the muffler pressure line so that the tank can’t vent, etc. I disassembled the engine but didn’t see any particular problem other than that the engine had been run lean at some time (there was a little piston scuffing that had varnished over). I checked the carburetor for foreign matter but didn’t find any, but I did find that the high-speed needle valve only opened ? to turn. This was puzzling, as at this setting, the engine shouldn’t even have run. Perhaps the owner had turned the needle in, but if he had, why? Thinking that the root of the problem was probably in the fuel system, I cleaned and reassembled the engine and soaked the muffler in hot water and detergent to clean off the goop buildup. While drying the muffler with the compressed air gun, I discovered the cause of the problem. I blew through the manifold, and only a little air exited the tailpipe. Further examination revealed a wad of cloth jammed tightly halfway inside the tailpipe. Evidently, the owner had plugged the tailpipe to prevent oil from dripping out, but we have no way of knowing how it got jammed halfway in. As I write this, my note to the owner explaining the problem and the service charges is still unanswered. The plugged tailpipe explained the almost closed needle valve; the high backpressure it caused had increased the tank pressure, and in turn, this fed the fuel under pressure to the carburetor. This muffler restriction probably also affected the engine’s top end, but the owner didn’t mention this. So the lessons here are:

If an engine has been out of use for a while, always check the exhaust and intake for plugs before you run it.

Whenever you have to turn the high-speed needle valve more than one turn from its usual setting, there’s something wrong. Find out what’s wrong before you attempt to fly the aircraft.