Go to any AMA club field and I bet that you’ll see a bunch of foam models, I know that my club has its fair share of them. To me, molded foam has become the new balsa, and for good reason. Foam planes are easy to assemble, fly well and are easy to repair when you have that oops! But what if you could minimize damage from that unexpected meeting with terra firma? 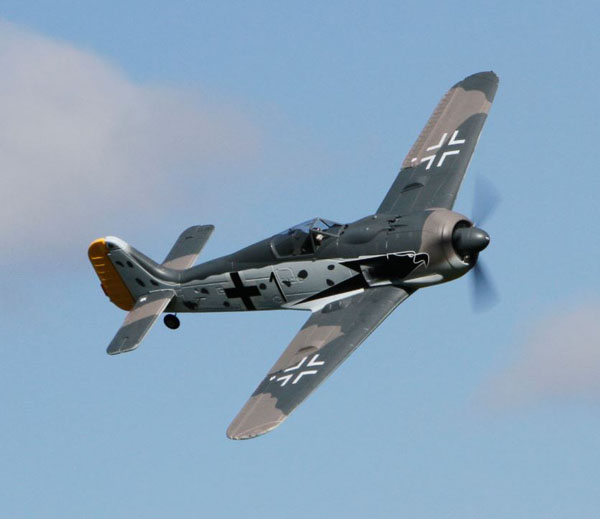 Well Killer Planes has come up with a solution that lets you laugh your crash off! How do they do this you ask? Well, it’s really simple, in fact it’s so simple you’ll wonder why someone didn’t think of this sooner. The secret is the addition of strategic placement of carbon fiber rods of various lengths and diameters throughout the airframe. Killer Planes call this crashproofing – Crash Damage Resistant Technology (CDRT). While there isn’t a totally crash proof plane out there, Killer Planes CDRT will help to minimize damage by the installation of one of their “crash-resistant reinforcement kits”. Let’s take a closer look.

For this review, I received the new TopRC 1200mm span FW-190 “Butcher Bird”. This model has a lot going for it such as retracts, sequential gear doors, flaps, lights, prop-mounted motor cooling fan and lots of cool detailing, given how great this model looks, I thought it was a great choice for crashproofing. 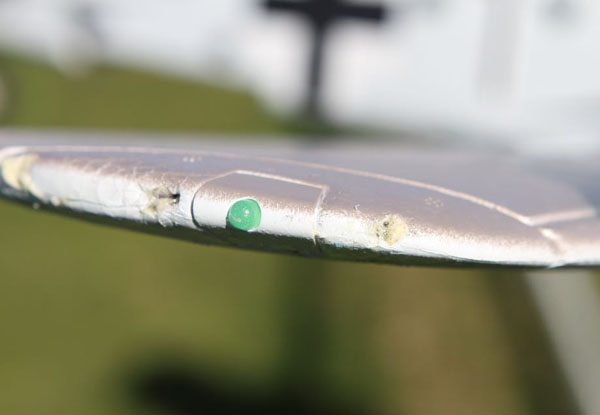 So, what does a crash kit include? A whole lot of carbon fiber rods, tubes and a set of instructions. Because the kits are designed for individual planes, each kits’ content will vary the number of rods, tubes, bars and plastic plates. The TopRC FW-190 crash kit had over 30 carbon fiber rods and tubes added to it, I was amazed at the amount of reinforcement that could be added and no area was overlooked. Rods were added to the wing, ailerons, horizontal stab, elevators, vertical fin, rudder and of course the fuselage. Whew! That was a lot more than I expected.

There is one more important item that has to be mentioned, is that all of the holes needed for the reinforcement rods are drilled by Killer Planes! This alone is worth the price of admission as the holes were accurately drilled the length of fuselage, wing panels and in all of the other parts that was to receive reinforcement. Not an easy task! If you’re not handy at drilling long holes or installing a crashproof kit, Killer Planes will install the kit for you and touch-up paint any areas that were drilled. Killer Planes also offers different levels of reinforcement from MAX Crashproofing to SUPERMAX Crashproofing. If you’re handy drilling long holes in foam, you can also purchase drill rods of varying lengths and diameters and also the reinforcement parts separately for your particular plane. 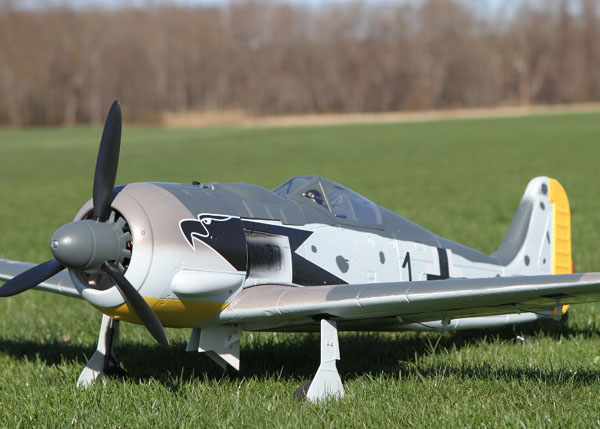 Looking over the plane and the number of rods and tubes to be installed at first seemed intimidating, but as I got going, the job went pretty smoothly. One big help was that the rods and tubes were dry installed into their respective holes. This totally eliminated any guess work of what went where. Recommended glues to use are Gorilla Glue, Hotglue and contact cement, I used Gorilla Glue throughout.

After reading through the instructions and gathering the needed supplies, which consisted of some newspaper to spread over my work area, Gorilla Glue, a spray bottle of water, paper towels and latex gloves I was ready to go. One neat thing Killer Planes included was a very thin carbon fiber rod that they call a “Glue Application Rod” (GAR). Killer Planes has several videos on YouTube and one of them was how to use the GAR, I was impressed that it actually worked very well for getting glue deep into the holes for the rods. After all, if you can’t get the glue in the entire length of the hole, the reinforcement rod can’t properly do its job. 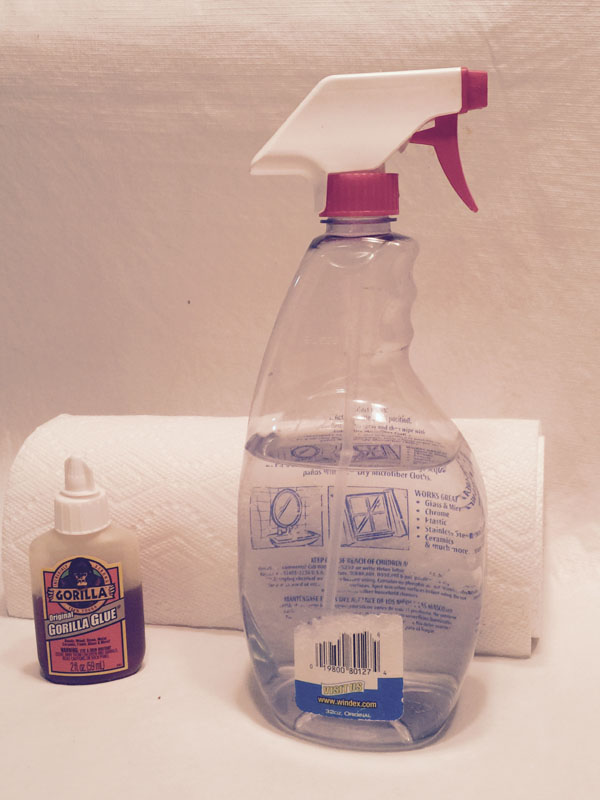 I started with the stabilizer as it had only 4 rods to install, 1 in each elevator and one in each stabilizer half. I removed one rod at a time and glued it in place before moving on to the next rod, this eliminated gluing a rod in the wrong hole. I first squeezed some glue into the appropriate hole and worked it with the GAR, then as I learned in the GAR video, I applied glue to the GAR and worked it into the hole until I was satisfied that there was complete coverage. Next, I smeared some glue onto the reinforcement rod and then sprayed the rod with water to activate the glue. To ensure complete coverage, I slid the rod in and out a few times and wiping away any excess glue that oozed out of the hole with a paper towel. Don’t forget to wear your latex gloves as handling a glue-covered rod can be a messy task. One of the unique properties of Gorilla Glue is that expands as it cures making for a very secure bond, but this property also means that glue will ooze out both ends of the holes as it cures, which needs to be wiped away occasionally. If you don’t you could accidently glue a control surface in place. You also need to make sure that the reinforcement rod doesn’t extend beyond the inboard end of the control surface. 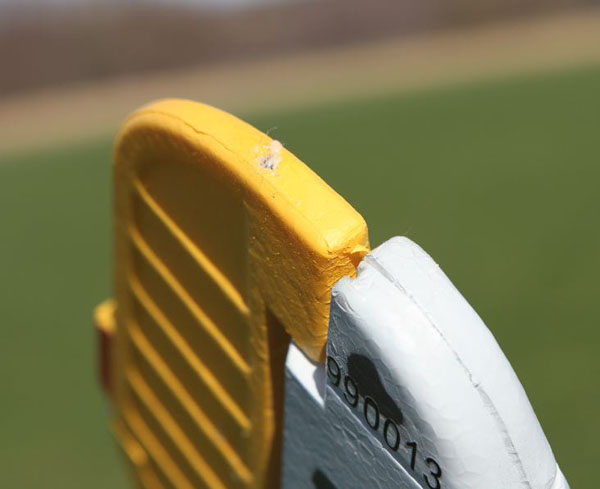 For the rest of the model, I followed this process and it worked well. Overall it took about 3 hours to install all of the rods. The only place that I had some questions about were the rods that extended from the firewall forward into the cowl. I made the assumption that they were to be cut flush with the firewall, well, you know what they say about assumptions. After I cut them flush, I found a reference that said the rods that were inserted into tubes, were to be adjusted touch the inside of the cowl at the nose to prevent the cowl from being pushed into the fuselage. After letting the parts sit for 24 hours to cure, I did some twisting and flexing of the parts and was impressed on how stiff and immobile they were. To complete the plane, I followed the instruction manual and didn’t encounter any problems. 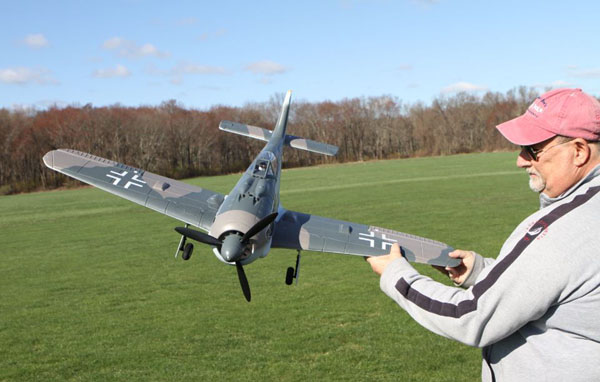 (Above) You can’t do this to a normal foamy warbird, the wing panel will definitely  flex and bend.

While we didn’t crash the plane, I feel that the reinforcement kit will greatly minimize any crash damage if it occurs. The kit was easy to install and all of the required holes were accurately drilled, which I found to be amazing! I thought the time required to install the reinforcement kit was very reasonable, especially when working with Gorilla Glue. I also liked the more solid feel of the plane in flight. You could tell the airframe wasn’t flexing nearly as much and this made for more positive control responses. I feel the Killer Plane reinforcement kits are a worthwhile investment to keep you flying! 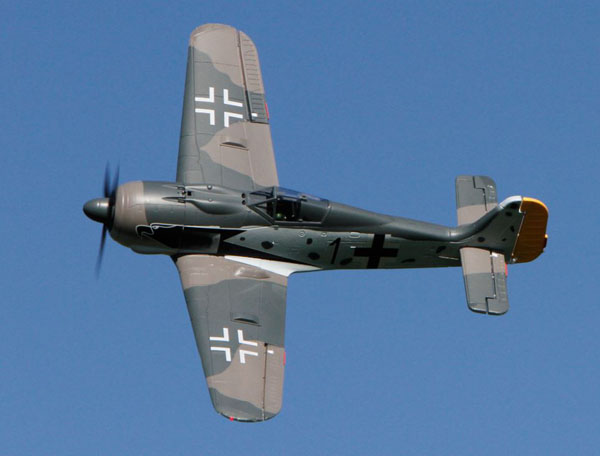 A foam warbird with a 1200mm wingspan is a very popular size, as such I’ve had a lot of opportunities to fly a lot of them. One thing that stands out is while they fly well, a lot of them have a “soft” feel to them. To me, some of this is the foam airframe flexing and absorbing some of the loads that a balsa or composite model tends to deflect, thus giving a foam model that soft feel. Also with the addition of the reinforcement kit, there is a little weight gain (which is minimal), which contributes to a more of a warbird feel to the model.

Flying the FW-190 was a pleasant surprise. First off, there was concern that with its small wheels, the plane would have difficulties getting off out thick grass runway. Nothing could be further from the truth as the plane leaped off the ground after a run of about ten feet. Once in the air, I made a couple of trim passes. What was immediately apparent was that the control response to the ailerons and elevator were greatly improved making the plane groove very nicely. I liked the overall big model feel the reinforcements made. 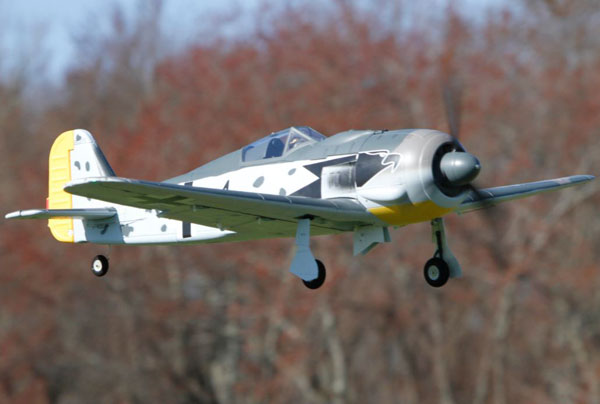 While I can’t make any claims about the model being crashproof, I can say that due our grass runway and small wheels on the plane, when landing, it did flop over rather suddenly when it touched down. Just about all of my foamies that have landed this way, have crushed either the rudder or fin or both. In this case with the reinforcements that were installed in the rudder and fin, there wasn’t a scratch in the paint or any crushing of the top the rudder/fin. I was beginning to see the logic to adding the reinforcements.