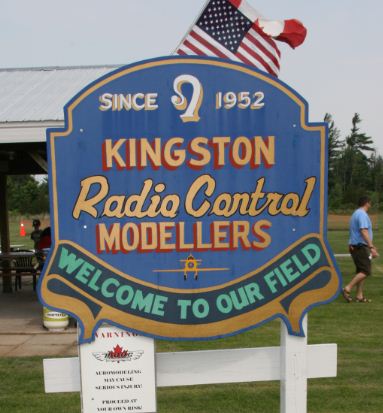 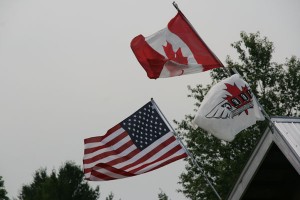 You can’t give you dad a better gift than a trip to this Canadian Field of Fun!

Wow 36 years!  This event over the decades has seen it all ups and downs in attendance and everything from being totally washed out or blown out but this year was nothing short of heavenly with sunshine and light winds with temperatures that were best described as “Goldilocks” just right!  This year also set a record for attendance with 61 registered pilots this was largely imparts to the “Turnbuckle” a laser cut short kits being produced by Rolly Siemonsen.  Everywhere I looked I saw Turnbuckles in every color along with its smaller sized “Mini-Buckle”.  A good 1/3 of all those models were electric powered.  After 36 years it’s the Turnbuckle that keeps coming back.  It’s actually better than a “Timex” most would say.  Rolly started last year producing kits and sold about 80 since last year and he easily sold 20 more during this year’s event.

I’ve been a long-time past member of the Kingston RC Club and never fail to attend.  Mainly I love the challenge of pushing myself to perform precisely plus I get a chance to get caught up on news with my old Kingston buddies.  Lots of people camp out on site with campers and tents.  Many families have travelling great distances and I found one family that came up from Toledo Ohio.  For many families it’s the event has become a traditional part of their summer. Some have been coming so long that the Grand-Children are starting too take on Dad or even Grand-Dad – The event is firmly set in stone always held on the Father’s Day weekend and on the Sunday morning you get to see the young kids giving card/gifts just for Dad.

The pure fun of flying competition fun/fly is different for everyone but the died-in-the-wool more serious players would say if you didn’t bend or break the plane during the weekend your no real threat.  Depending on your skill level or age Junior is mainly for the kids, Sportsman for the not so serious flyers and Expert for the seriously good flyers. Winning First place in Junior or Sportsman will instantly get your elevated too the next higher level.  Winning Expert only makes you God for the year and you’re likely buying a round of beer for your buddies.  Luck you really need some!  Cross Wind? Engine running good? You might even be extremely unlucky enough to have a mid-air as the Kingston field has 2 contest circles running simultaneously.  They do this to help speed pilots through each round.  Dan Luchaco had one but was lucky enough to only slightly bend the top of his rudder.  This was easily fixed.  In fact Dan’s luck was so good that weekend he was latter deemed God for a year winning 1st place in Expert.

The list of events changes slightly from year to year but basically your asked to do 3 task the first 2 normally some combinations or rolls, loops, touch-n-goes, spot landings etc.  The events that give most people trouble are the bomb drops.  Most people watch the bomb fall not the plane.  And the hardest for me is the Can-Can a 60ft length of fishing line is attached to an alum beer can.  To get the points it the beer can that’s got to touch down in the target circles.  At 60ft you most definitely can’t watch both.  Some like me make a landing pass long past the circles and pull up just short of touching down if you’re lucky the can will touch down in the circle.  The hot pilots go slow over the circles and do a quick 180 and fly off quickly the can on the string will fall vertically and touch in the circles due to the slack in line.  It’s very easy to stall out the model doing this 180 turn and crash the plane.  This year the Expert guys had the option of doing the last Can-Can pass inverted for bonus points.  Lots of the guys in Expert did give the inverted pass a try.

I spotted a young guy 14 year old Justin Luvesque with a Turnbuckle in hand and it was finished in traditional Rolly Siemonsen orange I asked if he built that?  He said “Rolly gave it to me after it got damaged in last year’s event.”  So here he was at his first contest flying a Turnbuckle.  He said he was still shaking even after flew his first round.  The Kingston club knows from experience that the Fun/Fly competition is not for everyone and have deemed open flying time when theirs a break in the action or during meals.  This lets all those who have been watching get in some stick time during the weekend so everyone is satisfied.  By Sunday afternoon everyone is ready to go and the last task for the Event Director Mike Siemonsen is announcing the winners.

You will find more information on Turnbuckles on the Kingston Radio Control Club website: www.krcm.org