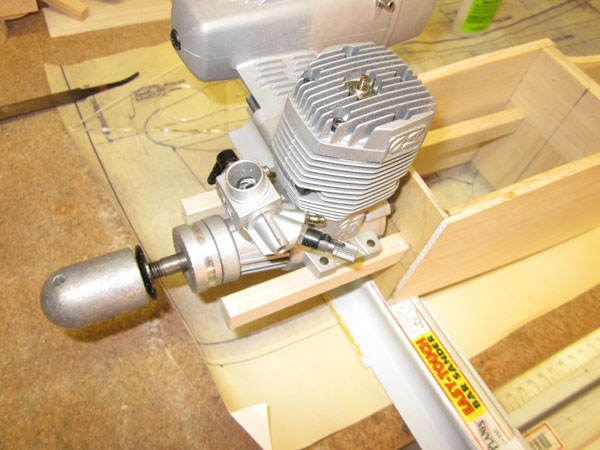 So, after wrapping up the wing and ailerons, lets move on to the fuselage. Really this is little more than a long tapering box structure and again, like the wing, not all that complicated or hard to do. You first should have your radio gear and engine and fuel system as you’ll be building the fuselage to fit.

Start by grabbing all the parts and lay them out over the plans to make sure you have everything you need. This includes the fuselage sides and doubler sheets, the firewall and bulkheads, and the stringers and hardwood landing gear blocks. 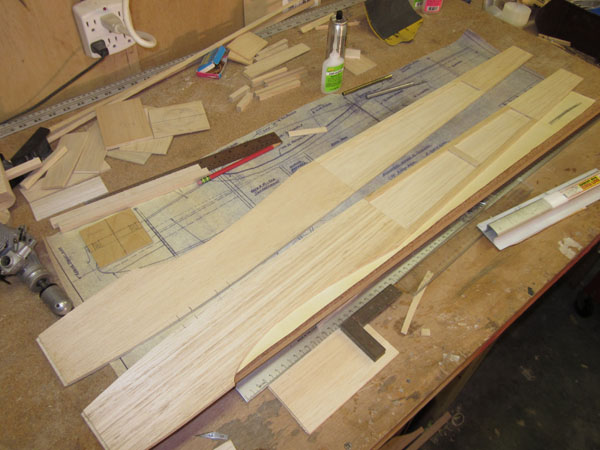 Important note here. Be sure to lay out the fuselage sides so they are mirror images of each other. Too many kits have begun with two left or right sides and that will just ruin your day! Mark the position of the stringers and doublers and then glue the doublers in place so you have the sides as shown. Have the wing saddle sections facing outward from each other and you’ll be all set. 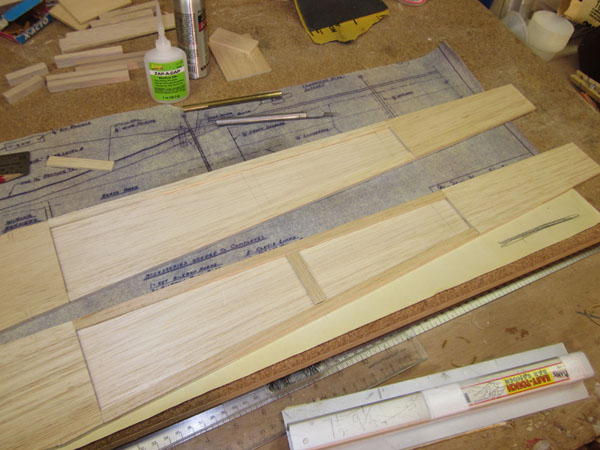 Here you see the balsa upright (one for each side) added mid-way between the forward and aft doublers. This is where the former 7 will go centered over the upright. I use Medium Zap CA throughout construction except where noted. 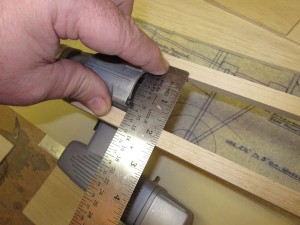 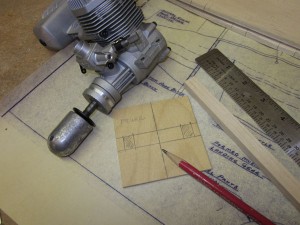 You have to install the hardwood motor mount rails to fit the width of your engine. I simply place the rails on top of my engine’s mount lugs and then measure the distance between the inner edges of the rails. I then transfer the width to the firewall (F1) and then draw the 1/2×3/8 inch openings that have to be cut into the firewall. You can see here that the layout is pretty simple. The plane comes with the top reference line (engine centerline,) already marked for you. 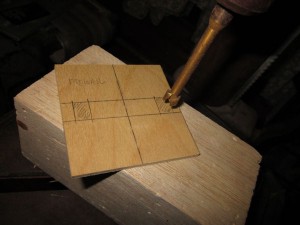 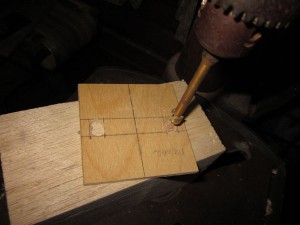 To cut out the enclosed openings in the firewall and other bulkheads, I use a circular end-cutting bit to remove the majority of the material within the guide lines. 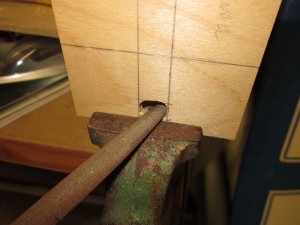 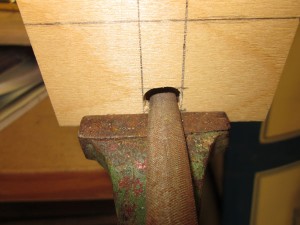 Now place the firewall in a vice and use a coarse-cut file to enlarge and square off the opening in the material. Take your time and do a neat job. 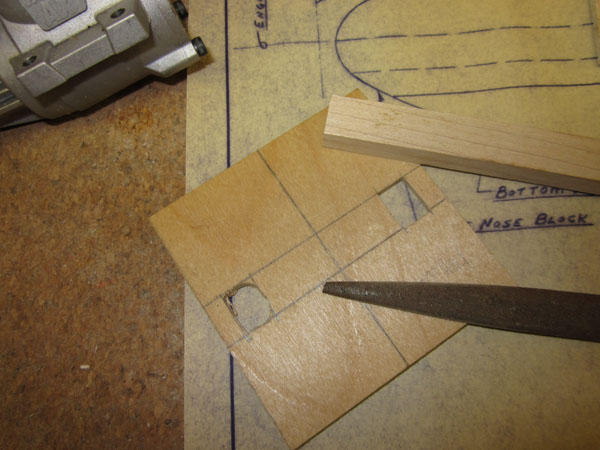 When you get close to the lines, slow down and use the hardwood rail often as a gauge to check the size and fit of the openings. You want a nice snug (not tight,) fit. Too tight a fit will squeeze the adhesive out when you slide the pieces together. Use epoxy here, not CA glue. CA is quicker, but is not as resilient to the engine vibration. 15- or 20-minute epoxy works best. 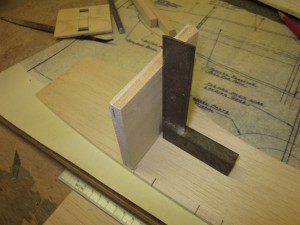 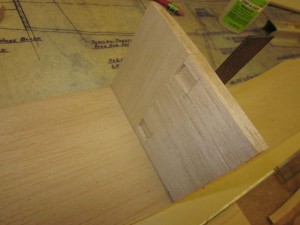 Start assembling the fuselage by tack gluing in the F-4/F-5 formers to the side. These are liminated together to form a thick bulkhead. Notice the openings in the front side. This is where the aft ends of the motor mount rails will be imbedded. They too have to be cut to match the engine width. 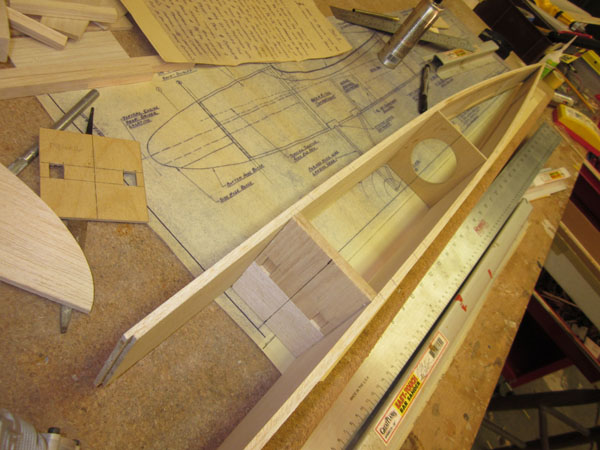 Next Tack glue in former F6 (shown with large opening cut into it), and then pin the sides upright over a straight reference line and make sure the centerlines on each former are aligned with a reference drawn on the plans. When the fuselage is straight and the sides are pinned in place to the board, pull the tail ends together and align it centered over the reference line as well. You will have to sand a taper the inner aft doublers at the tail about an inch wide so the ends mate evenly over the centerline. When everything is all straight and even, tack glue everything in place to lock in the structure’s shape. 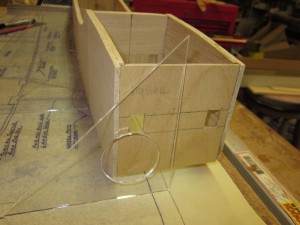 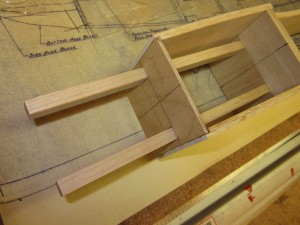 Double check the centerline alignment of the fuselage and glue the firewall into place. Confirm it’s alignment with some squares. When it is properly aligned, glue it in place with epoxy. Let the glue dry and then slide in the engine rails as shown. The aft ends go into the openings in the laminated F-4/F-5 bulkhead. Use Epoxy and let setup overnight. 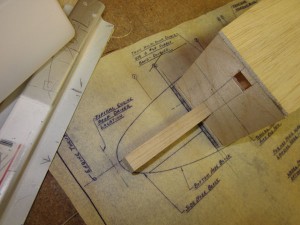 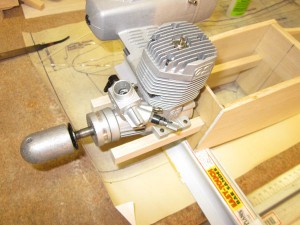 When the glue has cured, remove the fuselage from the building beard and check its alignment with the side-view on the plans. Everything should line up properly including the angle of the engine down-thrust on the rails.  (Here only one rail is in place to check alignment.) Here you see how nice the engine fits into place. Do not drill or install the engine yet. 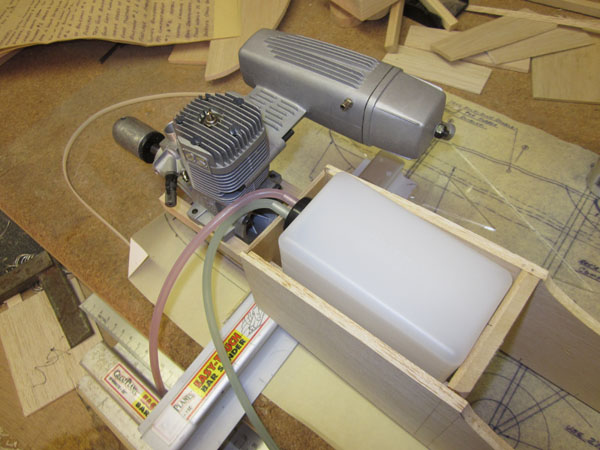 Here I am checking the fit of an 11oz. fuel tank from Hangar 9. It is a little too long and I will replace it with a Du-Bro or Sullivan 10oz. tank to make room for the wing hold-down dowel in front of the F4/F5 former bulkhead.

That’s it for tonight! Come back soon and check out the progress as we finish up the fuselage. If you want to see the Video portion of the build featured in the Members Only section, go to www.airagestore.com to subscribe.