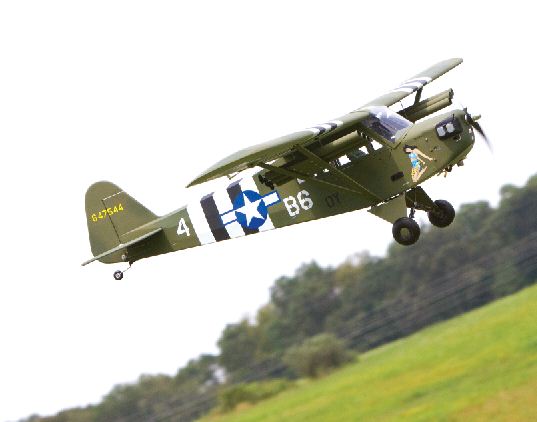 This Exclusive Sneak Peek will be published in the February 2012 issue of Model Airplane News. Reviewer and Test Pilot Aaron Ham, reports that: “makes a great trainer thatr just happens to be legal for warbird events–A J-3 Cub in military dress.”

Built between 1937 and 1947 by Piper Aircraft. The Piper Cub was a tandem 2-seater (fore and aft) seating, it was intended for flight training. It quickly became one of the most popular and best-known light aircraft of all time. The Cub’s simplicity, affordability and popularity brought about comparisons to the Ford Model-T in the automobile sector.

It was the start of WW2 in Europe and the realization that the U.S. would soon be drawn in the war that prompted the creation of the Civilian Pilot Training Program (CPTP) and the Piper J-3 Cub became the primary CPTP trainer aircraft. Wartime demands soon increased that production rate to one Cub being built every 20 minutes and really put the J3 Cub on the map By war’s end, 80 percent of all US military pilots had their initial flight training in Piper Cubs. Powered by a Continental A65 four-cylinder engine and painted olive drab, the L-4 Grasshoppper was essence a J3 Cub in disguise as it was a modified version used for forward scouting and observation roles.

Constructed of light ply and balsa, this IMAA-legal L-4 Grasshopper from Kondor Model Products is a simple semi-scale version of an aircraft operated by Denmark Airline Captain Thomas S. Damm.  It is expertly covered and painted at the factory in an authentic flat olive drab finish and has a great overall finish.  Included in the kit is a generous assortment of quality hardware, clear plastic windows, a painted fiberglass cowl, aluminum wing tubes, rubber wheels with covers and a nice articulating landing gear.

The control surfaces use CA fiber hinges and the aileron servo covers and mounting posts are one piece and molded in plastic.  I really like this idea but did need to trim the insides of the plastic posts to get the servos to fit flush.  The use of 24 inch extensions will also be needed for the aileron servos. 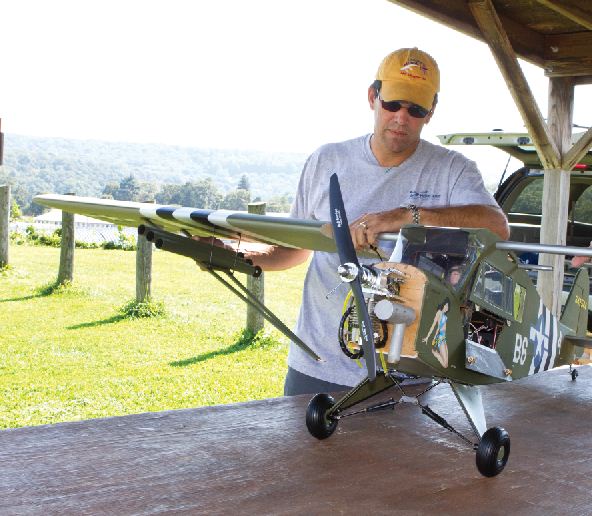 The pushrods for each of the control surfaces use retainers on one end and adjustable clevises on the other.  I added a small dab of white paint on the retainer screw to mark where it touched the pushrod.  I then carefully used a dremel tool to make a small flat spot in the rod. This along with some thread lock adds security to the linkage attachment.

There are guide tubes pre-glued in the fuselage for the elevator and rudder pushrods but they were glued incorrectly. The two center guide tubes should be for the pull-pull rudder cables and exit near the bottom of the fuselage but instead exited up near the horizontal stab.  The easy solution was to modify the set up and use the center servo location on the tray for the elevator and the outside location for the rudder. Then, I used a long pushrod for each. This option will not hurt anything and still allows the control surfaces to function normally. 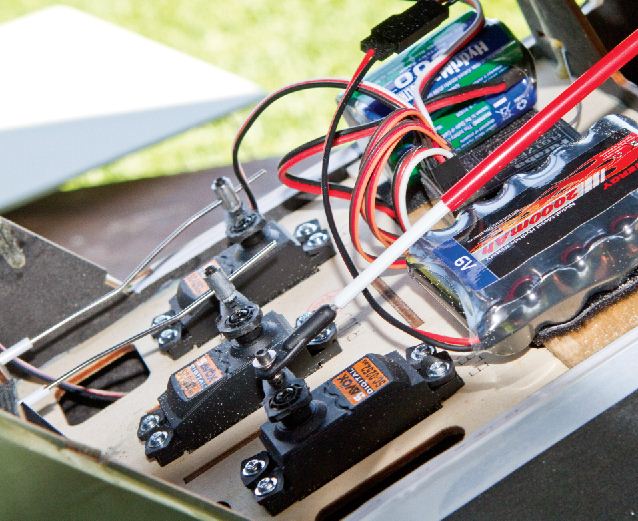 To give the classic L4 good flight performance and response, I used the SC 0252MG servos from Savox USA. With their dual ball bearing support, metal gears and whopping 100oz. of torque (4.8V) and 145oz. of torque (with 6Volts,) these servos are a bit of overkill but they are standard size and fit nicely into place.  I never had to worry about any lag in response or control surface flutter cause by ordinary servos. since I started using these servos I have come to learn that not only do they provide great power at very reasonable pricing, but they are also “Green” and are all environmentally friendly. That’s great. 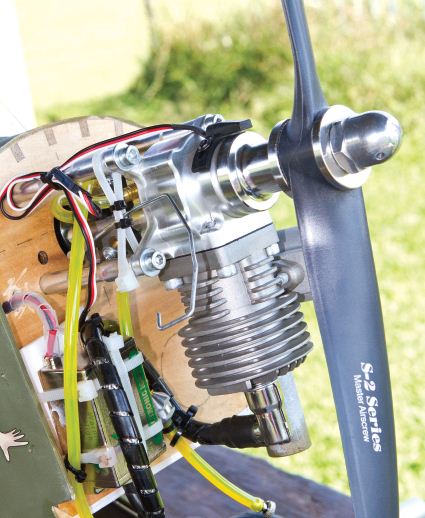 For power, I used the Aerovate 15cc gas engine also distributed by KMP. It was more than enough power to fly the L-4.  If using this engine, check the gap of the plug and set it to 0.012 inch and be sure to use only a 4.8 volt battery pack for the ignition.

I like to consider the L-4 a great trainer airplane for the beginner.  It has a very light wing loading, flies comfortably slow and stable at 1/3 throttle and really teaches anyone who flies them to use both thumbs. The kit itself is a bit more labor intensive than some ARFs but the small amount of effort really pays off in the end. It looks great, flies extremely well and is something different—A J-3 Cub in military dress.

Although the L-4 is green and has rocket tubes, it is still a Cub and it flies great.  The wheels are plenty big for any grass field and has easy ground handling.  I chose to add 30% expo to rudder prior to takeoff. The first test flight was perfect.  With the Aerovate 15cc pulling out front, it was as if I was flying an original Cub with a A65 Continental.  The tail comes up within 6 feet and the lift off is picture perfect. It has a steady climb rate and the wings remain level just like a trainer. Turns really teach you to use both thumbs. Regardless of the direction of the turn, rudder is needed to counter adverse yaw and keep the nose coming around. Normal flying is fun and relaxing provided you abide by this simple rule. Landings are a blast.  The L-4 will slow to a snail’s pace with just a small amount of headwind.  If there is a crosswind, the L-4 likes to point itself into the wind. If it is not parallel to the runway, use rudder and opposite aileron to keep it straight.

Stability – Trainer-like. A Cub is a Cub, and a Cub is stable! Enough said.

Tracking – Other than minor trim adjustments, the L-4 tracks straight and true at moderate power settings. Takeoffs required normal right rudder but cruising along at half-throttle, the two clicks of right rudder were perfect.

Aerobatics – Although the L-4 is not meant to be aerobatic, rolls, loops and stall turns are easily accomplished. Dive to gain speed and slowly add control input. Be smooth and the model performs nicely. Cut power on the back side of the loops. There’s plenty of elevator and rudder for nice barrel rolls. Spins too are easy to get into and recover from.

Glide & Stall Performance – It was rather difficult to get the L-4 to stall – especially flying into the wind. When it did finally stall it tended to fall off to the left. Glide performance of the Grasshopper is exceptional.  With a very light wing loading you expect it to have a great glide ratio, just keep the nose down.

The L-4 Grasshopper from Kondor Model Products is a lot of fun. It is a perfect airplane to use as a trainer, cruise around as an everyday flyer or grab a stool on the flightline and practice takeoff and landings.  It also has the added benefit of being an IMAA legal Warbird so you can fly with confidence that you won’t be out of place at a local meet or fly in like the Warbirds over Delaware.