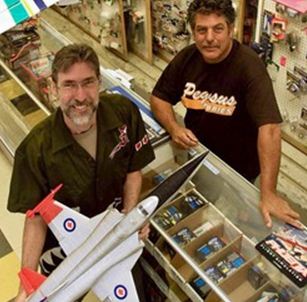 First came the story about Top Gun in the Wall Street Journal (click here to read that post), and now the LA Times has a story about RC electric planes! It’s great to see the sport getting so much positive attention in mainstream media. Here’s the full story by Cyndia Zwahlen, posted June 6, 2011. 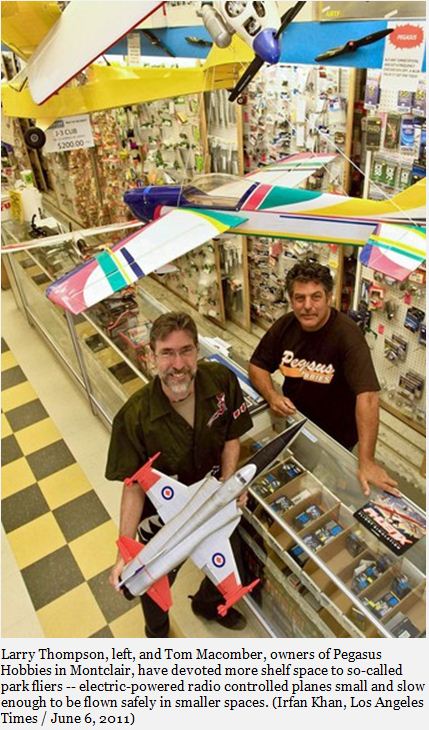 When Greg Stone flies his model airplanes in Irvine at Orange County Great Park — fittingly on the site of the former El Toro Marine Corps Air Station — he’s surrounded by the buzz of the tiny electric motors that power his planes and those of fellow hobbyists.

It’s a sharp contrast to when fuel-powered model planes — which were much louder, as well as faster than the electric models — dominated the hobby.

“It’s a shift I made in the last two years,” said Stone, president of the Orange Coast Radio Control Club and a veteran model aviator. “And we have been seeing more families, more youths, everybody, getting into it.”

Fuel-powered planes, including gasoline, nitro and even jet-fueled models, still have many devoted followers. But demand for the cleaner and quieter electric planes, which are called park fliers, has grown.

Businesses that sell the planes and parts hope that it will provide a boost to the long-stagnant hobby.

“Most of what we are selling is electric,” said Larry Thompson, who employs 20 people at the Pegasus Hobbies store in Montclair.

A few years ago, park fliers accounted for “30% of sales, but now it’s closer to 70%,” said Robert Holick, the new owner of Landing Products Inc. in Woodland, Calif. His five-person company has made the well-known Advance Precision Composites model airplane propellers since 1989.

The small park fliers are easier to fly because they can go slower, without sacrificing maneuverability, he said. Innovations in materials, including bodies made of newer, sturdier foam and fast-drying glues, have made them easier and less expensive to fix.

Lower costs and better performance have also been brought about by advances in the motors and electronic controls for the planes.

So far, it’s unclear whether the park fliers are going to help businesses soar.

Attendance at a recent consumer show in Ontario sponsored by the Academy of Model Aeronautics was 5,200, spokesman Chris Brooks said. But that was about the same number as last year.

The average age of AMA numbers, the nonprofit group said, is 58.

“The hobby itself seems to be pretty stagnant,” said Shawn Spiker, sales manager at Hitec RCD USA Inc., an 18-person plane and parts distributor based in Poway, Calif.

The hope is that park fliers “will bring in younger people to kind of replenish the people in it,” said Mark Schwing, owner of Electronic Model Systems in Yorba Linda and president of the Radio Control Division Council of the Hobby Manufacturers Assn., which is based in Butler, N.J.

The academy created a new, lower-cost membership category for park fliers called the Park Pilot program. It has signed up 2,070 people, Brooks said. The group has also launched a quarterly magazine devoted to park pilots.

“We are looking at the tip of the iceberg,” said the magazine’s editor, Jeff Troy.